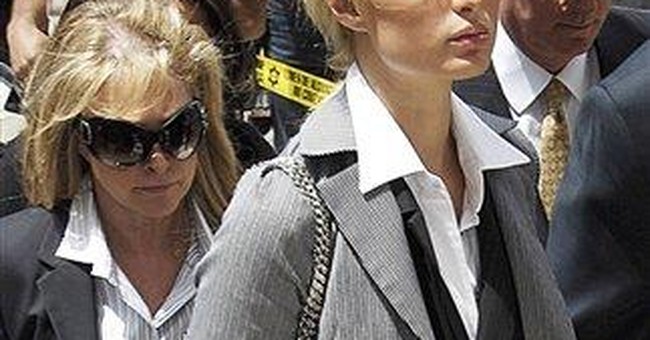 Anyone whose remote control wandered past an ABC, CBS or NBC morning "news" show on May 5 probably found the "news" hounds barking enthusiastically over this supposed "news" scoop: Paris Hilton was sentenced to Los Angeles County jail for 45 days. She violated parole after repeated episodes of reckless driving. This was news of national concern.

The morning anchors interviewed legal experts and professional Hollywood celebrity-stalkers to lament this heiress being brought low, complete with bad jokes about the jail being a "one-star Hilton." But they all wondered out loud: Who is to blame for this human train wreck?

Paris, being the thoughtless egotist that she is, blamed her publicist for telling her she could drive to work. That's baloney. You don't assign the "help" to read your legal documents for you.

Some blame the mother for botching the upbringing. No one's denying that Mama Hilton is a disgraceful figure in her own right, but that's still baloney. Paris is 26 years old and perfectly capable of messing up her own life.

Obviously, Paris ought to take responsibility for her own actions and stop living up to every cartoonish notion of clueless celebrity life. But there's a problem. Being a cartoonish notion of cluelessness is exactly what made her a household name, courtesy of the voyeuristic press. The media's celebrity exploitation machine needs to be denounced, both for its promotion of the raunchy underbelly of American pop culture and its hypocrisy for feigning concern over the damage Paris Hilton is doing to it.

Just see the gleeful reaction of Janice Min of Us Weekly when asked to assess troubled Miss Hilton for USA Today: "She had been out of the headlines for a few months, which in her world is an eternity. Headlines are her oxygen. ... She knows no shame, and that's why we keep watching. People like to watch people they don't like even more than watching people they do like." An Us Weekly poll of readers showed 80 percent of them wanted Paris in the slammer. Then they'll demand every inglorious detail, which Us Weekly will gladly provide.

Back in January, ABC's "20/20" acted shocked when man-on-the-street interviews revealed that nobody knew who cured polio, but many could name Nicole Richie's best friend. Earth to ABC: Did you ever think this could be your fault? This was the first time Jonas Salk had been mentioned on ABC ... in the 21st century.

In the meantime, Paris Hilton has been mentioned in thousands of stories. She is so famous and omnipresent in the celebrity media that she's become a rich-brat pop-culture reference point. Paris Hilton was the No. 1 "Google News" search of 2006.

Why can't the celebrity-obsessed media turn it off? If they can't just say no, then they should stop judging her, lest they be judged. There should be a national conversation about the media's role, and they should be convicted in the court of public opinion for enabling decadence. They are not really scolds and moralists. They are guttersnipes, feeding their audience a constant diet of "news" designed to build that rooting interest in the next perverse pratfall.

Look no further than a publicist named Ken Sunshine on NBC: "I think we want her to be more outrageous. We want her to get into more trouble. We want her to flaunt everything all the way. So, if anything, we want more Paris, not less Paris."

But the celebrity-exploiters raised her up to the pinnacle of fame. Without the spotlight, she might still be rich, pretty, blonde, wild and very, very stupid. But once this cartoon character has been created, there is an expectation that this is what she's been put on Earth to accomplish. She needs to implode so the rest of us can wallow in her misfortune.

The media won't stop, and neither will Paris Hilton. Just watch. She'll want to play this sordid game until she's the next Anna Nicole Smith.