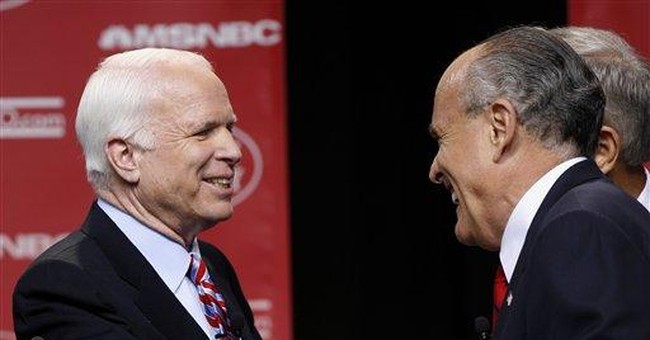 We've now finished the first two presidential debates, both on MSNBC. Pundits are debating whether they will make a difference in the race, but one thing is very clear: It's business as usual for the media moderating these things. The Democrats were treated to an amiable chit-chat among friends. The Republicans took round after round of hostile fire from enemies. Nothing ever changes. The Democrats are spoiled like rotten kids, and the Republicans are invited to sleep on a bed of nails -- and do so willingly.

But the dynamic now has been made even worse by the petulant petitions and protests of the censorious left, the ones who claim to be "democrats" but want to remove Fox News Channel from the news media. Leftists believe in a media strategy with all the sophistication of holding your breath and turning blue. Fox hatred is required. On the Huffington Post, author Carol Hoenig argued the Democrats should debate on Fox. Even so, her article was headlined "Fox News: A Cancer on Society."

It's about time the GOP put an end to this charade by refusing to debate on CNN or MSNBC when they employ left-wing political pundits who throw roses at liberal politicians while they hurl invective at Republicans. So why don't they take a stand? Because they're afraid of the consequences. The Democrats can refuse to debate on Fox News, and the other networks chortle. If the Republicans refuse to debate on MSNBC, they infuriate NBC, ABC, CBS, CNN, PBS and NPR.

So what? What are these networks going to do in retaliation? Stop covering them? The news media need both parties as much as the parties need the news media. Conservatives and Republicans should stop taking this longstanding injustice sitting down -- and if they take a stand, their supporters will cheer.

The left-wing campaign to "unseat" Fox News (as the anti-Fox "News Hounds" blog calls it) should be a rallying cry for the GOP. If the left wants to assert that Fox is not a "legitimate" news channel, then the right should go to the mattresses to reply that the so-called "mainstream" media are an illegitimate gang of shameless Democratic partisans with James Carville on their speed dial.

The left is deadly serious, making it crystal clear that it's not a joke when radio hosts warn about them cracking down on conservative speech with a new "Fairness Doctrine" if the Democrats take control of both Congress and the White House. They will go from merely turning down Fox invitations to turning off conservative talk radio.

What should conservatives do? Start with the debates. Conservatives probably cannot expect to face moderators who don't have Democratic politics on their resume, from Tim Russert to George Stephanopoulos to Chris Matthews to even Brian Williams (if you count being an intern in the Carter White House). This should not necessarily be a disqualifier. Let's remember that some anchors without party jobs in their past (Jim Lehrer and Gwen Ifill, both of PBS) have regularly leaned left in their debate performances. But Republicans and conservatives ought to be more forceful in demanding fairness and balance in the questioning these moderators provide.

The first line of defense has to come from the contenders themselves. On several occasions in the GOP debate, Mitt Romney mildly protested the premise of liberal questions that emerged. Chris Matthews asked, with a straight face: "Would it be good for America to have Bill Clinton back living in the White House?" "You have got to be kidding," Romney replied, a good answer that exposed this for what it was: a question straight from the liberal template.

The Washington Post refugees at Politico.com asked Romney another loaded question: "What do you dislike most about America?" One might argue that the ex-Posties were merely forwarding the Voice of the People, but of course they're choosing from a flood of e-mails, and to select something that dopey reeks of bad, and partisan, judgment. Can you imagine the uproar if Fox asked Howard Dean that one in the 2004 cycle?

Next, the GOP debate negotiators should start playing hardball and protesting up front when potential moderators are suggested. They ought not to suggest, but demand, a Brit Hume or a Chris Wallace as moderators. Further, they ought to do more to press for a panel of questioners to allow more diversity in questioning.

In fact, why don't the Republicans just have a presidential debate on radio with talk-show host moderators? Invite Rush Limbaugh, Sean Hannity, Laura Ingraham and so on to be the questioners. Why do Republicans always insist on playing by liberal media rules, on their field?

Finally, Republicans should mock the Democratic withdrawal from Fox with a loud, continuing question: How will Hillary and Co. handle Osama bin Laden when they don't have the courage to handle questioning from Brit Hume?