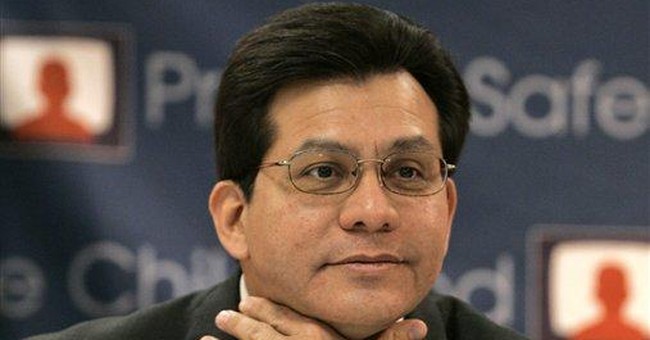 The top Washington story on Monday, March 26 came straight from the Sunday morning chat shows: the support for embattled Attorney General Alberto Gonzales was slipping, even among Republicans.

Which Republicans? There are conservatives who are not big fans of Gonzales, who would have preferred the president had chosen someone bolder, more confrontational, someone willing to make a case for conservatism. But none of those people were seen on ABC, CBS or NBC. Viewers saw instead the "even Republicans," the ones who specialize in ratifying the conventional liberal media wisdom, as in, "Even Republicans say Gonzales is cooked."

If the media think Gonzales is crippled and Bush is wretched, then it's not that hard for them to find Republicans who will spit that line back to them, for emphasis. They aren't Republicans. They merely play them on TV.

The tragedy is that the viewers, Republicans and Democrats alike, get a distorted view of what's really going on in Washington. Democrats out there think the Republicans are desperately on the ropes with no one to defend the executive branch. Republicans think their own politicians are all "linguini-spined" panderers, to borrow from Rush Limbaugh.

Can you blame them? On Monday morning's "Early Show" on CBS, viewers saw and heard only these Republican senator soundbites on Gonzales and his handling of the firing of eight U.S. attorneys.

From Sen. Arlen Specter: "We have to have an attorney general who is candid, truthful. And if we find he has not been candid and truthful, that's a very compelling reason for him not to stay on."

From Sen. Lindsey Graham: "But he has been wounded. He's going to have to come to the Senate and re-establish his credibility."

From Sen. Chuck Hagel: "But to say you can't have a transcript, the American people should not understand or know what's going on, it not be done under oath -- I just don't understand."

Liberals who claim there are too many Republicans on Sunday morning TV shows aren't actually listening to what's being said. This is like having a unanimous Greek chorus of Democratic talking points, but the song is coming out of Republican mouths.

On NBC's "Today," it was the same. The only Republican senators allowed to speak to NBC viewers were Specter, saying Gonzales has a "lot of explaining to do," and Hagel, insisting, "You cannot have the nation's chief law enforcement officer with a cloud hanging over his credibility."

There was, as usual, an exception. But these network reports ignored that conservatives appeared on the Sunday shows of Fox (Sen. Trent Lott) and CNN (Sen. Orrin Hatch). Both of them were blunt about how the White House and Justice Department bungled the U.S. attorney affair, but they also dared to offend the liberal media's scandal-manufacturing sensibilities.

"I see no evidence that anything illegal was done, or improper," said Lott. Hatch defended Gonzales as honest and decent, and maintained the White House has tried hard to be cooperative with Congress. They were not seen on Monday morning on ABC, CBS or NBC.

It is simply amazing that no one in the press is willing to stand up and expose the sheer, unbridled hypocrisy in the Democrat/pseudo-Republican line. Just start with the ridiculous notion that liberals cannot accept an attorney general with a cloud over his head. What about every Democrat that voted not to impeach President Clinton for lying under oath when pressed about his sexual predation of government employees?

No one has made an attempt to press Arlen Specter on why he would say we have to boot Gonzales, but he voted against impeaching President Clinton in 1999 despite his lying under oath about Monica Lewinsky. Specter nonsensically insisted on traditions in Scottish law, that the case against Clinton was somehow "not proved." He couldn't find Clinton guilty, or not guilty. He was a political void. All that went out the window when opportunity -- a friendly press corps -- came knocking about Gonzales.

Tim Russert has a reputation as a tough questioner, but he threw nothing tough at mealy-mouthed Specter on Sunday, unless you count the anti-Bush, anti-Gonzales questions, in which Specter was glad to sell out his fellow Republicans to Russert's satisfaction.

Many Republicans would have pressed Russert to ask the senator: "When you were vulnerable to a conservative primary challenge in 2004 from Pat Toomey, you had a $9 million campaign treasury that Dick Cheney, Andy Card and Karl Rove helped raise for you. Sen. Rick Santorum lost a lot of conservative support and probably lost his Senate seat in part for standing by you instead of endorsing his fellow conservative. Is this your idea of party loyalty or unity? Why should any of them ever lift a finger for you again?"

I'd love to hear the mealy-mouthed answer to that one.