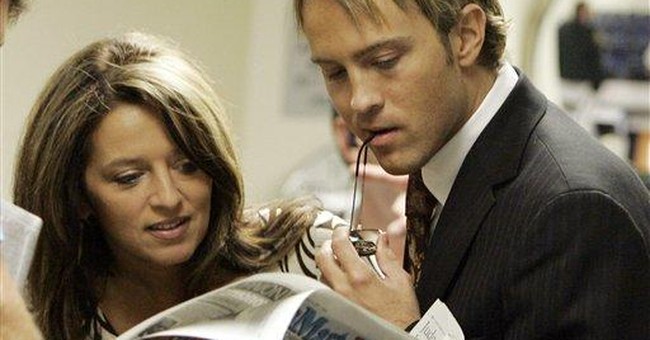 In her book reflecting on Pope John Paul the Great, Peggy Noonan told of her parents coming of age in a time when they didn't absorb religious art, but rather celluloid images of movie stars. They left religious faith and devotion to saints behind for icons of a different kind: "Bogie and Gable and Cagney and Bette Davis. We did not as a family go to church. But we never missed the Academy Awards."

In our own age, it is so much easier to get lost in celebrity worship. To own a television and to be considered even a novice with the remote control is to find yourself ubiquitously dazzled by a gargantuan celebrity culture. But there's a world of difference between what dazzled Noonan's parents and what obsesses this generation. The Bogarts and Gables and Cagneys were attractive based on the characters they played; today's stars are notable for who they really are. Yesteryear's celebrities were dashing, beautiful, romantic. Today, they make headlines only if they are controversial.

Today, we can find entire channels devoted to celebrities and obsess about everything they say, buy, wear, eat, cook, think. Their marriages and divorces, their babies and relatives, their arrests and addictions and recoveries -- we can easily be gorged on the excess of it all.

The celebrity culture is so omnipresent that it's almost mandatory to denounce how it's taken over our televisions, especially our news programs that are supposed to be about, well, news. We're bleary-eyed from ghoulish updates about how the corpse of Anna Nicole Smith is decaying rapidly and breathless announcements that the severed locks of Britney Spears could capture thousands of dollars on eBay. But then comes the distressed realization that by denouncing it, you're also adding to the attention paid to it.

It's clear that no one of sound mind should worship at the temple of Britney, or Anna Nicole, or virtually anyone else making splashes on the E! channel. The best thing you can say about the current celebrity journalism glut is that it's teaching an object lesson in How Not to Live.

And yet we're fixated. The executives at syndicated entertainment shows, celebrity cable channels and news networks find their ratings numbers rise like a Bundt cake whenever they obsess over these stories. It is we, not they, who are to blame. Until we decide to glide right by any network that's exploiting these tabloid sensations, this unhealthy state of events will continue.

It's sad to contemplate that the little girls of America no longer aspire someday to find a cure for cancer, to decide great cases on the Supreme Court or simply just to raise a family. Our popular culture challenges them instead to desire dancing in a skimpy outfit on MTV, boasting musically about impressing males with their sexual prowess.

And I do mean little girls. Specialists say that patients at anorexia clinics can be as young as five or six years old. Time magazine reported a few years ago that girls ages 7 to 12 -- "tweens" highly coveted by retailers -- spent $1.6 million on thong underwear. That adds up to a lot of parents who are driving indulgently to the mall and right past the danger signs.

Some parents have banded together to fight the trivializing, sexualizing trend. Activist groups like Dads and Daughters persuaded Hasbro to cancel a line of dolls based on the Pussycat Dolls -- the musical vamps known for their sexy songs and dance routines, and the lyrics "Loosen up my buttons baby" and "Don't you wish your girlfriend was raw like me?" And yet it makes you wonder: What was Hasbro thinking? From the designer of this obscenity, to the manufacturers, to the distributors, to the dark suits upstairs -- how were they not, all of them, disgusted by this soft-porn-for-kiddies idea?

Women who take every titillating shortcut to the Big Time are, ultimately, pitiful. How can supposed parents and friends and business advisers lead a Britney or Anna Nicole so far down scandal's path that sooner or later they all seem to be bound for the asylum, if not the morgue? The media cannibals who love chewing on them, and watching their profits soar as a result, are refusing to reflect, even for a moment, on the damage done to the children who gather at the temple of celebrity worship. But we -- a society that is not sufficiently ashamed of itself to denounce this cultural rot simply by walking away from it -- we are the ultimate enablers.