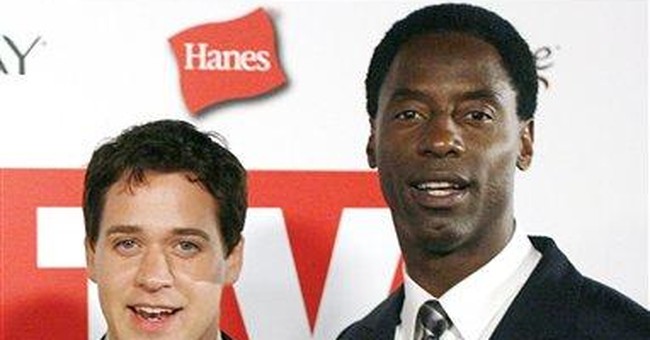 Whatever happened to the notion of washing a child's mouth out with soap -- or, if in the case of an adult, just smacking him in the chops if he insults someone with obscene or racist language? All that's out the window in Hollywood, where there's an entire regimented 12-step process of rehabilitation and "healing."

But the controversy blew wide open after "Grey's Anatomy" won at the Golden Globe Awards on Jan. 15 and Washington blurted out at a post-show press conference that he never called Knight a "faggot." In Hollywood terms, he'd compounded the original rumored offense tenfold, and alarm bells sounded everywhere. Hollywood was horrified, and ABC was mortified, issuing a statement that, "We have a longstanding policy to create and maintain respectful workplaces for all our employees."

The irony was rich and inescapable for Robert Peters, the president of Morality in Media. While insisting he had no intention to defend Washington's babbling, he nonetheless asked, "How do we explain the phenomena of TV executives and their high-priced actors being so deeply concerned about the sensibilities of adults in the workplace but so totally unconcerned about the well-being of children in their audiences?"

The networks fill the public airwaves with cursing and sexually charged conversation and simulated sex while countless children are watching, he said, and there are no apologies. (One need go no further than watching "Grey's Anatomy.")

In fact, the networks are in federal court at this very moment, suing for the "right" to drop F-bombs on children whenever they'd like. That F-bomb is OK for national television, but it's not OK for the new F-bomb to be uttered anywhere, even on the privacy of the set, even when it's between adults.

Once again, Hollywood looks hypocritical, so high and mighty about their vaunted right to shock and offend, to push every envelope and melt every taboo, and it doesn't matter how many they offend. But in their neighborhood there are rules, they have their own list of Seven Dirty Words you can't say, their own system of censorship and their own secular sacraments of penance.

We saw this in November, when comedian Michael Richards screamed the N-word at a comedy club, recorded on a cell phone. No one would rebroadcast the offending word, even as Richards was denounced in every venue. We can applaud that and ask: So why not the same standard for the other obscenities?

It seems that Hollywood bows before the god of Diversity, and the greatest blasphemous offenses anyone can commit all lie in the minefields of racial and sexual identity politics. Viewers across America squint at the TV screen and ponder the cultural code. You can have your characters have romantic liaisons with animals, stitch together multiple corpses for necrophilia and feed human limbs to tigers, but there are some lines of tenderness you cannot cross.

Washington had to apologize repeatedly, saying he knew the "power of words," and declared, "There are issues I obviously need to examine within my own soul, and I've asked for help." No doubt at the urging of his bosses at ABC, Washington then went through a laborious rinsing cycle enforced by the Gay and Lesbian Alliance Against Defamation (GLAAD), which regularly imputes that anyone using their new F-bomb is comparable to not only bullying, but lethal violence, putting homosexuals in "harm's way."

First, Washington met with officials of GLAAD to discuss how he would be involved with ongoing "public education initiatives." GLAAD President Neil Giuliano insisted Washington must "demonstrate his sincerity in becoming part of the solution to anti-gay bigotry," and lend his celebrity to their causes and events. Then, Washington declared his need to enter counseling for his "behavioral issues" and that he appreciated the "opportunity" to be rehabilitated. The executive producer of "Grey's Anatomy" also issued a statement insisting that Washington not only insulted the gay community, but "anyone who has ever struggled for respect in a world that is not always accepting of difference." He promised his network would "address the issue in a way that underscores the gravity of the situation while giving us all a foundation for healing."

Good Lord. Why didn't someone just take him behind the woodshed, teach him a lesson and save the rest of us this melodrama? And if rehab is the proper punishment for offensive behavior, why not apply it to those offending millions of children, and their parents, daily? There aren't enough Betty Ford Clinics on the face of this Earth to handle that.