A Speech to Denounce Meryl Streep

Brent Bozell and Tim Graham
|
Posted: Feb 24, 2017 12:01 AM
Share   Tweet
The opinions expressed by columnists are their own and do not necessarily represent the views of Townhall.com. 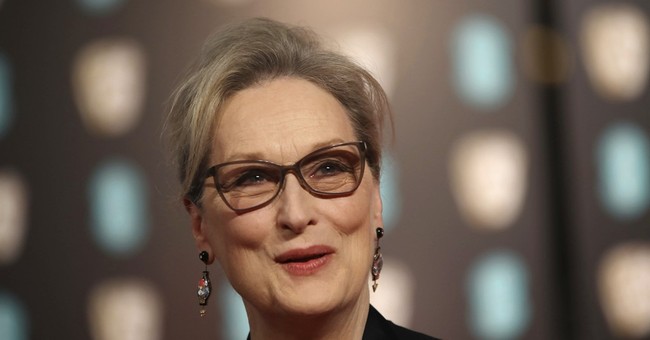 Trending
Actress Meryl Streep isn't just denouncing the dire state of America at Hollywood awards shows. She's now taking her speech to far-left events, recently accepting the Ally Award from the LGBTQ political-correctness police at the Human Rights Campaign. Since so many Americans will never get to stand on an awards show stage and speak their mind about what's wrong with the world, we thought we'd present a speech responding to Streep and what she represents.

"It is such an opportunity to present our thoughts on behalf of the broad swath of America that didn't earn the right to offer grand orations about politics and world history on national television because we took acting classes at Vassar and Yale. It is refreshing to speak up for people who don't complain about growing up inside what Meryl Streep calls 'the straitjacket of conformist suburban life.'

"Many Americans who chose not to vote for Hillary Clinton are now accused of being nostalgic for an America that never existed, or for an America that was a living hell of discrimination. But these accused Americans aren't exactly thinking of Civil War days. They are recalling heir own childhoods, during which the 'straitjacket' was the nuclear family, a civil society, a respect for God, uncontroversial bathrooms and televised awards shows without the blather of coddled megalomaniacs.

"Professional entertainers like Meryl Streep lament the existence of fundamentalists among us who oppose everything the forces of tolerance are constantly pressuring us to accept, lest we risk the wrath of the tolerance community. For the Coexist crowd, there is somehow nothing fundamentalist in saying there is no room for prayer in public life, no room for dissent on LGBTQ rights, no science in declaring that an unborn child is a human and no science in identifying gender by genitals. The Hollywood left that never let anyone forget a blacklist of communists is today identifying dissent from the leftist agenda as a firing (or never-hiring) offense. These alleged nonfundamentalists even denounce people who try to stay apolitical as ignorant or cowardly.

"Fundamentalists like Streep are celebrated by their peers as the nuanced voices, but they can only describe the agenda of their opponents in the starkest terms of an evil and emotional backlash -- forces of fear and ignorance, harassment and oppression. As artists, they claim to have the wildest and broadest imaginations, but somehow, they can't imagine that someone could arrive at an opposing viewpoint through study and reason and, dare we say, prayer from time to time.

"Worst of all, leftists like Meryl Streep think they are the ones who can quote Thomas Jefferson at us about the price of liberty being eternal vigilance. Since when has the left ever represented liberty? When has it promoted limited government under the Constitution? It thinks the Constitution is only there for its mysterious penumbras that somehow empower abortion clinics, enforce censorship that's called 'inclusion' and fight 'slut shaming' and 'rape culture.'

"Finally, the silliest thing Streep decried was that 'Disrespect invites disrespect, and violence invites violence.' Before she uncorks that lecture, she should reread every disrespectful thing she has launched at conservatives. As for violence, it's hard to proclaim that you oppose bullying while accepting an unborn child getting her brains removed. God bless you all. And at the risk of being really, really offensive, God bless Meryl Streep!"

Feminist Writer Finally Says the Quiet Part Out Loud Regarding Abortion
Townhall
People have thoughts about 'terrifying' videos of truck driver who 'ran down peaceful protesters' in Iowa
Twitchy
The Decision to Overturn Roe Shows That Chief Justice John Roberts Has Lost the Confidence of the Court's Conservative Majority
Redstate
Could AOC Be Getting a Little 'Insurrectiony' With Her New Revolutionary Friend?
PJ Media