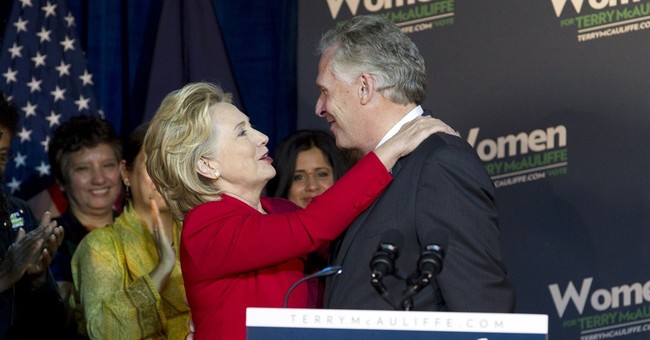 Trending
There may be no more misleading newspaper sentence in the Virginia governor's race than this one from reporter Carol Morello in the Oct. 26 Washington Post: "The two major-party candidates running for governor in Virginia are both practicing Catholics."

The Post did not ask McAuliffe where near his home in Fairfax County he attends church every Sunday and holy day of obligation, which is part of the definition of a "practicing Catholic." When radio show host Hugh Hewitt pressed him in 2007 about his church attendance after McAuliffe repeatedly cited his "Irish Catholic" bona fides in his autobiography "What a Party," McAuliffe shot back, "I don't pretend to be a priest, and I don't pretend to be citing ... I don't cite the Bible once in the book."

This is not how a practicing Catholic would respond.

When Hewitt asked how his liberal-stands clash with the church, McAuliffe snapped: "I wish I could follow 100 percent the teachings of the Catholic Church, but believe it or not, much to your chagrin, I am not Jesus Christ."

So a politician has to be Jesus to agree with Catholic teaching in public policy? Claiming membership in a church usually translates to some level of association on religious issues. As an ultraliberal, McAuliffe doesn't believe in Catholic dogma but in Planned Parenthood dogma, which stretches the definition of what is "Catholic" beyond all recognition. Morello and her editors would not describe someone who appears in steakhouse commercials as a "practicing vegetarian." McAuliffe is no practicing Catholic.

In fact, McAuliffe is running a transparently, viciously anti-Catholic campaign all over television, trashing Ken Cuccinelli as a woman-hating extremist for backing proposals that line up with Catholic-church teachings on abortion, contraception and divorce. Any reporter with 15 minutes to kill can discover that.

In the D.C. area, TV viewers are inundated with McAuliffe ads that claim, "Cuccinelli tried to ban common forms of birth control." Women echo: "Even the pill! Even the pill!" Then four people echo, one after the other, he's "way too extreme for Virginia." McAuliffe supporters in the "NextGen PAC" even accused Cuccinelli of "wanting to eliminate all forms of birth control."

Cuccinelli has never supported a bill or taken a campaign stand for banning contraceptive pills, and McAuliffe knows it. In 2007, then-state Sen. Cuccinelli supported a "personhood" bill that simply stated, "life begins at the moment of fertilization." Abortion advocates have twisted that simple sentence into some kind of church invasion of the state.

In another ad, McAuliffe trashed another of Cuccinelli's Senate proposals: "2008: Ken Cuccinelli writes a bill to give Virginia among the most extreme divorce laws in America. If Cuccinelli had it his way, a mom trying to get out of a bad marriage, over her husband's objections, could only get divorced if she could prove adultery or physical abuse or her spouse had abandoned her or was sentenced to jail." In another ad, a woman claims, "He tried to change Virginia's divorce laws to prevent women from getting out of a bad marriage."

This is why people despise political ads. McAuliffe's painting Cuccinelli as if he had proclaimed his biggest goal in life was to prevent women from divorcing abusive husbands. Cuccinelli offered a bill against no-fault divorce, but it was gender neutral and designed to make it tougher for parents to get divorced quickly. Childless spouses were unaffected.

"Studies show that the dissolution of marriage has long term negative impacts on children and those marriages that last for five years are much more likely to go the distance," he wrote. "For this reason, the state has an interest in marital preservation." Here again, the media and the feminists justify these wild exaggerations by noting Cuccinelli is friendly with "father's rights" activists. Men have rights when it comes to their children? Horrors!

Cuccinelli has every right to be disgusted by these ads. He told radio host Steve Malzberg, "I have never seen an opponent who just lies like he's taking a drink of water like Terry McAuliffe."

Finally, McAuliffe is anti-Catholic when he insists religious liberty is null and void under Obamacare. His website claims, "Terry believes that women in Virginia should have access to birth control through insurance." That is -- surprise -- Clintonian. Obamacare, which he supports, demands the public fund birth control. Abortion, too.

McAuliffe is demanding subsidized access to contraceptives, untrammeled access to abortion and easy access to divorce. His TV commercials insist that if you're religious and oppose that agenda, you hate all women and can't have any access to public office. Pope Francis and all his faithful flock are "way too extreme" to be trusted. This is The Washington Post's description of a "practicing Catholic."