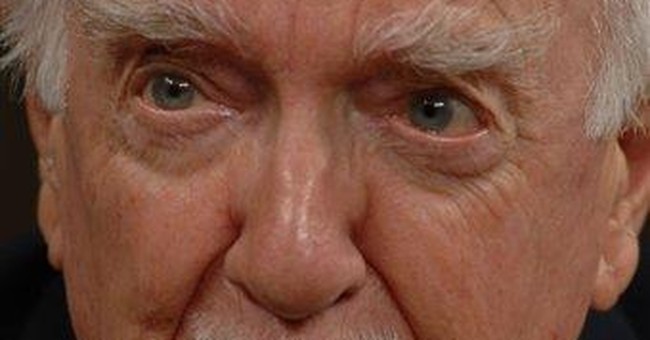 Like most of my draft-dodging generation, during the 1960s I heard Walter Cronkite’s authoritative voice more often than I heard the voices of my own parents.

I even ate dinner hundreds of times with the sainted TV journalist who anchored the CBS evening news from 1962 until 1981 and died last week at age 92.

I grew up on a nightly diet of TV news and commentary that was written, produced and spun by “the most trusted man in America” and his gang of liberal CBS reporters and commentators.

I had no choice but to eat so many family dinners with iconic Uncle Walter. My father the stockbroker was a pioneering news junkie, print and electronic; he wanted to watch/listen/critique the CBS evening news while we ate dinner, so we did.

In case you are too old to remember, the bloody 1960s and 1970s -- aka the Age of Cronkite -- was when the Cold War was often red-hot and the civil rights movement, the race to the Moon and the war in Vietnam were being fought, won or lost on the TV right in our living rooms.

The Cronkite Age was also a technologically backward, highly biased time for the TV news-consuming public.

VCRs, satellite dishes and TiVos were decades away. TV choice for consumers hadn’t been legalized yet in ‘60s America, where cable channels didn’t exist and the Big Three networks had the exclusive right by law to split the obscene profits to be made in commercial television.

Libertarians, Communists and other denizens of the left-right political fringes virtually did not fit inside commercial or public TV’s skimpy ideological spectrum, which with rare exceptions ran the gamut from liberal Democrat all the way to liberal Republican.

Ordinary mainstream conservative viewers like my dad were woefully underserved by broadcast TV in those overly regulated days. They had a whopping 3.5 left-liberal “choices” to tune into – CBS, NBC, ABC and PBS.

My dad, God bless his crazy opinionated departed soul, didn’t get a conservative Fox News Channel to call his own until the last 12 years of his life. But in the early 1960s, he was no passive, unquestioning recipient of liberal news and opinion.

He never considered Walter Cronkite and his leftish sidekicks Eric “The Red” Severeid or Daniel Schorr to be objective or fair-and-balanced journalists. As he monitored their news show during dinner, he’d rail intermittently about their real or imaginary liberal Democrat biases.

Naturally, we five kids thought my dad was completely nuts. We were even a little embarrassed by him, because no one else in our teeming suburban development in the south hills of Pittsburgh had a Catholic Republican father who yelled at the TV news all the time, liked Nixon better than Kennedy and got strange magazines in the mail like National Review.

Now, of course, I realize how lucky I was to get those early lessons in media criticism from my dad, even if he was often subjective, partisan and one-sided himself.

Sure. Uncle Walter was a great print and electronic journalist and a historic TV broadcaster. No one in broadcasting will ever again have the authority, cultural clout or political power he had – which is a very good thing.

He wasn’t always wrong. He eventually got it right on the un-winnability of Vietnam and he spoke out against the foolishness of the war in Iraq. Later he forthrightly declared the war on drugs another lost and immoral war.

But Cronkite loved and trusted government power too much and even thought it was time for the United States to give up some of its sovereignty to the idiots at the U.N.

Uncle Walter also never understood or appreciated that Fox News Channel was deliberately started to serve politically conservative Americans and counter the elite liberal bias of the mainstream news media – a bias he could never see because he was so much a part of.

To hear NPR and other mainstream journalism places eulogize Walter Cronkite last week as a nonpartisan or objective newsman made me laugh. But it would have made my late father yell at the TV again. As he would have quickly pointed out, liberals only think Cronkite was an objective newsman because he never said anything they didn’t agree with.