The Gamble in Gaza 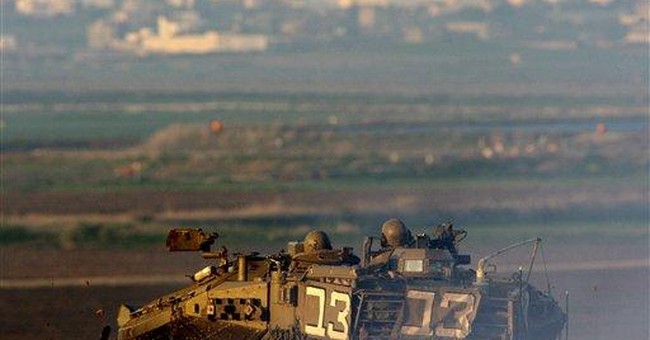 If anyone can explain the worst flare up of Israeli-Palestinian violence in the Gaza Strip in four decades, it's Aaron David Miller. For 20 years, until he became a public policy fellow at the Woodrow Wilson International Center for Scholars in Washington in 2006, Miller was a top Middle East advisor to six secretaries of state (Shultz to Powell). His specialty was formulating U.S. policy on the Middle East and the Arab-Israeli peace process. A regular guest on network and cable TV, a writer of commentary pieces for top U.S. papers, his four books include "The Much Too Promised Land: America's Elusive Search for Arab-Israeli Peace." I talked to Miller on Tuesday, Dec. 30, as the death toll from Israeli air strikes inside Hamas-controlled Gaza approached 400 and Hamas was continuing to use long-range rockets to hit population centers in Israel.

Q: For those who've never been there, can you briefly describe what the society and economy of the Gaza Strip are like?

A: It's one of the most densely populated areas in the world. It's primarily urban. A vast majority of Gazan residents live in Khan Yunis, Rafah and Gaza City. There are areas along the Mediterranean and areas to the north which are agricultural. They export citrus or at least in better times, hothouse flowers. It's a low-level industrial base. Per capita income is extremely low, unemployment is extremely high. There's no starvation, but over the last two years, particularly since Hamas rose to power, as a consequence of the international boycott -- which the Israelis have tried to orchestrate because it is trying to pressure Hamas into changing its policies - economic activity, trade and aid to Gaza have suffered. People get by using barter, family savings; a lot of non-lethal contraband - cigarettes, food, CDs - comes in through tunnels from Egypt. Other commodities are smuggled in by sea. There is a black market -- which the Israeli private sector participates in - in gasoline, oil, cigarettes, which actually characterized the situation long before Hamas got there - even when Arafat was in control. It's a dysfunctional environment made even more dysfunctional by -- at least when Fatah ran it -- a corrupt and divided leadership; and the Israeli occupation, even though Israel no longer occupies Gaza. They withdrew unilaterally in 2005. It's a society under tremendous stress.

Q: Gaza is neither a free, sovereign state nor an occupied one - so what is it?

A: It's not occupied any longer, although the occupation has not ended in the sense that the Israelis continue to control the borders, air space and access more or less by sea; the Egyptians control the southern access. But again, it's a porous border. It's not part of a state. It doesn't have international sanction as a state. It's part of the Palestinian Authority, even though Hamas - which is opposed to that authority at least in the person of Mahmoud Abbas, the president of the Palestinian Authority -- rules and rules with a fairly centralized grip. It's not a theocracy or religious state, despite the fact that Hamas represents the Islamic manifestation of Palestinian nationalism. You can buy almost anything in Gaza, but clearly after Hamas' policies of governance, there is clearly more of a conservative bent.

Q: Is Hamas the chief cause of the current escalation in violence?

A: You know, it's an interesting question. I would argue that the ceasefire no longer continued to serve the interests of either side. The Israelis grew increasingly impatient by Hamas' disregard for what they believed to be the informal rules and accommodation, particularly in terms of willful shelling of Israel's southern communities, particularly since the ceasefire came to an end on Dec. 19th. The Israelis have been engaged in a frustrating negotiation trying to get their kidnapped corporal, Gilad Shalit, back, who was kidnapped by Hamas in July of 2006.

Hamas was growing increasingly frustrated by the boycott and the economic siege of Gaza, and probably concluded that since it is an organization whose reason for being is armed struggle -- it's very nature is to resist and oppose - that it was worth taking a chance on continuing to push and test the Israelis, to find out what their limits were. The Israelis, who are still living under the shadow of their disastrous performance in the 2006 Israeli-Lebanon war, were determined to make a point that Israel still is a military power and it needs to be respected both by its friends and enemies.

I think that's how you might explain the intensity and ferocity of the Israeli assault. It's an effort to destroy Hamas' military infrastructure, to kill as many of its operatives as possible, to degrade its capacity to rocket northern Israel and to generally undermine its authority and to make clear to the Palestinian public - the 1.5 million Palestinians who live in Gaza - that in essence Hamas is the cause of the problems and their misfortunes. I doubt if the Israelis will succeed in that goal because, take it to the bank, it's a law of political gravity in this conflict: Palestinians will always be angrier at the Israelis than they will be at their own leaders.

Q: Can Israel break the will of Hamas and prevent the rocket attacks without invading or re-occupying Gaza?

A: Invasion won't break Hamas' will over time. Re-occupation would be a nightmare for Israel - hundreds of soldiers would be killed, as well as international opprobrium for their reaction. The Israelis are too smart to re-occupy. I think if they launch a ground incursion, it will be designed to follow up on what their air strikes couldn't achieve and will be in direct response to Hamas' residual capacity to continue to launch rockets. As far as the Israelis are concerned, I would guess that they would judge the operation has succeeded so far. But it reminds me of the joke about the guy who jumps out of the 18-story building and someone leans out the window as he passes the 12th floor and asks "How are you doing?' And the guy says, "So far so good." It's a lot easier to get into a war - as we know - than it is to get out of one.

Q: Some say the civilians in Gaza are being unfairly punished by Israel. Do you think that is true?

A: I do. I think it makes no sense to try to punish Hamas by making life unbearable or miserable for the million and a half Palestinians who live there. It's without logic, this strategy, because it's not going to topple Hamas. It may well be that an Israeli military incursion won't do that. It's simply going to breed and generate the kind of resentment, anger and hatred for the Israelis and by implication for the United States. It doesn't make any sense. If I were king for a day, I'd be flooding Gaza with aid.

Q: Does Israel know what it is doing?

A: I think in the short-term, the answer is "yes." And I think it has learned a great deal from its mistakes in Lebanon. But there is always, as the CIA would describe it, "blowback" - the law of unintended consequences, if you will. There is no way to predict what the impact of a ground incursion will be - one misplaced artillery shell; scores of civilian casualties; disproportionate Israeli losses; a lucky Hamas hit on an Israeli convey. This could still go extremely badly for the Israelis, which is one reason I suspect they don't want to go in on the ground - but I suspect they will.

Q: As opposed to going in on the ground, what should the Israelis do?

A: The problem with violence, insurgency and war in the Middle East, unless there is a political outcome, you wonder what the purpose of it is. The October '73 War, the first Persian Gulf war, the first Palestinian Intifada, all led to political agreements because there was a political pathway fashioned by both sides, or by an outside mediator, which enabled the violence to be put to good use. The violence broke "the frozen table," so to speak, and in shattering the frozen table new opportunities were available. I don't see this happening. It's very difficult for me to see a political pathway out of this, which is why it's going to be extremely difficult for Barack Obama, who will inherit this crisis in a little more than three weeks, to manage or diffuse it.

Q: What is the U.S. position on Gaza now and is it the correct position?

A: The U.S. position is that the Israelis have a legitimate reason to strike. There is no indication whatsoever or effort to constrain, restrain or stop the Israelis. There is a subtext from the current administration - and I suspect if Barack Obama were president today and the Israelis had done this, that his reaction would be no different from the one we see right now - which is essentially "Get Hamas, just try to kill as few civilians as you can."

A: In response to this particular operation? I don't think the Obama response would be much different at all.

Q: In the long run is there really any way to permanently fix the situation in Gaza?

A: Well, Gaza is part of a much broader political solution. The question you ask is part of a much broader question: Yes, you can fix the situation in Gaza, if you create a Palestinian state which is contiguous and viable; one that agrees to live in peace and security with Israel. Yes there is a way, but it's going to be extremely difficult and right now there is no conflict-ending solution that's available - it's about management.

Q: When someone comes up to you and says we've been trying to create peace in the Middle East for 60 years. It seems to be the same old problems over and over again. If someone asks you "Why is the United States wasting its time, money, human beings on trying to solve these problems?" what do you say to them?

A: I say this is one of the few foreign policy issues where three very important things come together: No. 1, we have a national interest. Our enemies capitalize on an unresolved Arab-Israeli conflict; our friends are weakened by it. No. 2, we have a moral interest; it's the right thing to do. Aside from the Islamic-Judeo-Christian heritage, which now affects millions of Americans in this country, this Holy Land - or, arguably, not-so Holy Land - is of profound importance. And finally, the most important piece: The U.S. has a demonstrated track record - when we are tough, smart and fair - in making a bad situation better; we have had successes. So these three things come together in a way that is unique and unparalleled. And it's for that reason that I think it's important for the United States to engage - but to engage as one Kennedy once described "as an idealist without illusion." We need to see the world the way it is, first of all, not the way we want it to be.