Don't Bail Out the Big Three 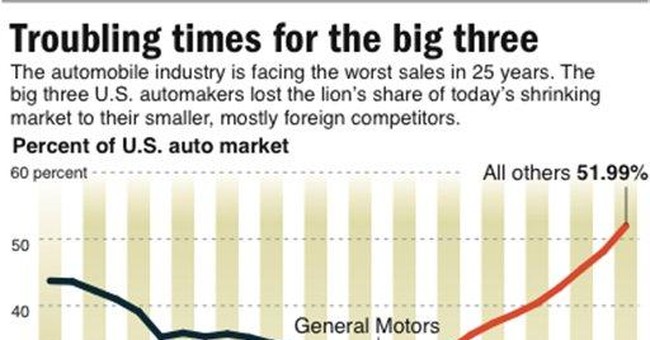 Is the impending collapse of America's Big Three automakers the next "crisis" that must be solved by a massive federal bailout? Most politicians of a certain ideological or geographic bent think so. But Dan Ikenson, the associate director of the Cato Institute's Center for Trade Policy Studies, thinks GM, Ford and Daimler-Chrysler needs a shakeout, not a bailout. I talked to Ikenson Thursday, Nov. 13, by phone from his office in Washington.

Q: Does the auto industry deserve a bailout?

Q: What's the worst thing the auto industry has done to put itself in this fix?

A: Well, I don't knowhow to rank them, in particular. But two things strike me as particularly problematic. On the product side, management demonstrated an egregious failure of leadership by never envisioning the day when SUVS and big trucks would fall out of favor. In the 1980s, the Big Three made predominantly cars. And over a 20-year period they have shifted to predominately SUVs and trucks. I think in 2006 about 75 percent of Ford's output were big trucks and SUVs; slightly smaller for Chrysler and GM. Now those are high-profit margin cars for them, so I can understand why they would want to produce those. But you have to diversify your products and you can't just rely on trucks and SUVs.

If you look at the top-10 selling passenger cars this decade, the Big Three offerings make that list at slots 7, 8, 9, 10 occasionally. None of them has ever been in the Top 5 this decade. Those are always occupied by the foreign nameplate products - the Honda Accord, the Toyota Camry, the Nissan Altima. I don't know if we should start this story back in the 1960s and 1970s, when the Big Three never thought they were going to face competition from anybody else and therefore they could give lavish benefits to the unions and stop caring about the products they made, or if it is something that has happened more recently.

The other big problem they have is they agreed to these ridiculous work rules. At GM, you can't really lay off a worker and therefore reduce costs commensurately. Laying off a worker at GM requires that you pay 90 to 95 percent of their salary for the period of the contract. You've heard of these job banks where people are paid not to work. So if you're in an industry and you're facing contracting demand and you want to slow down your output, you can't really get the benefits of slowing output if labor is a fixed cost. You need to be able to cut your costs. The foreign nameplates can do that, but GM, Ford and Chrysler have been sort of crippled in that capacity.

Q: Have the Big Three been victimized to any special degree by either dumb or highly fallible government policies?

A One of the examples I'm hearing from proponents of the current bailout is, "Let's go back to 1979 when Chrysler was bailed out. That was a success story. Chrysler came out of bankruptcy and paid back the U.S. taxpayer with interest after four years." Well, to me, the fact that the government stepped in back then has been an enabling implicit guarantee for the Big Three ever since. Had Chrysler gone under back then, I am convinced that the unions would not have had as much power as they had during the 1980s, because they would have been dealing with two companies instead of three. So they would have had less leverage. So had Chrysler had gone under then, the "Big Two" might not be in the position that they are in right now.

Q: They'd be a lot healthier too, business-wise, because they'd be sharing parts of Chrysler's market share.

A: Exactly, and that's why I say we shouldn't need a bailout now. All we need is a little bit of a shakeout. If GM were to go under, those companies are going to get much larger market shares. Even though demand is contracting, getting increased market share in a contracting demand environment market still could translate into increased revenues.

Q: Is there anything GM, Ford or Chrysler can do right now to save themselves?

A: I don't know if there is anything they can do in the short run. If the government is going to help them out, if they are going to ask the government to do anything, they should ask the government to make sure that the unions don't get violent when the Big Three tell the unions they are severing their contracts. They need to go back to Square One with unions and say, "Look, we're either not going to deal with you at all or we're going to deal with you on much more realistic terms." You can't pay people not to work. The average compensation at GM is $75 an hour; at Toyota it's $47 an hour. If that fundamental issue is not addressed, there's no point in thinking much further into the future. There's just no way they are going to be able to compete. That's why I think the $25 billion bailout is a complete waste of money. It doesn't address the problem.

Q: If it is OK or necessary to give money to financial companies and banks to keep them from going under, why is it not OK to prop up GM or Ford?

A: My easy answer to that is that it wasn't OK to bail out the insurance giant (AIG) and the financial firms and the banks. I was opposed to that, as were my colleagues. One of the things that we saw happening was that this moral hazard was going to emerge and you were going to see industries throughout the country unleash their most powerful weapons on Washington - and that is their lobbyists. The lobbyists are lining up right now. There's a big pot of money here in Washington to be doled out and it's going to be doled out to the industries that make the sharpest cases - that push the right buttons, pull at the right strings.

To engage your question in a more treacherous manner, I think there is a distinction to be made between bailing out the financial system and bailing out a manufacturing industry. This country could survive without an auto industry at all. If the Big Three and the nameplates were gone, we would find a way to move forward. There would be some adjustment, but we don't need an auto industry in this country to survive. But I think we need access to credit, and I think we need banks. So in that regard I think that that industry is more important to us than the auto industry.

Q: What about the idea that if GM or Ford went under it would be an economic catastrophe because of all the lost autoworker jobs but also because of the effect it would have on all the businesses that service the auto industry?

A: Yeah. There is something to the argument. I think the Michigan congressional delegation; Gov. (Jennifer) Granholm and Center for Automotive Research are engaging in massive hyperbole here. They have anticipated a response like one that I have, which is, "Let's let one of them fail and see what happens." Their response to that is, "Well, one of them won't fail. If one fails, the other two go down -- and all the supply network and all the related jobs that go with them and then we're talking several million jobs."

I don't agree that that's going to happen. It's counter-intuitive. If one of them goes down, yes, some of the parts suppliers that supply one of them exclusively, GM for example, will be in trouble if GM goes down. But the parts suppliers that supply Ford and Chrysler will suddenly see their orders increase. So I don't buy the linkage that lands us in this situation where we lose 3 million jobs.

Certainly, there will be some job loss. But let's face it; this is an economic recession that we're entering. That's what happens when economies recede. Congress, the president, can not insulate every American from every form of pain. I'd like to be able to say that nobody is going to lose their job and their salaries will continue to rise in real terms, but that is not going to happen. If the government stays out, they will be sorted out. There will be some pain, but the pain will be more short-lived and the solutions will be determined more quickly.

Q: What should the government - the politicians, really - do about the current plight of the automakers?

A: I think there should be an announcement that this is a free-enterprise system; that the bailout of the financial industry was determined to be absolutely necessary for the well-being of the country because everybody needs credit, but we can not continue down this road rescuing every firm that is in trouble. First of all, we can not afford to do that; and secondly, that is unfair to those companies that have made the right decisions. If you subsidize the companies that have made the wrong decisions and that are not leading us into the future and that are not making the investments in the new technology, then you're explicitly penalizing companies like Honda, Toyota and Nissan because they've made the better decisions. In a competitive enterprise system, the ones that make the good decisions should rise to the top; the ones that make the bad ones should fail. That's really not the kind of action the government is going to take, because the government regrettably - the Congress - thinks its role is to buffer people from pain.

Q: So what do you think the government actually will do?

A: They're going to want to do something and in my view there will likely be a bailout. But I wouldn't call it a bailout. It's not a bailout. It's simply tossing money down a pit. The beneficiaries of that will be Nancy Pelosi, Harry Reid, the Michigan congressional delegation, Gov. Granholm. They'll be able to say, "Look, we went to bat for you. Now do what you can with it." But in four or five months when they come back, it will be Barack Obama's chance to lay down his vision of what he wants to do - and hopefully demonstrate that he's not going to capitulate to these left-wing labor politics and say "No, we're not doing this. You were here four or five months ago. We gave you $25 billion. You just used it for operating expenses and prospects aren't good. Let's introduce you to the bankruptcy process."