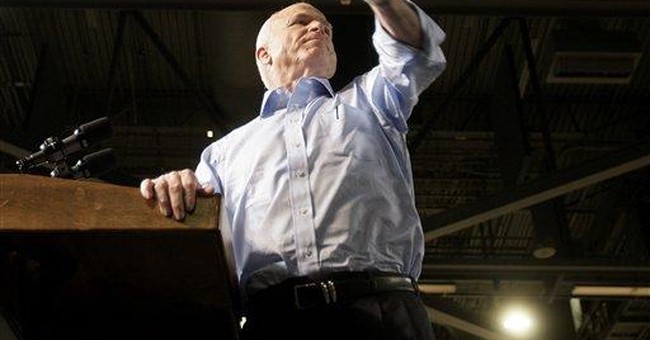 Are John McCain’s economic values and policies sound? Does he really believe in free markets and cutting taxes and regulations? Is Alaska Gov. Sarah Palin a real government reformer? If anyone knows the answers to these questions, it’s Pat Toomey, the former congressman and fiscal watchdog from Eastern Pennsylvania who almost unseated Sen. Arlen Specter in the 2004 Republican primary.

Toomey, 46, talked up as a possible Pennsylvania gubernatorial candidate in 2010, is the president and CEO of The Club for Growth (clubforgrowth.org). It's a national grass-roots network that advocates public policies that promote economic growth and prosperity and provides financial support to congressional candidates who passionately believe in limited government and economic freedom.

On Thursday, the day after Palin’s big speech at the Republican National Convention, I called Toomey at his office in Washington, D.C.:

Q: What is the club’s No. 1 goal today -- as it relates to the presidential campaign?

A: The policy goal that I think is most important is to find a way to extend the current tax rates. In other words, to make permanent or at least extend the tax cuts that were put into effect in 2003 and which are set to expire.

Q: What have you found out about Sarah Palin’s tax and economic policies in Alaska?

A: We are still poring through some of the details but, on balance, I think it’s pretty clear she is a committed reformer. She has been willing to take on the establishment within her own party, including the old-boy network of Alaska. She has cut spending. She has cut taxes. I think the evidence is that she believes in free markets and has been willing to stand up to some pretty powerful forces to advocate what she believes in. We’re very bullish on Sarah Palin.

Q: Is she better or just relatively better than her peers in other state capitals?

A: In terms of standing up to corruption and RINOs (Republicans in name only) in her own party, she’s much better than almost anyone else. The only other person who I’d say is on the same level as Sarah Palin is Mark Sanford, the governor of South Carolina. I say that because you know how rare it is for an elected official to challenge an incumbent within her own party. Sarah Palin did that against the sitting governor of Alaska and defeated him. Then, when Sean Parnell challenged Don Young, the 35-year incumbent Republican House member from Alaska, Sarah Palin -- as the sitting governor at the time -- endorsed the challenger, which is just unheard of and just tremendous evidence that she is committed to her principles and not to the political establishment.

Q: There has been criticism floating around that she was for “The Bridge to Nowhere” before she was against it, that she raised taxes on oil companies and that she was a happy recipient of certain earmarks as a mayor. What’s your comment on those charges?

A: She may well have advocated for some earmarks that I would rather not have seen. I’m not suggesting that she’s the perfect candidate; I’m just saying that she’s a really good one. As far as “The Bridge to Nowhere” goes, and other matters for that matter, clearly she’s the one who made the decision to put the kibosh on the bridge, despite the fact that it was mostly federal funds that were going to build it. Maybe it took some thoughtful consideration on her part, maybe she didn’t come to that conclusion immediately at first blush. I don’t think that’s a criticism. She came to the right conclusion and she was definitive about it. She deserves a lot of credit for that.

She did support a tax increase on oil companies in Alaska, and frankly that’s something I am concerned about. However, I think it’s very important to consider the context in which it occurred. Tax legislation affecting the oil companies had passed prior to her taking office and it was later discovered and confirmed that certain oil industry executives had bribed members of the Legislature to ensure that the legislation passed in a form that was acceptable to them. Part of what Sarah Palin did upon taking office was to make it very clear that people were not going to bribe their way around the will of the people and the Legislature. So I think part of the motivation for that tax increase was to undo the corrupting influence that had gotten them to that point.

A: It’s generally quite good. Sen. McCain has had some apostasies from our point of view over the years, and the glaring one was his opposition to the 2001 and 2003 tax cuts. But Sen. McCain has long since advocated that those tax cuts be made permanent and in fact has now been consistently advocating that we lower the corporate tax rate, which is about the second highest among all the industrial countries in the world; he’s exactly right about that. He has spent an entire career fighting wasteful spending and, in particular, earmarks. He’s not new to this battle. He’s been fighting this for ages. He’s always been an advocate for free trade and continues to be. He voted against the new entitlement program that the Bush administration pushed -- the prescription drug bill. He votes against the farm bills, including the most recent one.

On economic policies, generally speaking, I think Sen. McCain is very much on the right path. There’s one other worrisome area in which he departs from what we think is the right policy and that’s his advocacy for a cap-and-trade bill on CO2 emissions, which we think is very misguided policy and could be devastating to economic growth. We hope that he’ll come around on that, but on virtually every other area that’s important for maximizing growth and prosperity he has taken very solid, very strong positions.

Q: On a 1-to-10 scale, 10 being perfect, where does McCain sit on the club’s rankings -- or do you not try to quantify everyone?

A: We’ve never done that. I’d be reluctant to suggest a numerical representation of that. We did a series of very detailed white papers on the records in office of the various Republican presidential candidates when they were all running. We gave Sen. McCain very high marks on the areas where he was good and we were very critical where we disagreed. But on balance he’s really been defending the right positions on economic growth generally.

Q: Who are some of the politicians the club has supported?

A: In the Senate, for instance, the two great examples are Sen. Jim DeMint from South Carolina and Sen. Tom Coburn from Oklahoma, neither of whom would have won their elections without the support of the Club for Growth and both of whom have the enthusiastic support of the club from the beginnings of their campaigns. On the House side, the Club for Growth has supported people like Jeff Flake, Jeb Hensarling, Mike Pence, more recently John Campbell, Tim Walberg in his upset defeat of incumbent RINO Joe Schwarz -- and the list goes on from there.

Q: How does Sen. Obama compare to Sen. McCain on economics?

A: Well, it’s really breathtaking how stark the contrast is. Sen. Obama is without a doubt the most liberal Democratic nominee for the White House since George McGovern in 1972, but probably going back even before that. He’s promised us massive tax increases. He’s promised us a reversal of a pro-trade position that our government has taken for years, including under Bill Clinton. He’s promising massive new spending. He advocates all kinds of new government regulations and control over the economy. I’ll give him credit for being very clear about where he wants to go -- it’s a collectivist, redistribution, government-control-of the-economy economic model, which of course has proven to be a spectacular failure everywhere it’s been implemented. So naturally we’re pretty frightened about what kind of economic policy we’d get if Barack Obama became president.

Q: Is there any great book or economic work that you wish Sen. Obama would read that would set him on the right path?

A: Yes, there would be many. I would suggest that he could start with Adam Smith, because Adam Smith sort of explained the fundamentals of free markets and how and why they work. That’s a concept that Barack Obama clearly doesn’t grasp. He could also go with more contemporary works, such as Hayek’s “The Road to Serfdom” or Milton Friedman’s “Free to Choose” -- anything by Friedman would be great.

Q: It always kind of disappointing when someone as educated as Obama, and people like him, don’t have a much of clue about where Adam Smith and Milton Friedman are coming from, much less guys like Hayek.

A: It is. A number of them actually are reasonably familiar and conversant with the work of these guys, but they reject it because for them redistributing wealth and redesigning society in the image that they approve of is more important to them than overall prosperity.

Q: In general, is the Club pleased or disappointed by the Bush administration’s economic and tax policies of the last eight years?

A: It’s been mixed. The truth is it’s been very mixed. The Bush administration deserves great credit for their tax policy. The tax cuts were not only substantial in magnitude, but they were very constructive in the types of tax cuts -- lowering the taxes on capital gains and dividends, lowering all marginal income tax rates. Those were very, very conducive to strong economic growth. On trade, the president has generally been an advocate for expanding trade and that has been very constructive. On spending, however, we’re very disappointed that the president chose never to veto a Republican spending bill, many of which richly deserved to be vetoed. We were very disappointed that he chose to create a big new entitlement program within Medicare, which he did. He put up a good fight on the farm bill and deserves credit for that, but wasn’t able to win that fight. It’s a mixed record, unfortunately.

Q: In the long run, which direction is the country headed in and is it the right or wrong one?

A: I think in the long run we are very much headed in the right direction. I’m very optimistic about the future. Winston Churchill probably had it right when he said “America always does the right thing -- after exhausting every other possible option.” So we’ll make our mistakes along the way.

But I look at some of the huge victories of the free-market conservative movement: Barack Obama, for instance, believes that it is necessary for him to tell the American people that he’s an advocate for a big tax cut. It’s not true; he’s an advocate for a huge tax increase. But the fact that he has to pretend he’s for lower taxes is really a huge victory in a way for us. Even in his wildest dream, he is not advocating going back to the marginal tax rates that we had under Jimmy Carter, for instance. Nor is he advocating huge regulation of the type that we had in the 1970s.

So as much damage as he would do, we’re still in much better shape than we were in the 1970s. I don’t see us going back to that. And I think that since free markets work, and free enterprise works, even if we do lose some ground and backslide, people will figure out what the cause was and will demand the kinds of reforms that Reagan gave us. So long run, I think we’re going to move in the right direction.