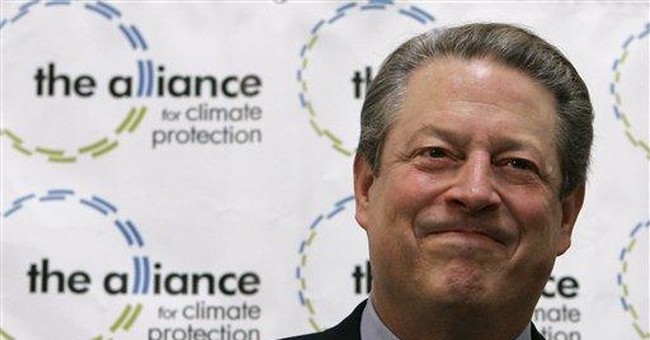 You've no doubt seen the stories about strange snowfalls in Saudi Arabia. A brutal winter in China. The heaviest snow cover in North America, Siberia and elsewhere since 1966.

And if you are a vigilant observer of the global warming debate, you know how inconveniently cold it is in the Arctic this winter for Al Gore and his army of climate alarmists.

But how cold is it, Johnny?

Well, NASA says recent satellite images show that the allegedly endangered polar ice cap -- which will melt completely one of these summers and kill off all the polar bears if we don't slash our greedy carbon footprints and revert to the lifestyles of medieval peasants -- has recovered to near normal coverage levels.

As far as Google's search engine knows, Comiso's comforting report has appeared nowhere but in Canada.

There's even better news for polar ice-pack lovers from ice expert Gilles Langis, who says Arctic ice is now even thicker than usual in spots. A senior ice forecaster with the Canadian Ice Service in Ottawa, he's another scientist you shouldn't expect to see talking to Anderson Cooper on the next episode of CNN's "Galaxy in Peril."

Meanwhile, in other news too climatically incorrect for U.S. mainstream media to touch, California meteorologist Anthony Watts says January 2008 was the planet's second-coldest January in 15 years.

Even more shocking, the average temperature of Earth dropped significantly from January 2007 to January 2008. As Watts explains on his Web site wattsupwiththat.wordpress.com, he determined the lower figure by crunching data from four major public and private global tracking sources.

You may remember Watts from last summer. He popped up in this paper and on Fox News because of his self-funded project to quality-check 1,221 ground weather stations around the country that are used by NASA to measure the "official" average annual temperature of the United States.

So far, Watts and his volunteers have checked out more than 500 weather stations (none in Western Pennsylvania) to see if their temperature data can be considered credible. As he details on his other Web site, surfacestations.org, nearly 70 percent of the sites fail to meet the government's own standards because they are not 100 feet from a building, are on blazing rooftops, sit next to air-conditioner exhaust fans, etc.

Watts was shocked and surprised to find such unequivocal proof that Earth's temperature has cooled in the last year, he said to me Wednesday. But he's very cautious about what it means in either the short or long run.

Calling it a "fluctuation" and "a large anomaly" compared to the 30-year running temperature average that climatologists use, he emphasized that the cold spell is "no indication that global warming is over" but does "illustrate that the driving mechanisms behind our planet's climate are still very much in control of changing the climate and that the planet's not in the death grip of CO2 just yet."

A careful, honest man of science, all Watts would say for sure was that his findings and all the strange cold-weather events of this winter prove only one thing so far -- that "Mother Nature is still in control of things, not us."