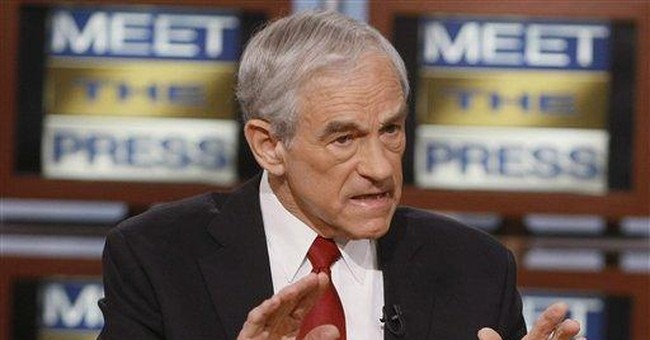 It won't matter how high Ron Paul finishes in the Iowa caucuses this Thursday or in the New Hampshire primary Jan. 8 or anywhere else.

Despite the fact that his ideas and his unconditional devotion to the Constitution are exactly what America needs, the Pittsburgh-raised libertarian doctor and 10-term Texas congressman isn't going to become the Republican presidential nominee.

In Iowa, he's been averaging about 6 percent in polls, though a Dec. 20-23 poll by the American Research Group shows him hitting double digits for the first time at 10 percent. In New Hampshire, he's been hovering around 7 percent or 8 percent.

The actual vote totals may turn out higher. But he and everyone else who hasn't lost his grip on political reality has always known that America's future doesn't include a President Ron Paul.

Yet Dr. Paul -- arguably the closest thing to a libertarian America's voters have seen since Grover Cleveland -- has already succeeded beyond his and any liberty-lover's wildest dreams.

In April, shortly after he announced he'd run for president, Paul told the Trib that his goal -- besides winning, of course -- was to make an impact on the race and to spread his ideas about maximizing freedom, limiting the federal government and practicing nonintervention overseas.

Though his presence at the debates has shown what a bunch of unprincipled, flip-flopping, war-loving, faux conservatives Messrs. Romney, Giuliani, Huckabee and McCain are, Paul's political impact on the primaries has been minimal -- so far.

The "Paulistas" who are fomenting and funding "The Ron Paul Revolution" in the virtual streets of the Internet complain that the mainstream media have ignored Paul. But it's not true.

He could be the most widely publicized libertarian politician in U.S. history.

He and his "radical" ideas have been publicized, praised or treated with respect by everyone from the constitutionally impaired Tim Russert to Jay Leno, Stephen Colbert and Tucker Carlson.

Carlson -- perhaps Paul's biggest fan on TV -- recently traveled the campaign trail with Paul in Nevada and wrote about it for The New Republic.

Carlson observed the same humble, charisma-free candidate I saw late last June when Paul came to Pittsburgh to visit his old house as part of a "Today" show series on "Candidate's Cribs."

Paul, as debate-watchers know, is the anti-Mitt Romney. But Carlson notes, correctly, that Paul's seriousness and lack of political slickness is a large part of his appeal.

"His fans don't read his awkwardness as a social phobia, but as a sign of authenticity. Paul never outshines his message, which is unchanging: Let adults make their own choices; liberty works. For a unified theory of everything, it's pretty simple. And Paul sincerely believes it."

Paul has shocked the political establishment by attracting a zealous Web-connected army of young people and raising $20 million, almost exclusively over the Internet.

But sometimes winning the election isn't what matters in the long run. Ideas do.

Remember Barry Goldwater? His crushing defeat in 1964 reinvigorated conservatism and spawned the Reagan Revolution. In a country still cruising down the road to socialism, Ron Paul's success in selling freedom is a sign of hope.