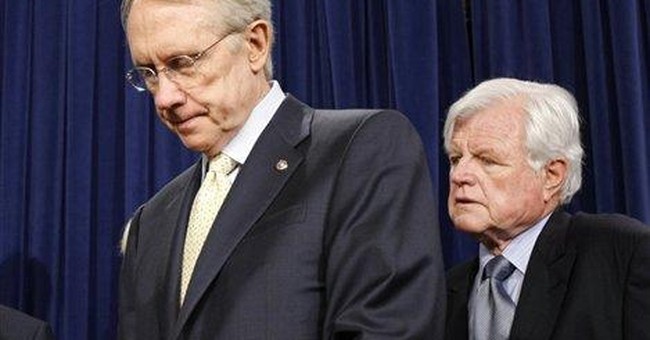 For most conservatives and Republicans, The Wall Street Journal long has been a trusted source of political and economic enlightenment. When it comes to immigration policy, however, many conservatives disagree fiercely with The Journal, which strongly supported the immigration reform bill that was killed in the Senate last month. As editorial page editor, Paul Gigot is boss of The Journal's famously persuasive and well-written editorials. I talked to Gigot about immigration -- a problem his paper has argued has been "inflated" -- by telephone on Thursday, July 5, from his office in New York City:

Q: Are you -- editorially speaking -- pleased or displeased that the immigration reform bill died in the Senate?

A: I had problems with the Senate bill. But I think that bringing some rationality to our immigration policy wouldn't be such a bad thing -- particularly if the people who say they want, in the wake of 9/11, to know who is in the country. Then you're going to have to do something to give an incentive to bring those people out of the shadows and make them legal. Because you can shout all you want about amnesty, but if you don't give them that incentive, they are going to stay where they are and they're not going to become legal. The people who killed the immigration bill are going to have to live with the status quo and I hope they like it.

Q: What aspect of the bill was the least tolerable to The Journal?

A: I don't recall all the details ... but one thing that we didn't like was the way the guest-worker program turned out to be so constricted. I think they cut it in half and then they removed a market escalator. The whole point of a guest-worker program is to basically allow the labor force to move up or down with labor demand, so that if there are a lot of jobs waiting to be filled, people will come over, fill them and then go back. If you only have a cap of 250,000 or something, it's inadequate.

It would have bureaucratized things and made it more complicated for businesses. I also thought that the part with dealing with high-tech immigrants was inadequate. There just weren't enough slots there. And some of the enforcement stuff probably went overboard. I wouldn't have liked that sort of thing.

From a policy point of view, I'm not all that upset that it failed. There could have been worse outcomes. You could have foreseen a worse bill. Also, we weren't really demanding reform. In an odd kind of way, the people who most want to do something about immigration are those who ended up killing the bill. They were the ones who made a big thing out of it and have been trying to make a big issue of immigration for years.

And yet when politicians finally made an effort to do so -- including some very conservative politicians like Jon Kyl of Arizona -- they turned against it, largely on this question of amnesty, which I think is mostly a phony issue because there are 12 million people -- maybe 11 million, maybe 10 million, maybe 14 million, I don't know -- who are illegal. They're here. And we're not going to deport them. And we're not going to round them up. So I guess if you want to pin a defeat on Bush and do it around the amnesty slogan and feel good about yourself, fine. But I'm not sure what they accomplished.

Q: Last year Reason magazine made the provocative statement that the immigration "crisis" was not a national crisis at all.

A: I would agree with that. I didn't read the Reason piece. But I don't think it was a crisis, as it was somehow portrayed. I do think in the wake of 9/11 it would be nice to be able to have better track of who's here. That was part of this effort. I do think we could do a much better job of allowing willing workers to come here legally, particularly through H-1B work visas (for skilled, well-educated foreign workers) and in agriculture, where there are real labor shortages.

We have businesses coming through talking to us all the time saying they just can't get an adequate supply of workers to harvest crops in different parts of the Southwest and West in particular. And then high-tech companies saying, "Look, if I can't get the engineers here, we're going to have to offshore increasing amounts of our high-value added intellectual work. I don't see how that's an American national advantage.

Q: We know what the current immigration system is -- a bunch of bad laws and too many bureaucratic rules and regulations that are either unenforceable or deliberately not enforced. But what should our policy be?

A: I think we should first of all have relatively liberal quotas for immigration. I don't know what that is. That could be worked out in Congress -- but liberal. Easily upwards of a million or a million-and-a-half legal immigrants a year -- I'd have no problem with that.

That would be a legal means to come into the country.

If they wanted to rejigger the system so that it took more account of skills as opposed to family ties, I don't have a problem with limiting family reunification to immediate core family as opposed to aunts and uncles and grandparents and so on. That's again a detail I don't feel passionately about.

But you have to have a legal system that accommodates the realities of the labor market and the needs and requirements of the U.S. economy. That's what we too often don't have now -- certainly in the formal sense. In the breach, it does work -- because they're illegal! They come over and they get forged documents or they get a Social Security number the government can't keep track of. But nonetheless most of these folks come here, they work, they contribute to our society and they're peaceable and they make a difference. They even pay into the Social Security system without any anticipation of future benefits. So they do all kinds of good for us.

But you have to have some kind of system which allows for a free flow of people going back and forth, even if it's on a temporary basis.

One of the things you hear from businesses, particularly out West, is that before they started cracking down on the border, tens of thousands of people would come over for a day or a week. In Yuma and even farther north they would come in and they would help during harvest season -- pick the avocados, pick the lettuce -- and then they'd go back when there wasn't a job.

But now, with the crackdown on the border, perversely, it gives some of them more of an incentive to stay longer and therefore become illegal longer. So there is a bit of the law of unintended consequences here, as well, which I thought conservatives understood. But now the conservatives that I hear -- or at least the loudest voices of the immigration debate -- seem to care less about economics and they talk more about this issue of illegality and national security and then, of course, also about culture.

Q: Why is The Journal's position on immigration out of step with many conservatives?

A: I guess given the current debate we've had, I'd have to admit that we have some pretty big disagreements with some self-described conservatives on immigration. But that's not new. We've always had that disagreement. Going back to the mid-'80s when Simpson-Mazzoli (the Immigration Reform and Control Act of 1986) was being debated, we opposed Simpson-Mazzoli, we opposed employer sanctions.

We used to have very loud disagreements with Al Simpson, the senator, and Ed Meese. We even had a disagreement with a fellow by the name of Reagan, who signed that bill. We've also had disagreements with conservatives over the years on trade. There's a protectionist element to the conservative movement -- and always has been -- on trade of goods. The kind of national-interest argument, the commercial-and-industrial policy branch of the conservative movement -- there's always been that.

There's always been conservatives who are hostile to immigration on grounds of culture -- "We don't understand these people. They're from a different culture. They don't share out values.. This group won't assimilate." And there are people who say the Mexicans won't assimilate in the same way that people said the Irish couldn't assimilate and said the Chinese couldn't assimilate. The people who would stress culture above economics have always had something of an anti-immigration bent. Don't get me wrong: I'm not saying that economics is the only thing that matters. Clearly, there is a cultural component to the American system that is important -- that belief in our founding and its rule of law. I think assimilation matters.

I wrote columns about doing away with bilingual education in California. I'm very much against that. I wrote columns and editorials opposing quota systems -- racial composition: breaking people up by defining them by race and allocating slots in schools or jobs or whatever

I think some people on the right let those leftists define the argument and what they miss is what is happening among average Mexican-Americans and Hispanic-Americans -- those who are fitting into American culture, American life; who are fitting into the workplace; whose sons and daughters learn English (even if their parents don't); and who intermarry people of other races. I think that miracle of assimilation is still taking place. I concede that some of the critics have a point and that we have to be mindful of that. But I think The Journal's position is immigration and assimilation.

Q: What do you say to people who say that giving amnesty to illegal immigrants who are here now -- either now or later -- undermines the rule of law?

A: (Deep breath.) Do you think it'd be any worse than the undermining of the rule of law that's occurring now? ... There is a rough understanding that if these people come here and work we're not going to treat them like felons -- because it's not a felony. I'm not saying there aren't felons who are illegal because there are. But I just don't see it as some kind of major crime. I really don't.

We have this kind of rough contract which says that if you come here to work, you do so on terms that we offer. And we're not going to enforce this too aggressively because the cost of that enforcement is far greater than the benefit we get from allowing these people to lend us their talents and take jobs that we clearly want them to take.

Q: Do you foresee any piecemeal reforms coming along that will address some of what you would consider the real problems of immigration policy?

A: In the current political environment it's going to be difficult too see much that will pass. There's always been a majority in the Senate for this ag-jobs bill, which Larry Craig of Idaho and a couple of Western senators have that would create a more fluid, rational system for allowing agricultural workers to come here. That you could see pass the Senate. I don't know if it could pass the House in the current environment before 2008. And then there's an awful lot of movement on the H-1B visa front because the demand for labor there is so acute.

I think the argument is powerful that if we don't offer those people jobs here, a lot of these companies are going to offshore more of their work to India or China or wherever you get a really smart, educated work force. There might be something there, although even that in this current environment would be hard to get because nobody wants to go around right now and make the case for more-open immigration without some kind of companion border enforcement.