Why Not A Global Free Market For Workers? 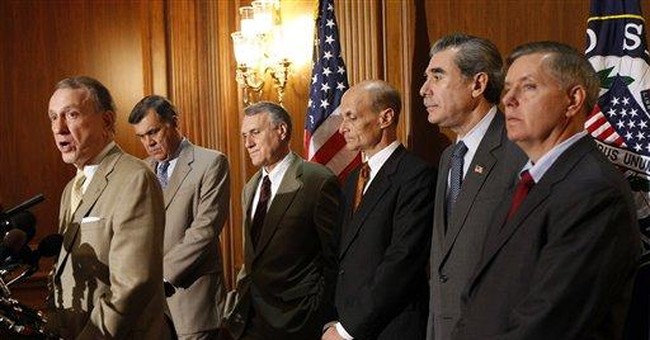 No one really expected the bipartisan compromise reform bill that President Bush, Ted Kennedy and their allies assembled in the Senate to fix immigration.

The now-derailed "grand bargain" -- which most conservatives hated -- was, as Rudy Giuliani said, "a typical Washington mess."

It mixed a bunch of tougher border security measures and employer sanctions that would never be enforced with a bunch of drawn-out legal steps that would slowly but surely have provided amnesty for the up to 20 million illegal immigrants trespassing among us.

All of which begs the depressing question: Can we ever hope to develop a rational, humane, win-win immigration system that will allow millions of foreigners to come here to work or live (permanently or temporarily) without wrecking our economy or culture?

Yes, says journalist-economist Philippe Legrain. He's the author of a soon-to-be published book, "Immigrants: Your Country Needs Them," which contends that rich countries and poor countries both benefit if more immigrant workers -- even uneducated or low-skilled ones -- are allowed to move more freely across national borders.

He's concerned about moral and pragmatic issues, but his main argument is a fundamental economic one: We live in a global economy. We are all made better off when capital, goods and information circulate freely among advanced and underdeveloped nations. We'd also all benefit if human labor -- high-skilled and low-skilled -- could flow across international borders with the same ease.

It sounds shocking. But as Legrain shows, human migration from poor countries to rich countries is an old, growing and virtually unstoppable global phenomenon.

In the U.S. today, 1 in 8 people are foreign-born immigrants -- legal and illegal. But Germany’s ratio also is 1 in 8. Canada’s is 1 in 5. Australia's and Switzerland’s are 1 in 4. The EU has at least 8 million illegal immigrants. Perhaps 400 million earthlings do not reside in their country of birth.

Legrain concludes that we -- i.e., the rich, aging, depopulating countries of the West to -- need the poorest immigrants as much as they need us. He contends that despite the well-documented short-term costs imposed by immigrants, they are a net long-term economic plus (as America and other countries prove).

Legrain argues that putting up fences doesn't work and only hurts people and distorts labor markets. Ideally -- or surreally, if you prefer -- he believes “it would be best if our borders were completely open.” In the real world, he says immigration should be lightly regulated so that the free market -- not bureaucrats and politicians -- can satisfy the shifting international demands and supplies of labor.

That trust in laissez-faire capitalism may sound naive. But as Legrain points out, since 2004 Great Britain has completely opened its borders to the 75 million people living in Poland and seven other poorer East European countries. Immigrants can now freely fly to London and start businesses or seek work at wages five times higher than they can get at home. Nearly 1 million workers have done just that.

Legrain is brave to push the provocative idea of allowing a free global market in working people. But even he doesn't touch the biggest American immigration dilemma -- what to do about the tens of millions of illegals now here. He's apparently leaving that job up to the next president and his/her allies in Congress.