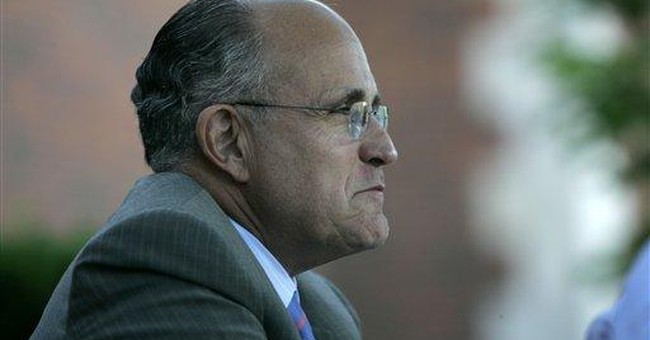 Rudy Giuliani recently presented his 12 Commitments to the American People. Simply put, it’s his vision for America. And as he explained, his 12 Commitments are intended to lift our vision from the rear view mirror to the road ahead. It set the stage for one of the most significant contrasts of governing priorities in recent political history. I am proud to be a member of his team.

The leading Democratic candidates for President appear committed to the failed policies of the past. More than once they’ve called for higher taxes to solve America’s problems, and I trust they’ll do everything they can to deliver on that promise. But we don’t need the tax and spend philosophy of big government Democrats. We don’t need more non-binding agreements. And we certainly don’t need to tell our enemies our military plans in the Middle East. What we need are solutions, and the Democrats aren’t offering any.

Rudy Giuliani’s 12 Commitments to the American People offer solutions. They also contain accountability measures for the Federal government and fiscally conservative principles to restrain government spending. And Rudy has the track record of strong, proven leadership to accomplish these tasks.

Mayor Giuliani sees the challenges of today clearly and his 12 Commitments are designed to hand our nation over to the next generation far better than it was handed to us.

First and foremost, Giuliani will keep our nation on offense in the terrorists’ war on us. Since September 11th, we have been fortunate to have stopped further terrorist attacks on American soil. If we are going to keep America safe, we must be realistic about what’s needed to win the battle against the Islamic terrorists who wish to destroy our way of life.

Preventing future terrorist attacks includes securing our borders and ending illegal immigration. Three of the six terrorists recently thwarted at Fort Dix were in the United States on expired visas. To ensure we successfully stop such attempts in the future, it is paramount that we know who is in our country, when they are arriving, why they are here, and when they are leaving.

It is clear that energy independence is no longer simply an economic or environmental concern. It is a national security issue as well. It is simply unacceptable that we are financing our enemies around the world. Reducing our dependence on foreign oil must be viewed as a necessity. It is a challenge we can meet through diversification, ample innovation and conservation.

Keeping America on offense against terror also means we need to ensure that every community in America is prepared to respond to both terrorist attacks and natural disasters. America has had wake-up calls on both fronts in recent years, and we know we have to be better prepared going forward

The Mayor understands that threats to our national security do not occur in a vacuum. We need to expand America's involvement in the global economy and strengthen our reputation around the world. Free enterprise, global trade, and the thirst for freedom had just as much to do with the fall of communism as did our highly effective military build-up.

Leadership also requires the willingness to face our problems for what they are and to take responsibility for putting in place effective solutions. Leaders solve problems. The Mayor recognizes that our national government must adapt to the new challenges of the global economy. If we do not reduce taxes and streamline our overly complex tax code, we soon will lose our competitive advantage.

Growing our economy also means restoring fiscal discipline and cutting wasteful Washington spending. Wasteful spending is absolutely unsustainable for future generations, and if we’re to tackle this challenge we need to throw out our antiquated way of thinking about the budget and restore true fiscal conservative principles.

Perhaps the biggest contrast between Mayor Giuliani and the entire field of candidates, Republican and Democrat, is that he will impose accountability on Washington and has the track record to back it up. You cannot manage what you do not measure and Rudy will launch initiatives modeled after his highly successful CompStat crime reduction program. CompStat forced the NYPD to take responsibility for making New York City safer. It was an accountability program with principles that were later applied across New York City government. Rudy will use those principles to transform the government in Washington the same way he transformed government in New York. These empirically-based initiatives will make the federal government more accountable, whether reducing the size of the Federal bureaucracy, securing our borders or preventing terrorist attacks.

Another major commitment is improving our quality of life by giving Americans more control over and access to health care through affordable and portable free-market solutions.

Undoubtedly, making health care more affordable also means reforming the tort system. No candidate better understands the law than Rudy. We can count on him to reform the legal system and appoint strict constructionist judges who will interpret the law rather than legislate from the bench.

And as President – just as he did while Mayor – Rudy will increase adoptions, decrease abortions, and protect our children’s quality of life.

Showing that all of these forward-looking ideas for our country are intricately linked, Mayor Giuliani recognizes that at the intersection of quality of life issues and economic growth is access to a quality education. Rudy will help every child in America get a better education by giving real school choice to parents.

Mayor Giuliani believes our nation’s best days are ahead, and if we stick to our core values of freedom, faith, and opportunity, we can give our children an even better America.

This summer, as the Mayor travels the country giving a series of speeches detailing these 12 commitments and his plans to make them happen, he’ll present the case that nothing energizes a government and a people more than challenging all of us to reform, change and improve this country.

Rudy made it work for New York City as Mayor, and he can make it work for the rest of the country as President.