The Pope and Rush Limbaugh 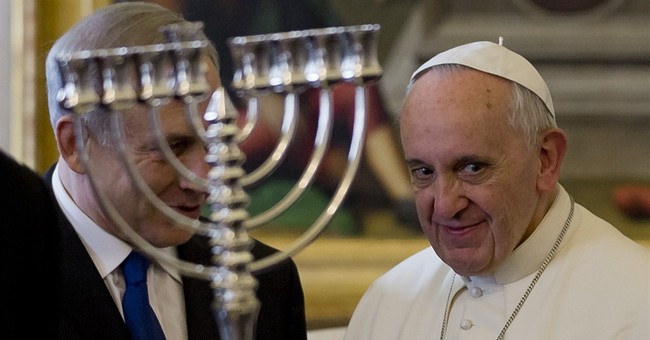 You'd have thought the president of the NRA had called for the tarring and feathering of mourning dove hunters! All it took for Pope Francis to bring down on himself the Wrath of Rush Limbaugh last week was to disrespect -- or appear to be disrespecting -- capitalistic economics, in the context of calling for a new Christian evangelism.

"The worship of the ancient golden calf," said the pope, "has returned in a new and ruthless guise in the idolatry of money and the dictatorship of an impersonal economy lacking a truly human purpose." Further: "The culture of prosperity deadens us; we are thrilled if the market offers us something new to purchase." There was, to make matters worse, some severe language regarding "trickle-down economics" and that good old Darwinian notion called "survival of the fittest."

Raw, bloody meat, all of this -- the cause of widespread fuming and fumigation. "This is just pure Marxism ... actually unbelievable," said Mr. Limbaugh, who spoke for many of my brother and sister conservatives. Liberals, by contrast, jumped for joy and satisfaction. This made things worse yet from the conservative perspective. What would be next -- a papal bear hug for Obamacare?

Lost amid conventional media blather concerning the 47,560-word apostolic exhortation "Evangelii Gaudium" ("The Joy of Evangelism") was any real sense of what Francis was up to: summoning the church to put off torpor and present Christ to a world in need of him. "I invite all Christians everywhere," the pope said, "to a renewed personal encounter with Jesus ... I dream of a missionary option, that is, a missionary impulse capable of transforming everything ... " And more of the same -- much more.

Amid tumult over the healthcare.gov website and animated speculation over who can beat Hillary, Francis addressed mankind's spiritual calling. He shoved political matters to the side. More properly, he spoke of the world's conundrums in the context of God's love for the world. What kind of talk was this? Many wished to know.

It was religious talk. That was the problem. The pope's holistic view of the human condition broke across boundaries and surged down side roads, as well as broad boulevards familiar from the 6 o'clock news. He wanted to save souls! What an idea -- one that meant submitting the whole human enterprise to divine oversight: in the name, yes, of freedom. "God's mercy has willed that we should be free." Really? How would that be? To talk of freedom is to talk of politics and economics -- isn't it?

From the chair of Peter, the view is more encompassing. The mercy of God that leads to freedom, mercy apportioned to the weak as well as the powerless, the poor and the 1 percent, is the divine property the people would show the world. Economics, Marxist or classical, is a means -- just that, a means -- to the end the pope would show the world: barriers leveled, hatreds stilled, vices quenched before the throne of God. This, according to no economics text; according, rather, to historic Christian understandings: "My soul doth magnify the Lord, and my spirit hath rejoiced in God my savior ... for he that is mighty hath magnified me, and holy is his name ... " And on from there, to a better place, by grace.

Mercy, grace, love -- the pope's language isn't well understood in a world that's wide open to self-satisfactions of every kind and set against human limitations. The robust evangelism for which Francis calls will have a rough goings on on the right and the left and all points in between. By the Christian yardstick that Francis brandishes, Man (meaning, of course man (SET ITAL) and (END ITAL) woman) isn't the measure of all things, far less an economic tool or widget. Man, in Christianspeak, is the image of God.

We may believe or disbelieve. The new pope -- who makes people's eyes pop nearly every time he speaks -- sees with different eyes. His gaze sweeps across the immensity of time. Evangelism is the joy and the sacred purpose he commends to the church, whoever dwells in the White House.

A slightly bedazzled Episcopalian can only wish him well.