How Times Have Changed Since 1963! 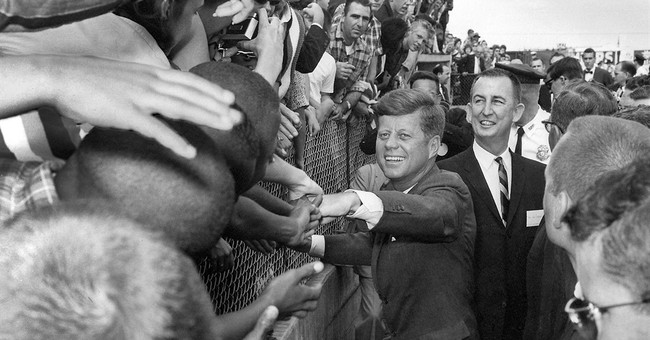 Would John F. Kennedy have sought to shove national health care down the national gullet? The question takes on poignancy in a week full of Kennedy look-backs and looks all around at the works, the style and the obsessions of Barack Obama.

We could put the question another way: Is Obama the spiritual heir to the president slain in Dallas 50 years ago this week?

Inviting disagreement as well as affirmation, I reply: No way, no how. It is a conclusion that would startle many -- from across the political spectrum -- who thought they saw in JFK and his fellow New Frontiersmen the start of a new radicalism. We have learned in the last 50 years what "radical" really means. It means, among other things, disconnected from respect for the delicate mixture of good and bad in every human arrangement. It means, let's send attributes such as prudence and judgment and caution to lie in the road so a truck can run over them. It means, stick it to others rather than ourselves -- and let the devil (though no good radical really believes in an antiquated figure like Satan) take the hindmost.

Kennedy failed all of the above tests. He was no radical. He was no Barry Goldwater either, yet it seems worth noting that Goldwater, who had served in the Senate alongside him, regarded Kennedy as "a helluva nice of fellow ... a very, very fine man" -- an assessment unlikely to have been levied in favor of a stuff-government-down-their-throats kind of guy.

None of Kennedy's policies, foreign or domestic, departed dramatically from those he had inherited. He actually promoted tax cuts!

The radical at the New Frontier revels turned out, startlingly enough, to be the homely Texan who succeeded Kennedy in the White House. Lyndon Johnson decided the time had come to reconstitute America, going beyond the principle of equality to the enforcement thereof, backed by federal dollars and power. He declared war on poverty, raising expectations that the government could somehow or other underwrite happiness; he thrust the federal snout, via federal funding processes, into the realms of education, hitherto a state function, and into health care via Medicare.

The top-down, or toss-the-dice approach, was Johnson, never Kennedy. At least it was the new Johnson, whom no one, least of all his Texas constituents, had ever seen during his pragmatic, difference-splitting days in the Senate.

It is fair to say that some of what Lyndon attempted, worked, such as the extension of federal protection to the voting rights of Southern blacks. The war on poverty, by contrast, fizzled. Medicare fed into -- guess what? The Affordable Care Act.

The familiarity of Medicare after 48 years of experience disguises the limits of dice throwing. The system needs a major money infusion in order to continue.

Never mind that, says the current president and his Congress, who are rolling the dice more grandly, swaggeringly and with bigger stakes than ever before, as they corral one-sixth of the U.S. economy.

The Kennedy style -- caution, a certain prudence in action, a defensiveness when it came to government overreach -- looks better than it looked at the time. We might have appreciated it better at the time if we could have recognized Kennedy caution as the last remnant of old-style American skepticism as to the efficacy of federal meddling in affairs large and small. The founding principles of the republic had included faith in the ability of "the states and the people respectively" (in the language of the Tenth Amendment) to address most of their own problems. The New Deal undermined that principle; the Great Society, under Johnson, knocked it in the head.

We didn't know in November 1963 what was coming our way. Who could have foreseen the likes of Obama, Pelosi or Sen. Reid -- or for that matter, the Clintons? The dam burst after Nov. 22 1963, on account of powerful, pent-up forces pounding hard against the spirit of restraint. The American past -- the past of responsible freedom -- no longer inspired, no longer satisfied. It was onward to the Affordable Care Act.