Hey, Have Some Inflation! 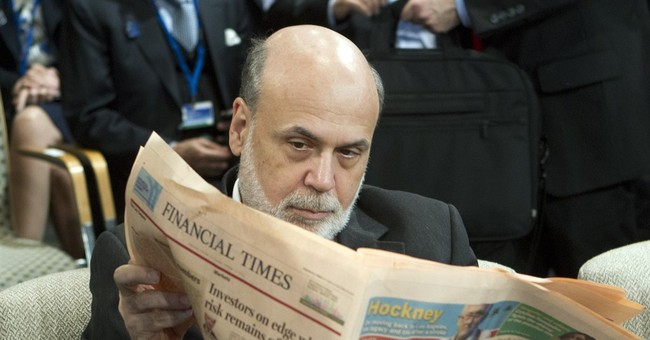 Proving that bad ideas never go out of style among particular kinds of people with particular mentalities, The New York Times advertises on its front page "the growing concern inside and outside the Fed that inflation is not rising enough." And, yes, that something ought to be done about it!

More inflation. I can't wait. What we seem to need, on the reckoning of various "progressives," as well as some corporate types, is -- I infer -- more sustained effort by the Federal Reserve to print money. More money chasing a more or less constant supply of goods and services drives up prices as buyers bid for what's out there. As prices rise, everything costs more. Buyers start to anticipate price increases by spending now. Labor unions demand bigger paychecks. Bigger paychecks pump money into the economy. But not just any economy, rather, an economy disoriented by instability. People are unsure of what's ahead and, accordingly, uncertain how to plan. They are fearful and anxious.

That's the inflation society many of us inhabited thirty-odd years ago. Oh, what fun is in store for us if the likes of Kenneth Rogoff, the Harvard economist and a source for the Times' article, get their way.

Rogoff thinks the economy could be salubriously stimulated through policies pushing inflation to 6 percent a year.

The assumption, I gather, we are to take away from the article is that, having triumphantly achieved 6 percent, we'll keep 'er right there. Perhaps we'll throttle down later. That 6 percent might be as low as we go for a while -- a long while -- is a point that never comes up in the story. What if the Fed, with a new loose-money chairman, Janet Yellen, figures we've done six, now what about seven? What's above seven? Ah, yes -- eight. Then nine, and so on. In the '70s we got shot past 12. It looked as though we would go up and up and up, until a new Fed chairman, Paul Volcker, hit the brakes sharply. He raised interest rates. Borrowing fell, and with it fell the thirst for more inflation.

The topic is a familiar one for the many who attended the champagne party put on by Washington in the '70s -- here, have some more inflation, it's good for you; or who saw wage-price controls invoked futilely as a cure for rising prices (Just say Stop!). The topic, I say, is one we hoped not to see broached again. Of course, we know why it's being broached again. There are two reasons.

The first is the economy. If there's not enough spending and investment out there to create the jobs we need, then let's just throw some money out there and let people fight over it. Price stability becomes the villain of the piece. Boo! Hiss! Where are the rotten vegetables?

In fact, the problem isn't price stability. The problem is the present federal government's unwillingness to invigorate the economy through spending restraint and tax cuts that encourage entrepreneurs and visionaries to start companies or expand payrolls.

This brings us to the second reason for why some desire a joyous reunion with inflation. A certain kind of personality, as I have hinted, believes with fervency in the uncanny ability of "experts" to prescribe and control economic inputs and outputs. The Harvard faculty is conspicuously of that kidney. Prof. Rogoff mentions 6 percent inflation as if he knew with certainty precisely the right dosage and precisely the right length of time to administer it. This is the fantasy of the centralist, the administrative-state acolyte who is confident always that knowledge and insight count for more than the whirl and tumult of the marketplace.

There have always been such people. There always will be. The trick is to keep them in their place by ignoring them, by insisting on the historic truth that choice in the free marketplace always delivers better results than direction from above. How would we know this? Well, from reading history. Or from looking around.

That business of assigning Washington, D.C., the responsibility of determining how Americans get their health care -- how's that working out right now? Just asking.