Why Wendy Davis Won't be Governor of Texas 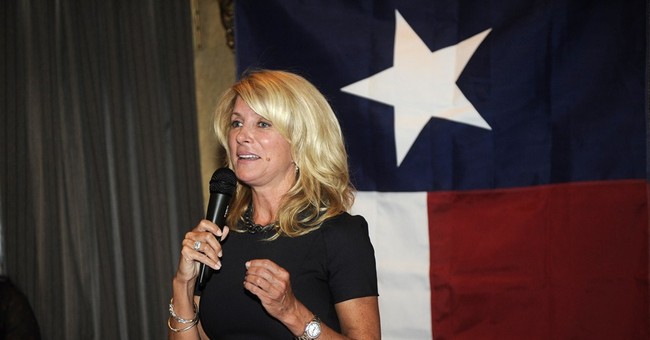 Trending
The governorship of Texas is getting like the governorship of New York and California: a venue for spotting political trends and up-and-coming national leaders. Which helps explain all the media oooh-la-la-ing over Wendy Davis' bid to become the next Rick Perry -- colored blue instead of red.

Could Texas, under the witching spell of a future Davis administration, turn from gun-toting, business-loving, Bible-quoting conservatism to cuddly, hand-in-someone-else's-pocket liberalism?

Well, since you ask -- no. First, It would take a real -- not just a suppositious -- Gov. Davis to initiate, far less effect, such a notable change. I'm afraid, boys, that ain't going to happen this go-round. State Sen. Davis, who filibustered her way into liberal media hearts everywhere, trying to block an abortion bill she pronounced too stringent, enjoys slightly better odds of winning the governorship of Texas than might be accorded an armadillo lumbering across an interstate highway during rush hour.

Either Atty. Gen. Greg Abbott or former Texas Workforce Commission Chairman Tom Pauken -- both are vying for the Republican gubernatorial nomination -- will beat Sen. Davis with minimal trouble. She's a liberal in a conservative state, identified -- thanks to the filibuster that made her a candidate -- with the cause of keeping abortion restrictions as loose as possible.

Running for the right to run Colorado or Missouri or Rhode Island, Sen. Davis would find the odds against her far less burdensome. Naturally in any such race, she would face strong competition from the numerous Democrats already implanted there. In Texas -- not so much. No other Texas Democrat -- new style, as distinguished from Democrats of the old Preston Smith-John Connally order, 40 to 50 years ago -- appears to covet the job or the effort to obtain it, anyway.

Not even Texas' stultifying liberal press corps appears to give Davis much of a chance -- preferring to talk of the coming of the kingdom, when white conservatives (the rascals, the rednecks!) find themselves outnumbered by angry black and Hispanic Democrats. While we wait to see how that plays out, we might consider some of the reasons Sen. Davis is setting herself up for political vacation time.

The largest of those reasons is the state's independent streak -- a trait as old as Texas. Texans do not, by and large, take to being instructed as to their obligations to The Larger Good. They prefer figuring out those obligations themselves. They don't disdain governmental help to those in need of it; unlike New Yorkers and Californians, they acknowledge limits -- moral as well as economic -- to a state's assigning itself the role of permanent caregiver. Unwilling to play such a role, Texas keeps taxation as low as feasible -- the better to encourage work and investment.

Sen. Davis would surmount these philosophical roadblocks ... how? Through inflicting Texans with higher taxes and stricter regulations? Could she really bring off such a feat in such a state? The lady aims, apparently, to urge bigger and bigger bucks for Texas' just so-so system of public education: without explaining thus far what she intends to buy with such extra cash as the legislature might grant in new taxes.

Liberalism in the early 21st century defines the problems of the world as stemming from too little tax-payer money, as well as from too little caring on the part of stingy, unfeeling taxpayers. Liberals want to shake the public money tree, on which they assume cash grows with hardly any help from those who labor with minds and hands.

In the Age of Obama, talk of redistributing wealth -- from selected haves to collective have-nots -- is everywhere. Not at least on account of Obamacare, a redistribution scheme as subtly complex and generous-sounding as any, short of the guillotine. Into this feverish milieu comes Wendy Davis, with more ambition than understanding of the processes by which freedom generates work, and work generates prosperity.

The lady is no dummy, having risen from trailer park to this, her present eminence. The political vacation for which she has set herself up may improve her thinking, and her prospects, for the future.