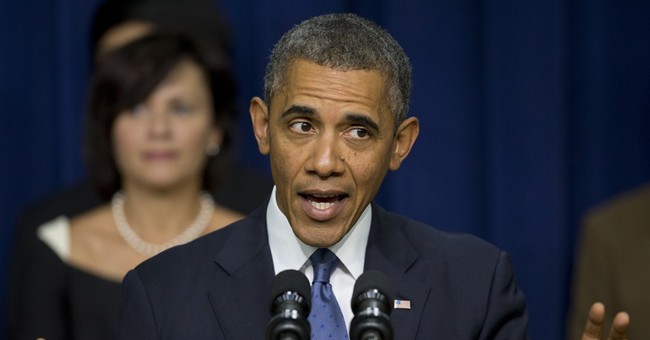 Trending
Fresh from terrorizing the Russians and bringing everlasting peace to a war-torn Middle East, Barack Obama undertook Monday to work on the Republicans the same tactics that worked so resoundingly on the trembling Vladimir Putin. He made a speech.

Obama makes a lot of speeches because he has a lot to say on all topics. The one he made in the Rose Garden, touting his impending triumph over the country's economic woes, had all the right props, from impressive background to worshipful audience. The language was robust: "Republicans in Congress don't seem to be focused on how to grow the economy and build the middle class. I say 'at the moment' because I'm still hoping that a light bulb goes off here."

I cannot remember a time when one faction of one party promises economic chaos if it can't get 100 percent of what it wants.

(A)re some of these folks really so beholden to one extreme wing of their party they're willing to tank the entire economy just because they can't get their way on this issue?

What they call this in the boxing ring and other such high-class venues is trash-talkin'. You try to make your opponent lose his cool, get mad, throw a premature punch. C'mon, man! You think you're such a big man! Well, where I come from, we got a name for folks like you.

He's such a class act, Barack Obama! So much personal dignity! A week ago, getting ready to bomb the Syrians (or so he said), the president was wondering how many Republicans he could round up to compensate for all the left-wing Democrats he couldn't hold in line.

That was of course last week. Bailed out of a serious foreign policy jam by his old friend Vladimir Putin, who handed him the formula for calling off the pro-bombing movement, Obama decided he didn't need the Republicans after all Therefore he could attack them with his patented blend of patronizing language and sarcasm. (As I said, a genuine class act!)

While the Syrians, with Russian help, take care of crushing the Syrian rebellion -- in which 100,000 Syrians have lost their lives, just 1 percent of them due to chemical warfare -- our president can revert to taking bows for dealing with an economy still awaiting recovery despite his past ministrations.

What's really lovable about our president is his gift, no doubt divine in origin, for never putting a foot wrong, never making a mistake -- at least by his own account. Fifty-three percent of Americans, according to a new Pew Research poll, disapprove of Obamacare, yet in two weeks, it's "going to help" even more millions than it has already. And, oh, that sequester -- which he proposed, agreed to and signed into law!

"It's irresponsible to keep it in place." And we "need to grow faster" but can't because "the top 1 percent of Americans took home 20 percent of the nation's income last year" in this "winner-take-all economy where a few do better and better while everybody else just treads water or loses ground."

Three more years -- it hurts to say this -- is the period for which the United States is stuck with a non-serious president. Serious national leaders try to get things done, stretching out a hand to possible allies, standing firm where necessary, giving ground otherwise. If Barack Obama is a serious national leader, Miley Cyrus is an Amish housewife.

What a shame Obama trusts Putin and Bashar al-Assad twice as much as he trusts the average Republican member of Congress. With Obama, the point, perhaps, is that he has Putin and Assad out of the way momentarily. Not so the Republican House he faces, with its tea party constituency, as time draws near to deal with the budget and the debt ceiling.

The Rose Garden speech, to be sure, contained one high-minded exhortation: "Let's stop the political posturing." That was just before the Republican-bashing commenced anew.