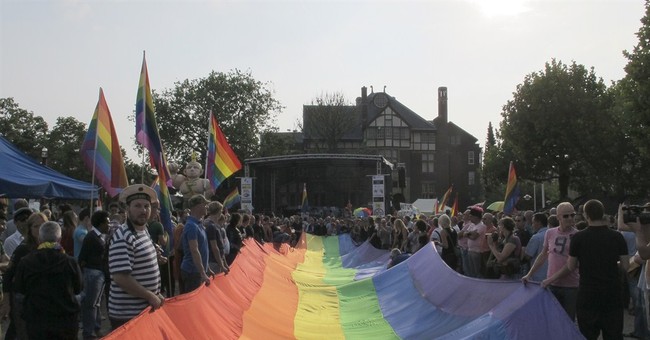 A news story out of New Mexico reminds us how hard it has lately become to be an American: a traditional American, I should say, concerned with trivial stuff like conscience and faith and personal integrity.

New Mexico's Supreme Court last week declared a mom and pop business, called Elane Photography, had violated the state human rights act by declining to photograph a lesbian commitment ceremony seven years ago. Why did the owners decline? On account of their belief in the ancient norm of heterosexual marriage.

Never mind, said the court: "To allow discrimination based on conduct so closely correlated with sexual orientation would severely undermine the purpose" of the human rights act, which disallows refusal of a public service on account of "race, religion, color, national origin, ancestry, sex, sexual orientation, gender identity, spousal affiliation or physical or mental handicap."

As it happens, Jonathan and Elaine Huguenin, owners of the photo shop, don't believe in gay marriage; they didn't jump for joy at the idea of putting their professional stamp on memories of an occasion not far removed from that ever-trendier cause. So now they're outcasts of a sort: offenders against the social conscience of the state of New Mexico. It's their tough luck to affirm an institutional understanding as old as the human race. We've moved on, it seems. According to whom? According, for now, to New Mexico's Supreme Court, unless a federal court should intervene on First Amendment grounds.

To disentangle the cause of gay rights from the cause of civil rights used to be easy; that ceased a while back. As the gay rights cause gains stature and success, its exponents move to require not just tolerance but public support of it. In concurring with his judicial brethren as to the Huguenins' culpability, Justice Richard Bosson drove all the way to the one-yard line with an argument for forced conformity, saying that in the world of commerce, "the Huguenins have to channel their conduct, not their beliefs, so as to leave space for other Americans who believe something different."

Now we see, don't we? Difference of belief is for "others," not for those who famously cling to God and guns. What's wrong with these people? Don't they see "(t)hat compromise is part of the glue that holds us together as a nation, the tolerance that lubricates the varied moving parts of us as a people"? Justice Bosson laid floral offerings upon what he called "(t)hat sense of respect we owe others, whether or not we believe as they do." To the Huguenins, he said in effect, come on, get with the program, pay "the price of citizenship."

The matter before the New Mexico court is in one sense about "gay rights." It is in a larger and darker sense about freedom -- freedom of the sort Americans at the founding of the republic thought they were enshrining forever.

The loud squeak-squawk you hear from the general direction of New Mexico is the cell door closing on the right not just to believe -- as do the Huguenins -- but to (ital)act(ital) on your beliefs, to put money wherever mouths may be.

The argument transposes to other contemporary spheres: For instance, to the argument over whether, under Obamacare, Americans opposed to birth control enjoy the right not to subsidize its provision under an insurance program Suits are stacking up in federal court over this very point.

Our overwhelmingly liberal media would have us believe that only ... let's call them non-liberals favor the curtailment of others' right to act on internal beliefs. Experience shows us otherwise. To dissent from enforcement of the new equality principle -- everybody equal except those suspected of voting for Mitt Romney -- is to fall out with our new moral leaders. You know -- the ones fond of shouting, "Liberty," meaning it for themselves alone.