The Second Coming of Ann Richards 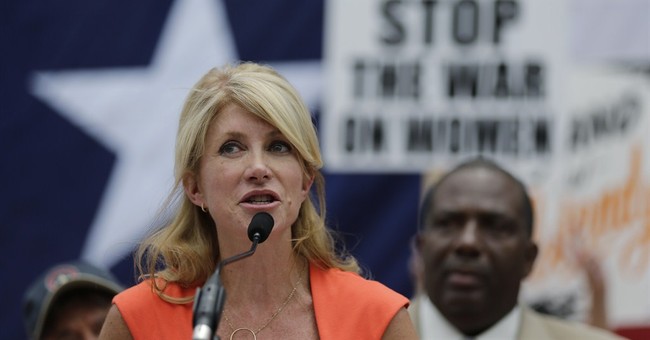 Gone is Ann Richards, the late, leathery, white-haired feminist champion whose life was celebrated in a Broadway play -- "Ann," starring Holland Taylor. The play is closing prematurely since there is insufficient demand for white-haired feminist champions. Never mind that for now. We've got a second Ann, it would appear. She is a fellow Texan, to boot: State Sen. Wendy Davis, who just talked to death a bill meant to tighten abortion restrictions.

The betting around the nation has been that Wendy Davis was sure looking like a prospective governor, if not, according to some of the more excited acolytes, a president of the United States.

Oh, the lengths to which the abortion debate, 40 years old now, still drives us!

The set-to between Davis and pro-life Governor Rick Perry has proven especially engaging. Perry backed the bill, which would have forbidden abortions after 20 weeks of pregnancy and required abortion clinics the same sanitary and clinical standards that apply to conventional surgical centers.

Well! Sen. Davis wasn't having any of that. She laced up her pink sneakers and began to talk. Free speech fans in the Senate balcony shouted so loudly they drowned out the proceedings as adjournment time approached. The bill died. Perry called a special session -- at taxpayer expense -- to clean up the mess that fidelity to the Ann Richards canon had left lying around the Capitol. He took time to note that Sen. Davis seemed willing to "say that children born into the worst of circumstances" -- women like herself, the daughter of a single mother -- "can't grow to live successful lives." The implication: It's morally OK just to let such children slide away into oblivion, unborn, untested.

Who's ahead then? That's the question after the emotional comments, the sanguine predictions of glory and Ann-hood for Davis, have faded.

Looks as if there won't be a head-to-head matchup, Perry having announced this week his intention not to seek the governorship again. Davis for her part could be forgiven for needing time to rearrange on her shoulders the Richards mantel laid thereupon.

The political reality is that in a 2016 Perry-Davis match-up, the governor would have beaten the senator all hollow. It would have been a treat to watch them put their differing premises on the table for all to see. For this reason alone -- certainly not for the reason that Wendy Davis could, theoretically, have won the governorship -- there is reason to regret the impossibility of such a race.

The Davis position in a nutshell: The choice to end most pregnancies (save very late ones, I imagine she would add) is the mother's, and the mother's alone. The Davis position is mainstream, of course, in feminist circles, where no challenge to maternal privilege can be admitted, never mind the effect on child who would otherwise have come forth.

The Perry position, in a nutshell: Life trumps competing considerations, such as convenience or desire. That's to say, look, people, it's a real-live human being, not just some mass of "tissues," whose existence or non-existence is at stake. Some basic care, enforced by the state, seems indicated. Or, if not, why not?

I've never laid eyes on Sen. Davis. The fact is, her biography impresses. As Manny Fernandez recounts it in The New York Times, "She was a teenager when her first child was born but managed as a single mother to pull herself from a trailer park to Harvard Law School to a hard-fought seat in the Texas Senate, a rare liberal representing conservative Tarrant County."

This is of no consequence in the matter of appraising abortion's moral and practical consequences? It would be, ah, provocative to hear her say why, when challenged by Gov. Rick Perry or his like. We all could learn something from such an engagement. Maybe we yet will. The Richards set wants her for president. Perry himself is known to have yearned for the office. Interesting.