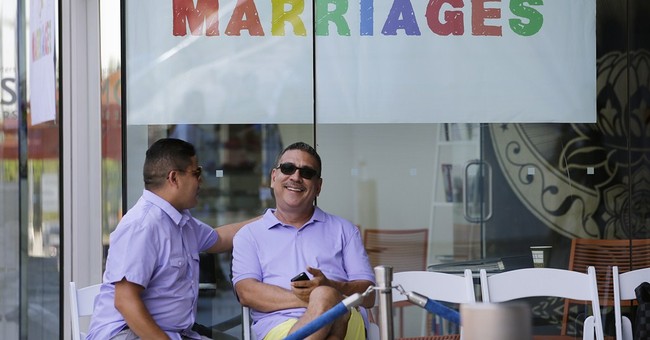 Whoever would rend his garments over the Supreme Court's gay marriage decisions is certainly welcome to do so, but I wouldn't advise spending undue time and emotion on such an enterprise. Rarely does a democratic government, in its embrace of some daring new notion, truly outrun the voting public. A little, sometimes, just not wildly, outrageously so.

This is to say America's, not to mention the Western world's, astounding embrace of gay rights is the main element in the two marriage cases decided last week. That our highest court would have given a big, ripe Bronx cheer to a society wedded overwhelmingly to the historic concept of marriage as ordained solely for a man and woman only -- I think not.

I think the justices looked around. I think they read the newspapers and the Internet and watched TV. They discerned astoundingly, unaccountably fast movement on the public's part concerning homosexuality. They may have overestimated what journalists call a "sea change" in public attitudes. Still, they may have noted a Pew Research poll in March 2009, declaring, "Most (i.e., 56 percent) Mainline Protestants Say Society Should Accept Homosexuality." That, together with a Pew poll last spring, claiming fully half of Americans favor gay marriage. The learned justices saw state legislature after state legislature making the same determination this very year. Agitation in the media and the entertainment industry, in behalf of extending "equality" to gays and lesbians, has been ceaseless. On some days, half The New York Times, our national "newspaper of record," seems wholly given over to the enterprise.

Very, very clearly, a considerable portion of 21st-century America was primed and ready for that which five justices out of nine proclaimed last week as the new revealed Truth about marriage. On the evidence of polls, the same figure -- five out of nine -- could be taken as approximating the division of sentiment around the country. Who did this thing? "We the people," in the deepest, most democratic sense, may have done it.

And that's the end of it? Not quite. Putting the monkey on the public's back, in terms of destroying the ancient moral consensus as to the necessity of heterosexual marriage, suggests what must be done in response. Not with any early prospect of success -- no such prospect exists in the "Modern Family" society. Not with petitions or rallies or proposals for legislative action, because petitions and rallies and proposals for legislative action are inadequate to the main task at hand, which is the task of changing minds.

Changing minds to -- what? Reality, most of all. The human reality is that of two sexes, formed for each other, nurtured by each other, cooperating, creatively and lovingly, in the great project of moving life forward, generation by generation. The gay union awkwardly plays at imitating what the heterosexual marriage brings off naturally, almost without effort. The gay union, whatever forms of sexual relationship enter into it, is friendship rather than marriage.

A New York Times (of course!) story about gay weddings in California quoted a male Army reservist who was marrying his partner of 10 years. "I can sleep easier now," said Captain Potoczniak, "'because I know that if anything happens to me anywhere in the world, he is my husband now." "Husband"? Meaning Potoczniak is the "wife"? Uh -- no. He's not. There is no "marriage" here. We are reading about friends whose friendship, for reinforcement purposes, doesn't require the warping of society's fundamental institution.

The work of restoring the normal understanding of marriage -- the understanding that "Mr. and Mr." Potoczniak can't get their arms around (and don't care to) -- is work nobody could have imagined, even 10 years ago. Nor is there any early prospect of success. It can't be helped. The view that two men or two women, however honorable, however delightful to talk to, may "marry" -- such a view enthrones the view that all preferences are equal, that nothing is intrinsically right, that no heavenly authority binds humanity. Ninety-nine percent of Americans could believe such stuff, and it still wouldn't be true.