Of Sexual Assault and the Price of Cultural Decay 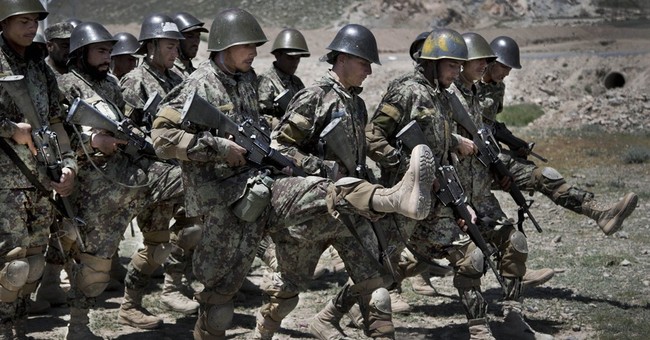 Naturally, President Obama had plenty to say, lecturing Pentagon leaders on the matter: a crime made worse by making the military "less effective than it can be."

The elements of the matter have been all over the news: Ironically enough, in the weeks leading up to Memorial Day, when ancient convention calls for Americans to celebrate, rather than deplore, their warriors. Of whom, yes, a distinct minority are at the center of the scandal.

The look of the whole thing, even so, is awful, and not necessarily for the reasons adduced by Hagel and the rest: Namely, the undermining, within the military, of that "culture and respect and dignity" the military owes its members.

How did we get to where we are? We got here, I hate to inform the secretary and the speaker and the president, by pretending a non-existent equivalence between men and women. In other words, as the feminist movement sees it, ain't no reason a woman can't do exactly -- exactly, buster -- what a man can do in what we used to call a man's world.

The idea of pretending male and female personnel are the same in military terms and deserve the same status is the loopiest idea of our loopiest century, the 20th. The military profession, I am sorry to inform our scandalized officials, is a male profession. It has always been so. There are no precedents for thinking otherwise.

The military ought to have been kept all-male. It won't -- alas -- get past present dilemmas like sexual assaults, and the nefarious idea of incorporating mothers and sisters into combat, until it becomes all-male once more. Whenever that may be: probably no time soon. Alas, again.

I mean, look, you start with a warrior culture, the military culture, geared to the achievement of deflecting or hurling back your country's enemies. This is not the Wednesday Morning Poetry Society we are talking about. It is a society, rather, that specializes in force and violence for the sound reason that force and violence are required for military success.

Here, then, come the professional feminists. Professional feminism says we want doors to spring open miraculously to every job in the world. No exceptions. Watch your back, Pope Francis! Feminism says to nutty males who see the killing enterprise as a male preserve, shut up, Jack! The sisters need a piece of the action.

Sexual assault is what happens when you mix men and women in the same pot, then season it -- here's the underlying point -- with the cultural nonsense of the past 50 years; all the rubbish spoken by men and women alike, and approved by our intellectual/activist caste, about the necessity of ditching moral guidelines and guardrails, letting people operate pretty much the way they want to.

Ideas have consequences, ladies and gentlemen of the political establishment. Pour into the intellectual pipeline a lot of nonsense about the oppressiveness of moral codes, and what comes out at the end of the pipeline is ... ta-da! -- 26,000 sexual assaults in the military, made easier, made more logical, by the complaisance of our post-1965 culture in the demise of standards and restraints of all kinds.

What you sow, you reap. Naw, that's mean. Fifty years ago, we didn't know we were buying in for 26,000 sexual assaults. Did we gang? All we saw ahead was self-fulfillment, along with liberation from dead people's ideas.

Turns out we should have listened a little more carefully to those dead folks.