The Education of Barack Obama 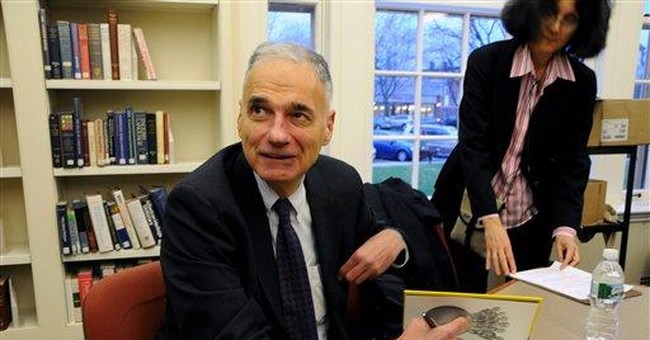 When Ralph Nader wants to impeach a liberal African-American president for war crimes, you start to get the idea how odd these present times are. Odd and getting odder. Nor is it likely, in spite of the wall of comments concerning our Libyan intervention, that anyone can grasp the meaning.

There seems one likelihood to suggest. It is that this won't be the last intervention. We live in that kind of world.

Which is what kind of world, exactly? The kind we know from the history books -- in which, rather than sort out their varied grievances like gentlemen, the non-gentlemen usually in charge of public affairs will bloody each other's and other's noses. It has always been thus. The 192 disunited nations that belong to the United Nations don't get along and never have.

Now that we've stuck out our necks for the Libyan rebels, we surely owe it to other war-torn peoples to consider their cases solemnly and possibly to act with whatever resources we may still have. We can expect calls that escalate into tearful demands. It is what happens when you make other people's business your own business.

At a press conference in Chile on Monday, President Obama attempted an explanation for his decision to bomb Libya in collaboration with the British and French. "The core principle" he wishes to uphold is that in "a potential humanitarian crisis" -- "about to take place," he added redundantly -- "we can't simply stand by with empty words." We have to "take some sort of action." Some sort.

He couldn't resist a sideways lunge at the Bush administration. On occasion, he said the United States has acted "unilaterally," or without "full international support," whatever "full" and "international" and "support" might mean. This time, we have the British, the French, and even the Belgians, to whom maybe (assuming something horrible doesn't happen) we can turn over the whole mission (assuming they agree to take it on).

It sounds very much like a plan to come up with a plan -- one that may or may not leave the Libyans better off than they were a month ago. But you try, while waiting for the next invitation to go forth and rescue others who, having watched this present mission, can think of no reason you shouldn't help them, too.

Obama, winner of the Nobel Prize for Whatever -- Peace, supposedly, but now we see where that got the world -- has had a rude introduction to the ways of nations. You don't "reset" human relations by pushing by a button; least of all, by giving a speech. Thanks to the general nuttiness of the human race, a president has to take what precautions he can against the malignancy of those who like neither Americans nor American ideals. The president keeps the armed forces armed and forceful and tries to remember that an enemy isn't just someone you have failed to charm; he is apt to be someone hoping you go out of business. Permanently.

Another thing a wide-awake president does is shrug off the counsel of the obvious nut cases -- Nader, for instance, and the congressional leftists who, to judge from their rhetoric, would wait for an armed intruder to kick in their front door before threatening to swat him with a rolled-up newspaper sports section.

Which isn't to say Obama, with respect to Libya, has done well or poorly. We'll find out as we go along. More to the point, he has made a hard, stark choice -- the kind of choice presidents in a fallen, wacko world must make all the time, for better or worse, richer or poorer, no matter what nonsense you gurgle on the campaign trail about hope and change.

Only the Lord of Battles knows how this Libyan tiff will turn out, but the education of Barack Obama -- the ongoing education, be it said -- isn't the worst kind of prologue.