On 'Demonizing' the Government 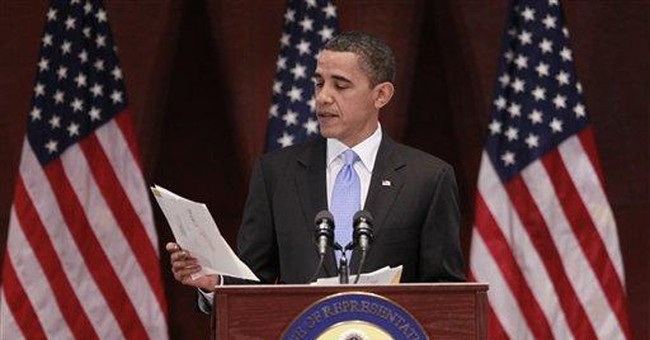 By the weekend, Bill Clinton and Rush Limbaugh were going after each other with bung starters and busted beer bottles. Did anti-government rhetoric contribute to the Oklahoma City bombing of April 1995, which killed 168? Yes! No! Guess which party to the discussion said which.

Marking the 15th anniversary of the Timothy McVeigh outrage, Clinton purports to be trying to assuage some of the anger we aren't even supposed to be having under a presidential administration devoted, supposedly, to bipartisanship and the promotion of good feeling after those rocky Bush years.

There's "a big difference," Clinton went on to write in The New York Times, following his Limbaugh dust-up, "between criticizing a policy or a politician and demonizing the government that guarantees our freedoms and the public servants who enforce our laws." Further, "we must all assume responsibility for our words and actions (SET ITAL) before (END ITAL) they enter a vast echo chamber and reach those both serious and delirious, connected and unhinged."

And speaking of "responsibility." A new poll by the nonpartisan Pew Research Center throws new light on the question of what's-all-the-anger-about? In The Wall Street Journal, Pew Research Center president Andrew Kohut notes a national mood edgy and fractious, in the context of "a dismal economy, an unhappy public, and epic discount with Congress and elected officials." Thirty percent of Americans, it seems, "view the federal government as a major threat to their personal freedoms."

How come? What goes on here anyway, behind the oratorical battle smoke? A whole lot more goes on than one might surmise from tuning in to the Rush and Bill Show.

A cardinal principle of democracy is, don't do things to demos -- the people -- against demos' own ideas, notions and viewpoints. For instance, take over the health care system.

At the time of the final Senate and House votes on health care, polls indicated majority opposition to the bill, not the least reason being, apparently, that hardly anyone understood what the bill contained and proposed. Polls continue to show large majorities in favor of repeal.

No matter. The White House said we needed the bill. We'd get used to once it became law and went into effect. Minnesota's Republican congresswoman, Michele Bachmann, may recently have offended Clinton by her inelegant characterization of the present Democratic government as "a gangster government." But she captured a widespread perception of mob-like disdain for the customers.

If Democrats hope to tamp down the anger Clinton perceives in public discourse, they have an odd strategy -- that of enlarging government, and government costs, and government regulation, rather than diminishing those factors in the lives of the people.

There's a geometric/mathematical dimension to this business. The heftier government grows, the more people it affects and touches; the more such people who feel the touch of government, the larger the chances grow for offense and resentment and anger.

A government the size of Calvin Coolidge's, or even Dwight Eisenhower's -- you couldn't get unduly furious over its pastimes. There weren't enough pastimes. The government let you alone, comparatively speaking. A government -- ours, say -- about to start sopping up in taxes a quarter of the national wealth, yet unable to figure out how to pay for all its programs, is a government that it's all but compulsory to dislike.

The point escapes most in the White House and in the Democratic leadership. They want a bigger government still -- one that decides what kind of energy we use, and what size autos we drive, and what kinds of loans banks can make, and what kinds of medical services best fulfill public needs. All this with nearly 10 percent of American workers still unemployed.

Democrats, like the former president, suppose a kind of nuttiness out there in the country, seething and boiling and about to cause major trouble. They overlook the nuttiness that in too many cases precedes the first kind: the nuttiness of trying to cram things down voters' throats and expecting in return smiles, back pats and high fives.