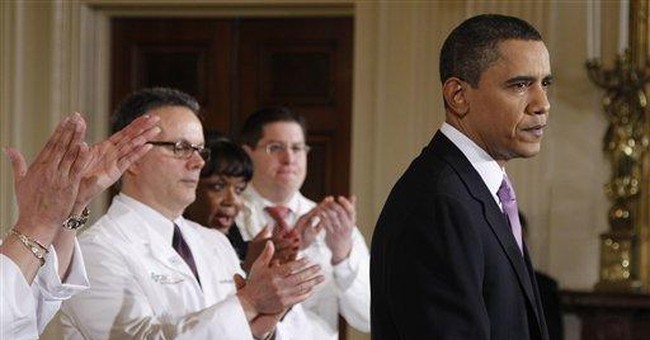 According to John Harwood in The New York Times, public support for "reining in Wall Street" has Democrats about as exuberant as Democrats ever get any more. Scared Senate Republicans are looking for deals to cut. The public wants this thing, with three-fifths supporting it in a recent poll. Democrats -- who always do the public's bidding -- are ready to close the deal.

If there's time, that is, after Congress and the president force the public to take a deal on health care that only a distinct minority seems to want.

What the average Democrat thinks of public opinion these days seems to depend on which big government measure is on the table.

Financial regulation? Can't let it die -- the public wouldn't forgive! Health -- um, well, you know, people will love this thing once it gets done, never mind what they say now.

In other words, never mind that in the latest Rasmussen poll 44 percent want Obamacare and 52 percent don't. Gallup situates the division at 42 percent favorable, 49 against. An ABC News/Washington Post poll gives the Pelosi and Reid bills their closest (if still losing) margin -- 46 for, 49 against. Says Karlyn Bowman of the American Enterprise Institute: "I can't think of any other big piece of legislation that had so much opposition" before passing.

Somehow, in the counsels of the Democratic Party, none of this seems to matter. Open your mouths, folks; watch the spoon; take a big swallow and you'll love it.

Accusing a politician of hypocrisy is akin to blaming a size-five shoe for pinching a size-10 foot. A considerably more useful reaction is caution. Maybe the polls on health care -- as Democrats insist -- show little more than a foul public mood on this particular issue. Very well. When the public has such a mood, what is the right political approach -- to say, "Shut up, you jerks," or to draw back for further consideration and the annealing of large aggravations and anxieties? The former, snaps Madam Speaker Pelosi. Shut up, America! Take your medicine!

The danger in this approach is of course twofold. First, the public could be right: The bill might really be a poorly thought-out and ill-digested one, a candidate for thoughtful improvement.

Second, telling voters -- even the relatively small number who talk to pollsters -- to proceed immediately to the hot place savors of arrogance. Arrogance contrary to democratic theory, be it noted.

No bill should pass solely because polls call it unpopular; nor should one pass solely because polls say the public wants it now. Public opinion, so called, can change in a few instants, as Barack Obama, once the nation's hero, now its main lecturer and finger-wagger, can surely attest. When the bloom is off the rose -- health care is surely an instance of that -- the sensible, as opposed to the frivolous, politician will ask how come and what ought to be done about it.

The need for caution extends to financial regulation, a nebulous term that can mean a million different things to a million different people. Strong support for the whole concept is waning -- down 13 points in a year (according to an ABC News/Washington Post poll), with opposition 12 points higher.

Public disenchantment with Obamanism seems to grow daily. Which shows you what goes on, doesn't it? By golly, if people are going to quit loving the new regime, the regime is going to pop it to those same people while time remains. Rahm Emanuel must have had something of the sort in mind when he delivered his famous epigram about never letting a crisis go to waste. No, sir -- not if mere voters (what do they know anyway?) might change their mind about you. More and more dangerous the Washington power games look every minute.