Who Can Lead The Republicans? 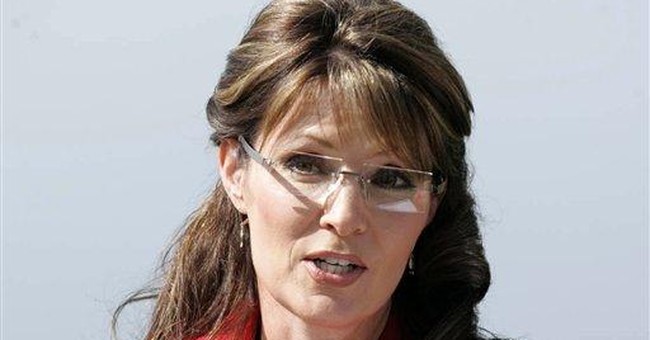 Sarah Palin wants to run for president? Quick -- get the butterfly net. Who in his -- or her -- right mind would want to strut into the economic Hiroshima that the Democratic Congress and White House seem bent on precipitating? What a fine mess!

Someone of course has to come along eventually and clean it all up: someone maybe with a little more experience than a former half-term governor of our most northerly state. At that, the job will be formidable and terrifying, unless the coalition of Frank, Waxman, Pelosi and Franken, with the president at the steering wheel, somehow fails to run the economy off the cliff.

Come to think of it, the whole national government appears out of its mind. There's probably never been such a collection of, shall we say, Gadarene politicians when it comes to economic policy. These people, unless they happen to be suicidal, show no sign of understanding what they're up to. Sarah Palin's touted talent for field-dressing a moose won't get her far when it comes to shoveling out the bits and pieces left from an experiment in turning over the world's greatest economy to politicians and bureaucrats. Which, one is sorry to say, is about what the Democrats are up to, without acknowledging the fact.

Energy, health care, banking, Wall Street, the automobile industry -- the Democrats want to run it, tax it, or, preferably, both. This, during what's usually described as our biggest economic mess since World War II, with Medicare facing economic collapse around the time the Obama girls go to college (if not sooner). Sarah Palin has a lot of personal appeal, but nothing she's yet shown us suggests she has the aptitude for saying boo to Barney Frank, much less for giving him the political workover he deserves.

What do the Republicans do for leadership? Nothing is more unclear right now. John McCain, who didn't exactly clear the way for the Obama-Biden team, but didn't hinder it either, has shown signs of vitality in debate. John Boehner, the House majority leader, gave a terrific performance in fighting the "clean air" bill, which threatens to dirty the whole economy. Then there's Gov. Mark Sanford. Next subject, please.

I am asked all the time who will emerge as the next Reagan. I suspect nobody will. Our Ron was a different kind of man for a different kind of time than this. Both the economy and the Democrats were less problematical. Events and underlying trends hadn't played themselves out to the degree they now have. No one wanted to drive the oil companies out of business. Few wished Washington to lord it over Wall Street. Things certainly aren't like that now.

The Frank-Waxman-Obama policies, rooted as they are in fantasies about the way economies function and human incentives operate, could yet fall short of fulfillment. Already polls show Americans worried about the overdraft charges piling up as Congress writes one hot check after another. Nor are policies founded on government oversight of everything capable of producing and maintaining the prosperity that Americans regard as their entitlement. Either the economy rights itself without taxes rising or a lot of Democratic seats in Congress are going to have Republican occupants in 2011.

The Republican leader who can accurately limn the dangers while inspiring people to go out and meet them is a rare bird who possibly hasn't hatched yet. Though you never can tell. Already he could be readying himself for flight, without anyone's noticing.

Or, yes, she could be. Why not? Margaret Thatcher was the greatest European leader since Adenauer. Love that woman -- her courage, her brains, her fortitude. Fortitude, yes -- the attribute of which Gov. Palin showed so little in walking away from her day job. If there's more to the governor than right now seems the case, well, praise be, and if she's crazy enough to want the post-Obama presidency, fine. The proof's nonetheless in the pudding.