Calling Things By Their Right Names 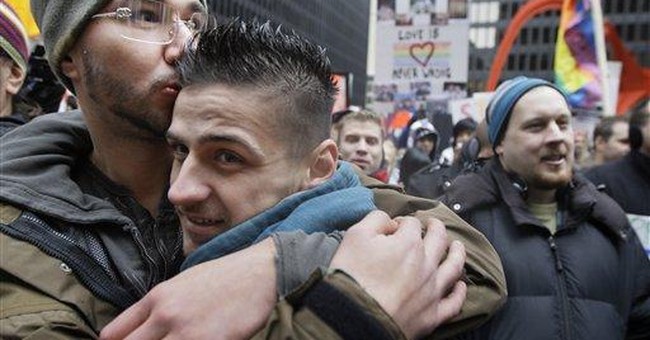 The placard in the photo of a recent rally favoring gay marriage asks, bluntly, "Family. Isn't It About Love?"

Well, hmm. You might indeed incline to such a view. Then, again, you might wish to broaden the perspective, in keeping with normative modes for understanding the foundational human structure we call family.

You'd want to begin with the acknowledgement that where norms exist, there's generally a reason for them: the sounder the reason, the more tenacious and enduring the norm, the more deeply lodged in heart and soul and mind. You need more than a placard to uproot such norms. You need compelling reasons.

The voters of California, Florida and Arizona on Nov. 4 saw no such reasons. They enacted formal bans on so-called gay marriage. Thus, the scattered if occasionally sizable protests of a few days ago. The protesters don't like the old marriage norms -- one man, one woman. They want new norms, insisting on love as the only thing that matters.

The protesters use the language of civil rights. To quote the chant at a rally last weekend in Washington, D.C.: "Gay, straight, black, white; marriage is a civil right."

No, it's not -- not in the sense that desire equals lawful claim, binding on the whole community. To make such a claim is to argue for the dissolving of whatever underlies our life together, and for its replacement with any flickering want or wish.

One reason society guards traditional marriage with a certain jealous care is that marriage orders and regularizes the basic condition of life, namely, the male-female relationship. Society sets boundaries around marriage, establishes rules and rights, lets the parties know what they may expect, and what is expected of them in turn.

A second reason: Family is future. A mother, meaning a woman, and a father, meaning a man, bring life into the world. There's no other way to do it. Even in Dr. Frankenstein's experiments, a human body was the starting point.

The language of the gay marriage protesters is deliberately subversive. All they want, supposedly, is a crack in the legal door wide enough to admit partners of the same sex. That would be "marriage"? Not at all. It would be something wholly new in human experience, with consequences beyond imagining. You might as well call a lamppost a bottle of chardonnay as call the union of two gay people a marriage, howsoever kindly the two parties involved, howsoever generous and public-spirited. It's not about them; it's about us all.

Words like "honor" and "truth" -- yes, and "marriage" -- aren't just combinations of vowels and consonants. They have lives of their own. They point to how a thing is, not in opinion merely, but in reality. The joy of renaming a thing, of course, is that of reinventing it, substituting a wholly new "reality."

A non-normative marriage, once allowed, undermines the normative kind just by inference. If the norm no longer is the lifelong union of a man and a woman, we may count on the imaginative faculties of those most concerned to come up with new understandings. I don't think the proponents of gay marriage have in mind the extension of the matter to polygamy, but when you think it over, why not? It's what some people want. Shouldn't they have what they want? To deny a 21st century American his wishes (unless he's some Christian rightist or other) would be cruel and hateful.

It's some century all right: great in various particulars, awful in others, such as those touching on the care and conservation of the great truths that once joined all men and women, mind linking with mind, generation with generation. The other side of it is, Californians, when challenged on the point, knew what to do, and so did Floridians and Arizonans. As the Unsinkable Molly Brown would have it, we ain't down yet.