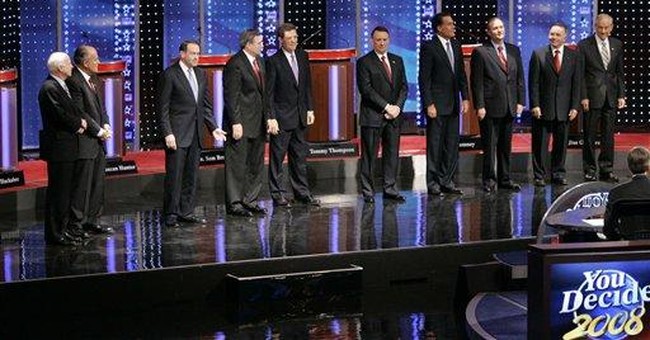 I've just now figured it out -- the right conservative candidate for these confused and disturbing times. I'm voting for Barry Goldwater, and nothing can stop me. Save -- I admit -- the inconvenience of Barry's residence in a venue other than the land of the living.

Still, I want to suggest to perplexed conservatives sorting through the credentials of Romney-Huckabee-Giuliani-Thompson-Paul-McCain that no one matches in substance and appeal the man who, in our hearts, we knew to be right: Barry himself. I want to suggest this not by way of whomping up some sentimental pilgrimage back to ye olden tyme. I suggest Barry as a model for the principled conservatism so many seem to seek vainly and despondently. Those Republicans, for instance, who can't figure out what the Republican message is or should be.

"The Republican Party," asserts Rich Lowry of National Review, "has run out of intellectual steam and good ideas." That's a preposterous state of affairs. Good ideas, as opposed to useful legislative enactments, never decline in potency.

Our guy Barry knew as much. Our guy -- whom Lyndon Johnson imagined he had disposed of in '64, only to find Barry's ideas taking up more and more space in politics -- knew clearly enough what he was about. Freedom was what he was about -- "the maximum amount of freedom for individuals that is consistent with the maintenance of social order."

That's from p. 13 of "The Conscience of a Conservative," which was the Goldwater movement's philosophical charter. Barry didn't write the book himself. He did something better: He thought it through. He concluded that the challenge for conservatives was "to preserve and extend freedom." He wanted not to expand government but to shrink it. He yearned to hear a presidential candidate say, "I have little interest in streamlining government or in making it more efficient, for I mean to reduce its size. My aim is not to pass laws, but to repeal them. It is not to inaugurate new programs, but to cancel old ones that do violence to the Constitution, or that have failed in their purpose, or that impose on the people an unwarranted financial burden."

Wow! So even young Hillary Rodham must have exclaimed while working as a Goldwater Girl in the '64 campaign -- the best thing Mrs. C. ever did, unless she should do a better one by renouncing politics.

How were we going to maximize freedom, Goldwater-style? For one thing, we were going to "make war on all monopolies whether corporate or union." We were going to reduce taxes and spending and wise up the citizen-taxpayer who may have "lost confidence in his claim to his money." Instead of throwing money at education, we were going to "raise standards" and brand "federal intervention in education" as unconstitutional. We were going to maintain not only our military strength but also our resolve to use that strength as the occasion demanded, given that we were "in clear and imminent danger of being overwhelmed by alien forces." (A multi-purpose depiction, that "alien forces" business, even in the post-Soviet era.)

The modern conservative can blow a little dust off "The Conscience of a Conservative" -- e.g., the federal government now effectively rules and runs the public schools -- while discerning the book's golden thread, which is ordered freedom. Who's ever had a better idea? Not even Ronald Reagan (who made his political mark in a nationally televised speech vainly boosting the Goldwater ticket).

The Goldwater program, shouted down in '64, isn't the point. The point is the ideas behind the program, starting with the notion -- which Jefferson and Madison would have endorsed -- that government is the means to particular ends, not the end-in-itself, as too many modern presidential candidates seem to imagine.

The straight-on quest for freedom why wouldn't that resonate far more powerfully than some laundry list of promises and proposals aimed at General Uplift? And what's stopping the present generation of would-be conservative champions from bearing down on that essential point? Don't they care? Because if they do, you can't necessarily tell from watching.