And So We Give Thanks 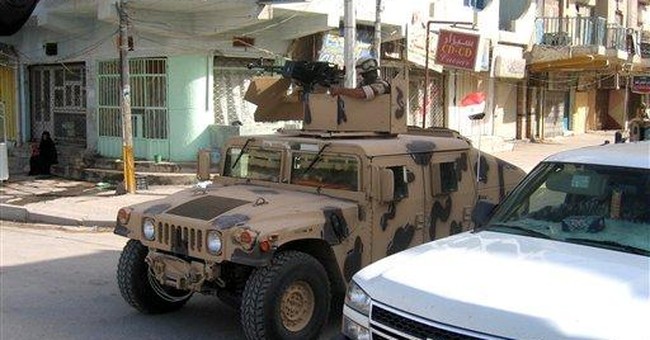 So what's to be thankful for this year? A few, things at least.

1. A kind of peace. Not peace itself, of course. That awaits the end of fighting all over the world, not just in bleeding, bomb-torn Iraq but also in the smaller places about which the media inform you only intermittently -- Darfur, Afghanistan, Gaza, Lebanon and the like. Peace on Earth -- the ideal -- appears always to await circumstances humans seem incapable of affecting.

Still, from the American perspective -- the one that rightly matters most to Americans -- the closing weeks of the year show notable progress in Iraq. Not least because, instead of ordering full-fledged flight from the battlefield, as demanded by the leadership of the Democratic Party, the administration and the military regrouped and refocused.

The much-maligned -- by Democrats -- "surge," without bringing peace, which it wasn't designed to do anyway, is cleansing various villages, rural areas and urban districts of the Islamic terrorist pestilence that seems hardly to concern some Westerners.

The number of suicide bombings has declined precipitously since midyear, even as the number of American casualties has, as predicted by the military, risen. Meanwhile, the protective measures in force since 9/11 must be doing some good. No more attacks of any kind have occurred here.

2. Courage. Read -- I hate to say this -- the death notices of American troops in Iraq, two or three or four of them on some days. Your newspaper publishes these notices regularly. Note the ages of the dead: 20, 21, 22. Does anyone not think it's awful to lose such soldiers?

The point really is larger. It is that these men and women enlisted not before but long after the carnage in Iraq came to dominate news coverage. These soldiers knew they weren't walking into a rock concert. They walked in anyway. Why? One primary reason has to be the persistence, in extraordinary degree, of courage and fortitude in our midst, and of the sense that there exist realities as well as ideals worthy of sacrifice.

Nor is the courage of which I speak the exclusive property of frontline troops. The families of the troops who stick their necks out in battle are warriors of a different sort and mettle. Theirs is not to reason why a parent or spouse hazards everything on behalf of people who wouldn't know Brad Pitt from Tony Romo, yet whose interests the U.S. government has judged parallel to our own. Off our troops go to fight, and back to their homes go the families -- to wait and to pray. Who said there's no courage without a rifle to point at someone?

3. Freedom. Freedom of the highest order ever conceived politically. In a curious way, the rancor and rudeness of modern politics trace their origins to the documents and laws and social changes that privilege freedom above all attempts to regulate its course. We could yet get in real trouble as a society because of the cockiness and belligerence that seem to go with freedom conceived as I'll-do-as-I-please-blast-your-hide.

At the same time, a corollary kind of freedom flourishes here -- namely, the freedom to argue the advocates of the do-as-I-please school into agreement that freedom, unwisely used, collapses into tyranny. Freedom, it might be fair to say, doesn't require wisdom in order to exist; it requires wisdom, restraint and common sense in order to work.

4. Reverence. Not all American heads will bow at Thanksgiving tables in signification of a power with some connection to the bounty before them. Not all Americans see God as having any business sticking His nose outside a church or synagogue door: certainly not into "public" affairs! Yet, memories that even a modern, politically correct education can't disrupt call to mind the longstanding connection between God and the many who came here to worship Him, certain He had something in mind for them here. Something like freedom, like courage, like peace of a sort always demanding care and attention? That mightn't be a bad guess on Thanksgiving 2007.