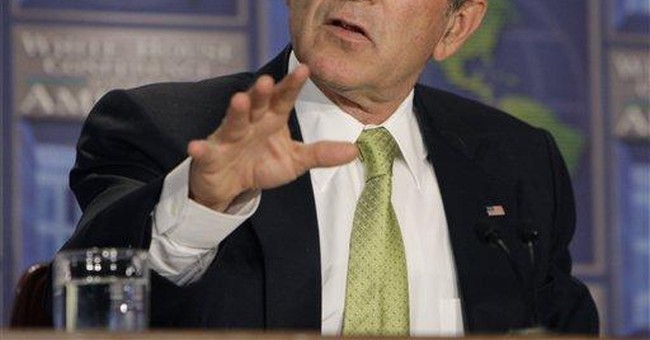 I'm a little confused. Isn't this the same Congress that reduced debate on the immigration bill to competing sets of talking points aimed largely at the appeasement of home constituencies and the deployment of talking points for the 2008 elections? So I seem to remember things.

There wasn't much chance Congress really would move with authority and a sense of direction on immigration, given all the contrasting viewpoints on what to do: round up the illegals, or move them toward stability as a presence in modern life. Democrats threw up roadblocks. Republicans could be seen praying the whole thing would go away. Result: nada .

And isn't this the same Congress that has reduced consideration of Iraq policy to a series of exercises reminiscent of the above; namely, a) blaming George Bush for the whole mess, or b) scurrying from Bush's side just as fast as possible to avoid a share of the blame?

The cold war bipartisanship that obtained as to foreign policy is itself cold. Every time the leader of the Senate's majority Democrats, Harry Reid of Nevada, opens his mouth about Iraq, out pours a torrent of scorn and abuse more likely to inspire al-Qaeda than the 160,000 troops giving the war their last and best shot.

A few days ago, the noted Democratic statesman and Delaware Senator Joe Biden pronounced the president "brain dead." We all have to admire the senator's gift for delicate and constructive expression.

Not -- I'm sure you understand -- that our Congress lacks all taste for combat. Just consider the subpoena war the ruling Democrats are waging with the Bush administration over those federal prosecutor firings. You know, the firings everybody is talking about? You don't? Never mind. Congress is on the job, with the Judiciary Committee's chairman, Democratic Sen. Pat Leahy, talking of criminal charges if the White House doesn't hand over documents relating to the firings that so excite us.

Congresses come and -- fortunately -- go all the time, but the present specimen appears determined to be rated among the worst ever. Triumphalist Democrats seem bound on no higher mission than that of grinding down a president with an unpopular war on his hands. Defeatist Republicans can't figure out a mission so coherent even as that one -- which is why a number of them may not return after the next election. Voters have an odd, and somehow endearing, way of rewarding chiefly those political figures who have at least the glimmer of an idea as to what they want, and can explain it in words of one syllable. Not many congressmen in either party have that gift.

That the road to obstruction isn't the highway to success we figure out from reading recent poll results. According to Gallup, in June, a mere 24 percent of Americans approve of Congress' work. A more generous Newsweek poll puts the figure at 25 percent. A stingier survey for NBC and the Wall Street Journal says it's 23 percent.

A fact too little remarked on is that George W. Bush, with support in the high 20s (and that's pretty bad), outpolls the same people who insist this guy hasn't got a clue and, boy, can we hardly wait to get shut of him. If our president is "brain dead," might Sen. Biden inform us why the voters like him better that way than they like his foes and fair-weather friends?

There isn't much glory out there for anyone right now, from the White House to the doghouse. A point upon which the Democrats might reflect is that -- bad as the Republicans are -- they don't impart to Congress the look of the snake pit: coiled cobras hissing, slithering, striking from the darkness. If the Republicans can't capitalize next year on that image, they'll show themselves dumber even than we think, and who needs more of that?