So What's the Bad Word Today? 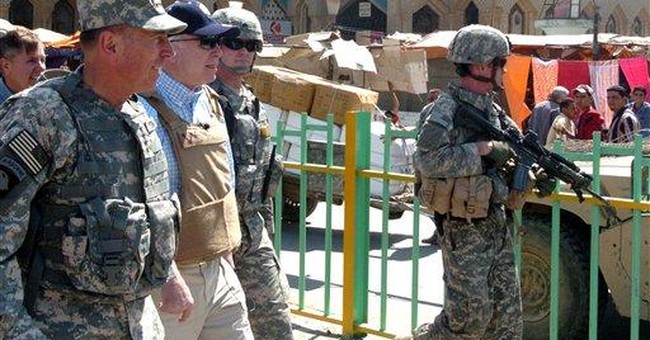 The glaciers are melting; the terrorists are advancing; Iran, after getting away with the kidnapping of 15 Britons, has begun enriching uranium; hardly anybody professes to like the president of the United States; Don Imus makes a bigger donkey of himself than he was by crawling to Al Sharpton, racial trickster extraordinaire, for forgiveness of a racial insult; and ... and ... I think that's enough for now.

It isn't that nothing good goes on. A lot of good goes on. We merely tune it out. Or, as more often is the case, the media tune it out for us, understanding as they do the human love of the awful.

We claim -- we, in the media -- not to be doing this. Instead, we claim just to be relating what's out there. Well, come on, bros. I've been in this business for nearly 40 years -- you can't fool me. We go to town on bad news.

Bad news is mother's milk to my proud profession. But it's more so now than ever, given the competition the Internet has opened up: 24-hour Websites, blogs of every kind and character, most straining as hard as possible to depress with the impossibility of the situation. Whoever gets there first with the worst gets the attention, hence the money.

We could properly consider this moment to be one of great pessimism about ... everything. We have overdosed on bad news.

Iraq is lost!!!! Wasn't that just what you were saying? Nearly everyone, under the inspiration of Nancy Pelosi and The New York Times, is saying so -- one problem here being that a new strategy of beat-patrolling, rather like the strategy Rudy Giuliani's cops used to tame New York streets, shows signs of working both in Iraq and Afghanistan.

I didn't say is working -- I said it shows signs of working. A Wall Street Journal story this week opened the blinds a little bit on Afghanistan, recounting how American troops are winning trust while living, often bathless, next to ordinary Afghans. The game isn't up yet.

Nor is it in Iraq, where Gen. David Petraeus, our new commander, is actively implementing his own get-next-to-the-people strategy. Too late for all that? How would we know such a thing? Oh. We just sort of concluded it, hmm, from reading the blogs?

Up go the wails about our supposedly deteriorating economy. Well. Joblessness in our supposedly deteriorating economy has dropped to 4.4 percent. The market is at an all-time high. Does that make everything wonderful? Not if your health insurance and your subprime mortgage rate just went up. On the other hand, is it not helpful to know that the sinews and veins of the society around us have not for now lost their force or capacity for support?

If optimism is sometimes dumb, blind pessimism may be dumber still. Fear freezes the blood -- it sends, now and then, the strong and able into premature despair and retreat. Run from Iraq?

Nice time for that, you might say, just when Iran is moving to take over the Middle East, nuke Israel and potentially choke off oil exports!

Four decades' experience in the media have not shown me the way of making the media tell the whole truth, give us the real picture. Whatever that might mean.

It would seem an infusion of civic courage is what we need at this moment: something like Churchill and Roosevelt gave the British and American peoples six decades ago. Here were leaders ... leading.

Have we any such now? I don't think we know -- yet. We have to hope so. We have to understand that the presidential race, this year and the next, isn't about who cobbles together the most interest groups. It's about who can most convincingly show Americans what they are made of, and what they can do when their chins finally quit scraping the sidewalk.