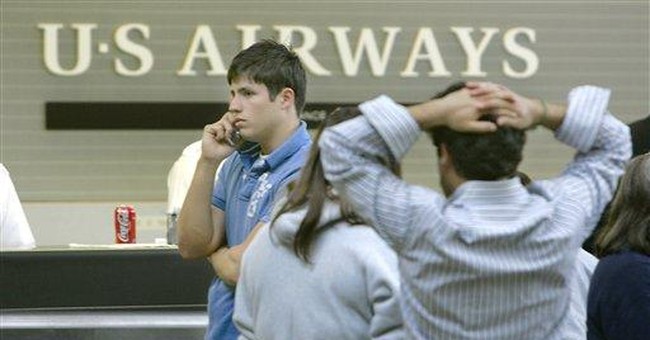 Who wants to lay some cash on the legal prospects of the six Muslim imams ousted from a U.S. Airways flight to Phoenix last November after their behavior -- e.g., chanting in Arabic -- scared passengers who thought another 9/11 might be in the offing?

The imams now are suing U.S. Airways and the complaining passengers for deprivation of their civil rights. How about even odds on their walking away from the U.S. judicial system richer than when they got ejected from the plane?

In this, the 21st century after Christ, minds no longer boggle. Pretty much everything gets a least a test run these days, including the claim that the United States, which fought a war to free the slaves, is the most racist nation on earth.

What we used to deride as mere "political correctness" holds considerable sway in American, as in Western, culture -- the view that critics of "xenophobia" and "sexism" and "homophobia" merit the benefit of the doubt. We know we're just so bad. When our country locks up terrorists at Guantanamo Bay, the terrorists, rather than their putative victims, get editorial and legal sympathy.

Humiliations visited by a few -- repeat, few -- weirdo soldiers at Abu Ghraib prison send us into fits of remorse. We can't "profile" particular air travelers for extensive attention at the gate, so we pretend that random Joe and selected Jane qualify as objects of valid suspicion.

No doubt, if the imams get their way, and their money, the government will devise a screening procedure for Methodists who hum "Amazing Grace" while checking luggage.

There used to be a rule of thumb: Better safe than sorry. Applied to the imams -- who, besides praying aloud and chanting, asked for seatbelt extenders and may have cursed the United States -- U.S. Airways should have boarded the six and waited to see what happened. Who knows, it might all have gone well.

And then, it might not have -- a point hardly lost on the complaining passengers, who face legal jeopardy on account of their concern for their own, and others', lives. Might we not call this a fine kettle of fish -- or mess of lentils?

The moral flabbiness and confusion of the modern West are that culture's most glaring features. The soft liberal guilt of the past century undermines the hardness necessary for facing -- well, let's just count up: 1) airliner hijackers, 2) suicide bombers, 3) hostage takers, 4) nuclear-bomb makers 5) garden-variety religious bigots. That's enough for now, I guess.

I still believe, after two decades, that one of the great speeches of our time came from the late Jeane Kirkpatrick's lips as she lit into those who "always blame America first" -- for this, for that, for anything.

"Got some guilt? Lay it on us" was the attitude she attacked -- alas, without fatal results. Her oratory and example helped re-elect Ronald Reagan president, but the guilt-edged blather of the left -- always looking for, and finding, new ways to cringe before Muslim assertiveness -- is, as they say, alive and well.

No factor has been more central to its present development than secularism -- the withering away of faith in a specifically Christian, if nondenominational, relationship to the God of the Old and New testaments, from whom flow the blessings of freedom and civility. "If you will not have God (and He is a jealous God)," T.S. Eliot observed, "you should pay your respects to Hitler or Stalin." Or, in the absence of those worthies, the terrorist. He'll do fine for that purpose, once he discovers -- and it may not take long -- who has the genuine, the unbendable convictions around here.