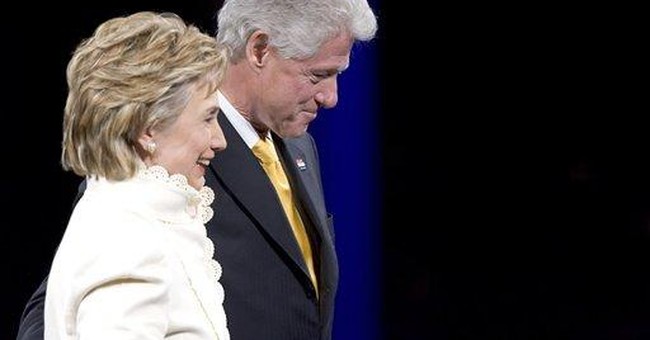 What I mean is, can't the Democrats see? Don't they have eyes ? A single set would help, under the circumstances.

What others are watching with mounting anxiety is the moral and intellectual implosion of a political party. Nor do I mean the Republican Party, for all its undoubted problems and shortcomings. I mean, rather, the party of Nancy Pelosi and Harry Reid and Pat Leahy and John Murtha and so on and so forth, who for two months -- and we're only getting started, folks -- have kept their country in carefully engineered turmoil.

It isn't necessary to love or, likelier, just put up with the Bush administration in order to feel the flesh crawl whenever an eminent Democrat prescribes for us. A "Democratic official" such as the Associated Press quoted this week, gloating in the uproar over the firings of a handful of federal prosecutors, as saying, "We know from last year that Democrats can win in Republican districts where corruption is an issue." Wherefore, bring on the corruption! And if we can't find any -- e.g., when it's shown that the Bush administration had every legal right to dump those Justice Department prosecutors -- let's hold hearings and issue subpoenas for Karl Rove.

A few days earlier, it was the Senate Democrats who were maneuvering, and failing, to use congressional power to lever American troops out of Iraq. Next week it will be something else. And the week after. And the week after that.

I asked, can't the Democrats see. "See what?" I am asked. Let us put it on the level that Mrs. Pelosi and Sen. Reid best understand, to judge from their reflex actions -- the level of everyday politics. Let us leave out considerations of the national interest as understood by substantial portions of the population, within and without the Democratic Party.

If the national Democrats have a functioning pair of eyes, can't they see the trouble they are storing up for themselves through their unslacking, unceasing attempt to "get" the president?

"Getting the president and Karl Rove and Al Gonzales and anyone else who might be handy -- is there another description for current Democratic practice? One would hate to describe it as "policy."

All may be fair in love and war, but all isn't necessarily smart: for instance, overlooking the lessons you teach others when practicing partisanship uber alles Take Iraq. What's the game there? We all know the answer to that one. The Democratic game isn't to help solve a major military-foreign policy crisis. The game is to make sure the Bush White House and the "neocons" get blamed -- so unforgivingly, indeed, that Americans entrust to the Democrats future responsibility for such matters.

What a noble precedent, at which two can play -- destroy, block, blame, obstruct; call for subpoenas; stir up the bloggers; fight, fight, fight. Not just in foreign policy, either. If "Democrats can win in Republican districts where corruption is an issue," so Republicans will figure out they can win in Democratic districts "where corruption is an issue." Implied, trumped-up corruption, if nothing better comes along, corruption equivalent to the current foofaraw over prosecutors.

History cautions us to be modest, very modest, as to our expectations of politics and politicians. The bitterness now boiling in Washington, to the impeachment, so to speak, of our ability to get done anything really worth doing, is old, much of it traceable to the aftermath of Vietnam, when Jimmy Carter was a pup. Newt Gingrich laid the wood pretty good to the Democrats of his era. At least there was no foreign war going on then. Our overarching problems seemed more manageable, and the political fun and games more tolerable.

The moral and intellectual implosion of the Democratic Party is first and foremost a Democratic matter -- yes. But the spillover effects of the implosion -- to which the Pelosi-Reid Democrats seem hardly to have given a thought -- are for all Americans to notice and to contemplate and to mourn.