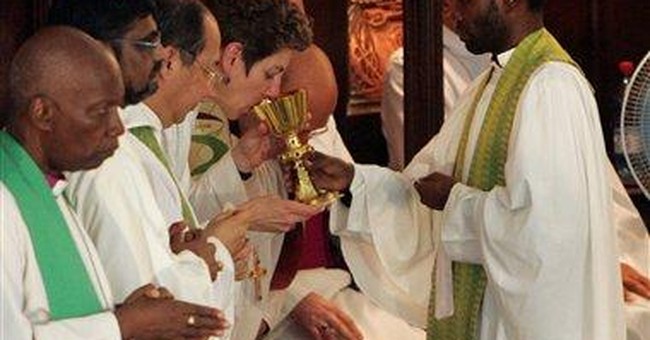 When Johannes Gutenberg wound up before the Great Judgment Seat, some six centuries ago, one can only imagine he got a suspended sentence, pending assessment of how well this printing press thing was likely to work out. And here we are still wondering.

For instance: Is homosexuality the root of the Episcopal Church's and the Anglican Communion's well-advertised anguish, as the media -- Gutenberg's heirs -- seem to believe and teach? Or, as with so much the press spews out half-digested, does something else go on -- something deeper, something reproachful of human behavior across the board?

True, the latest squabble finds Asian- and African-Anglicans sternly warning their American and European cousins to disengage from the quest to normalize same-sex relationships or else. But as Peggy Lee inquired, "Is that all there is?"

Not as Laurie Goodstein, in The New York Times, reports the matter -- moving at least part of the way toward a surer understanding of the theology, instead of the politics, presently at stake. "The underlying differences [between Anglicans]," she writes, "are over the basic understanding of tradition and Scripture. The conservatives say they are something sacred and fixed, while the liberals say they can be open to interpretation and responsive to new information." Not a perfect formulation, but better than "conservatives refuse gays their undoubted rights."

The media, which had covered civil rights and feminism with sympathy, found gay rights at least as engaging a matter, and as central to modern notions of liberation. If you opposed gay rights -- so the manufactured mythology went -- you probably hated gays.

Christians who worried about gay rights had not a leg to stand on: So went the approved narrative, encouraged in headlines and reporting highly favorable to the idea that old-fashioned Christian moral theology required radical updating. What we used to think about gay rights (we heard) was out of date. We needed to know the tendency was inborn.

Well, hmmm. The print and electronic media aren't exactly stand-ins for the College of Cardinals, but they could have tried a bit harder. Often enough they manage to obscure the reality that supernatural authority, rather than one moral perception, underlies the Anglican crisis. As it underlies the modern debate on sexuality, period.

The "homosexuality debate" in the worldwide Anglican Communion, which paid the matter little attention until three decades ago, is about how much authority the individual may rightly assume in his own personal arrangements and how much he should cede to his Creator.

Who's in charge here, God or us, is roughly the question. That the Bible, God's word, takes a high view of obedience to divine authority and a low view of what might be called I'll Do It My Way, is the real question, not whether to bless same-sex unions in Episcopal churches.

The media, with ample help from gay-rights exponents, helped perpetuate the notion that God was more bystander than participant in a controversy that was about rights and choices, not duties, not obligations, not responsibilities, not behaviors that advanced divine ideals as to the leading of life.

I wouldn't expect The New York Times to pull us (or want to pull us) out of this, our predicament of understanding. We'll go right on, doubtless, acting as though the Sovereign Individual trumped God -- or seeing the divine plan as constantly developing, like the news itself.

It's sad all the same. Few conservatives I know feel for most gays other than affection and brotherly (or sisterly) concern -- the same feelings they hope they themselves inspire. Few want to "bash" anybody or send anyone to Satan, the author of division, who must be smiling with satisfaction at the uproar going on among his supposed adversaries. Every last one of 'em.