The Bush Library And Its Foes 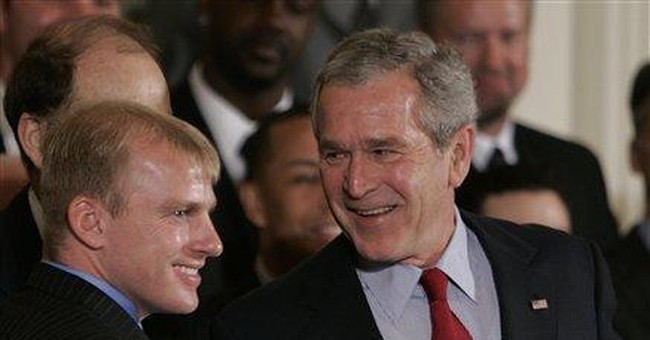 Drat. Here I was angrily spitting out nails on account of the George W. Bush presidential library's indicated destination -- my back yard, residentially speaking. What I learn, courtesy of the ever-vigilant New York Times, is that significant numbers of faculty liberals at SMU don't want the library.

Residential proximity isn't what American liberals, as a class, object to when it comes to their adversary, the president. Unlike your obedient servant, most of them wouldn't be able to walk from home to the Bush presidential library, dodging traffic all the way. What our professorial liberals object to is, as one said, "a permanent Bush presence on campus." How awful! A reminder that Americans, first through the Electoral College, then through popular vote, signed off on George W. Bush's presidency.

I join my brothers and sisters in feeling, insofar as they feel this way, that our neighborhood doesn't need any more massive buildings, not to mention any Secret Service-generated traffic tie-ups. Then I consider the terms in which a faculty letter of protest, drafted by Susanne Johnson, a theology professor, is framing things.

The Johnson letter is a perfect epiphany of Bush-bashing. Bush, we learn from it, is presently getting "poor marks." These "come from those Americans who question Bush policies such as "erosion of habeas corpus, denial of global warming, disrespect of international treaties, alienation of longtime U.S. allies, environmental predation, disregard for the rights of gay persons, a preemptive war based on false premises, and other perceived forms of disrespect for the created order and global community." Anyone for the John Kerry Non-Presidential Library?

A chunk of the scholarly community is committed already -- to judge from its activity on one generally disengaged campus, SMU's -- to make sure in advance that history assesses George W. Bush as a disaster.

I grant the tendency of presidential libraries to spin a more or less generous view of their namesakes. I still have no reason for seeing the Bush library as a center for the confirmation of the dark conspiracy theories to which liberal bloggers like Atrios and the Daily Kos are given. I hope the library might be evenhanded in appraisal of Bush 43's achievements, whatever they prove to be, however they look, two whole years hence, and later. Verdict before sentence, you know? The once-classic approach, consigned, in Bush 43's case, to the trashcan. We're to judge Bush right now by the "poor marks" that Prof. Johnson and her supporters shower upon him.

It's fun to note these. "Erosion of habeas corpus"? For that one their contemporaries could have impeached both Abe Lincoln and Franklin Roosevelt. "Alienation of longtime U.S. allies"? I see -- we should have let the French and Germans vote on whether to attack Iraq. "Disregard for the rights of gay persons"? How's that again? Where? How? From Bush's refusal to praise the revolutionary, and I do mean "revolutionary," notion of gay marriage?

Given that SMU's professoriate lacks the clout and willpower of Harvard's -- which helped to force out President Lawrence Summers for suggesting that men and women might approach mathematics with differing levels of interest -- I predict (a little sadly) that the Bush library will wind up at SMU. I imagine equally we SMU neighbors will yet see Cindy Sheehan, Ramsey Clark, and like touchstones of reason, reeling through our flower beds as they battle to set the record straight on their adversary, George W. Bush.

That there's plenty to say, pro and con, about any president or holder of public office seems a truism. Is it to be assumed such things can't get said at a Bush library? The professorial, and journalistic, left greatly underestimates the yearning of conservatives for a fair appraisal of a president to whom by no means all are wedded sentimentally.

How sad if noisy liberals get away with sucking the intellectual air out of any room in which discussion turns to Bush 43! Won't we learn a lot then -- about them, about their stale political neuroses? .