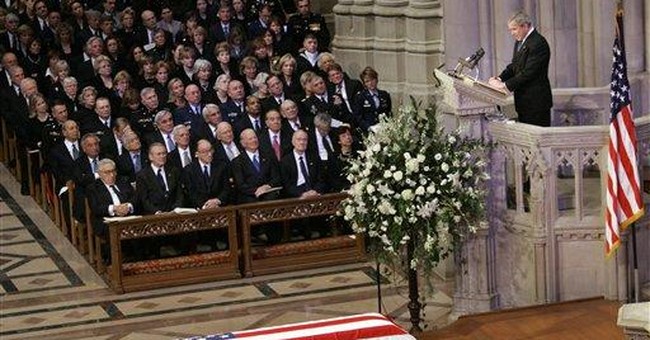 A U.S. president never really dies -- he takes a kind of celestial powder, enabling the "experts" to talk themselves blue in the face about the meaning of his life and his tenure. Welcome to the gabfest on the late Gerald Ford, an occasion worth joining briefly for the perplexities it raises concerning so-called "social conservatism."

In other words, should American conservatives, as Ford seemed some of the time to think -- and Betty Ford continues to think -- just try to minimize government while staying well away from the social issues, such as school prayer, abortion, stem-cell research and same-sex marriage? The New York Times quotes former Wyoming Republican Sen. Alan Simpson as saying, "Jerry believed [the Republican] party was about a right to be left alone." Likewise, The Times notes Ford's support for the inclusion of gay Republicans in party affairs.

Are small-government Republicans and Republicans who want to stop gay marriage incapable of working in harness together? Wait: Have they any business in the same harness? That's the question, and it nags and sizzles.

The Ford policy, as widely represented to today's audience, was simple: Control spending and regulation, and let people live as they like. In fact, the matter wasn't clear-cut back then and, if anything, is murkier now.

For one thing, the so-called "religious right" wasn't even around during the Ford presidency. It arose during Ronald Reagan's campaign against Jimmy Carter. Same-sex unions weren't so much as a gleam in Congressman Barney Frank's eye.

The problem is more than chronological, though. Let's think a minute: Where did the "social issues" drop from, Mars or Jupiter? It was, in fact, the interventions of Big Government that produced them. First, the U.S. Supreme Court outlawed even nondenominational prayer in public schools. You can argue that the court should have. What you can't argue is that the prayer cases were Small Government at work. Au contraire. Roe vs. Wade was more of the same -- far more. In its abortion decisions, as Ramesh Ponnuru points out in "The Party of Death," the court has "forbidden any state from prohibiting abortion even in the final stages of pregnancy." How's that for the Jeffersonian vision of tiny, non-intrusive government?

Likewise, it was a state Supreme Judicial Court -- Massachusetts' -- that three years ago overthrew legal and moral precedent alike in ordering the state legislature to let gay couples marry. Just another blow for "small government," hmmm?

And what are those who object strenuously to such interventions supposed to do anyway -- tug obediently at their forelocks, thanking the nice justices for wising up their countrymen? What the social "progressives" would like is for the objectors just to shut up and go away. When the objectors instead exercise their First Amendment right to organize and protest, they get sliced and diced in the media for Trying to Ram Outmoded Religious Convictions Down Other People's Throats.

What say? Argument ends anytime the progressives pull ahead?

Little of this relates directly to anything Gerald Ford said or did while president, but it reminds us how grotesquely complex is this business of trying to rule social conservatism out of order on "small government" principles. How could it ever be out of order in a democracy to assert one's democratic prerogatives, least of all when one branch or another of government has squashed those prerogatives flat?

Just leave us alone, huh? No government ever, small or large, has left its citizens wholly alone, either as to collective needs (order, peace, etc.) or collective norms (justice, human dignity, etc.). Nor does the death of the worthy Gerald R. Ford advance the discussion much. It facilitates the discussion, greases the mental gears. That could be enough -- for the moment.