Huckabee Plays For Kingmaker and VP 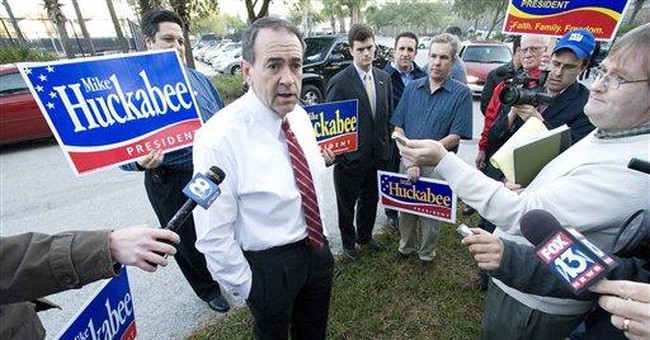 Florida delivered as promised as national front runners were singled out in the state’s primary contest. A record-setting turnout gave Senator John McCain 57 winner-take-all delegates and Senator Hillary Clinton a little more than a few days of bragging rights. The Democratic Party had stripped Florida of its delegates as a penalty for moving its primary ahead of February 5.

Floridians were also voting on a Constitutional Amendment to lower property taxes— bedeviling pollsters once again as the amendment brought out more voters, including more moderate voters, which helped give John McCain a clear margin of victory. These casual voters were not factored into Mitt Romney’s game plan and it cost him dearly.

McCain also had last-minute help from Senator Mel Martinez and Governor Charlie Crist. The Martinez endorsement was influential with south Florida Hispanics who hope for a more flexible plan to deal with the nation’s illegal immigrants. And Governor Crist had long been in the Giuliani camp, his last-minute switch from Giuliani to endorse the Arizona senator further helped McCain. (Rumors are Crist brokered his support to McCain for Vice President consideration but the McCain camp is denying it.) Jeb Bush, whose former campaign team and staffers ran the Romney effort, personally stayed out of the endorsement bidding process, hurting the former Massachusetts governor.

And who may be making the best case for V.P.?

Mike Huckabee finished fourth, right behind Giuliani but had a successful week of fundraising in the state. He remains the least talked about candidate in national media circles, but he may be holding the keys to the White House. Not for himself, mind you, but for another.

Many agree that the results in Florida are a good sampling that mirrors the country as a whole. In light of that, look at how Huckabee faired with the evangelical base. Remember, they are voters that Romney also needed to win in Florida as well in future contests.

According to Florida exit polling conducted by Edison Media Research, among those who identified themselves as evangelical Christians, McCain received 30 percent, Romney 29 percent and Huckabee 29 percent. This three-way split of the “values” vote indicates confusion within the base, probably over Huckabee’s electability and the division of who, among the other two contenders, is best suited to carry the social conservative agenda.

While the split casts doubt about Mike Huckabee’s ability to win outright in other states, it clearly shows a solid base for the governor that will allow him to collect a respectable amount of delegates in non winner-take-all states.

With Super Tuesday on the horizon, Huckabee stands to do well in southern states like Georgia, Alabama, Tennessee and his home state of Arkansas. His poll numbers in West Virginia and California (no longer a winner-take-all state) may deliver delegates to him as well.

If Mike Huckabee garners enough delegates to keep McCain or Romney from going over the top before the convention, he may be central in selecting the Republican nominee and shaping the future course of this nation, while making a good case for joining the ticket as V.P. Increasingly, John McCain is sounding like Huck’s preferred candidate, should he get that opportunity.

Even if this scenario does not play out he still makes the best case for a wining ticket in November. The road to the White House still runs through the south. And in the south, social conservatives are a strong voting block and they are relating well to Mike Huckabee. He has done well reaching out to non social conservatives who are warming up to him the more they hear him speak.

Florida’s Governor Charlie Crist will make his case to John McCain for the V.P. spot, but polling will show that Mike boosts both McCain or Romney is ways that Florida’s governor can’t touch, especially in many southern states.

Stay tuned in the days to come as Mike Huckabee could remain a significant part of the national spotlight.