What the Republican candidates for president need to do right now 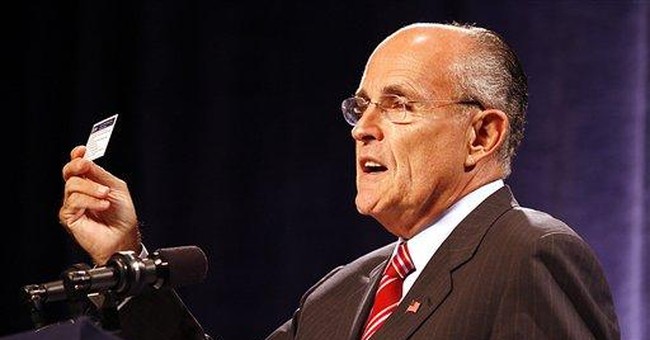 GOP Hopefuls Keep Distance From Bush; Republican Candidates Run from Bush; Republicans Backing Away From Bush. These are the headlines we have and will continue to see again and again throughout the remainder of the 2008 primary campaign and after every GOP debate. With approval numbers in the high 20s and low 30s, the president cannot expect the GOP candidates for president to run toward him, and on any number of issues the candidates are well within their rights and judgments to put daylight between the outgoing administration and their hopeful one.

But on one issue, the candidates should not run from the president, in fact they should run toward him and close any distance or doubt between them: the battle of our lifetime, the global war against Islamic terrorism and its battleground Iraq.

We propose they do so as soon as possible, in one press conference where they all stand united in one voice and say: “On this issue, on the war against Islamic terror, in the battle for Iraq, we stand with one voice and one policy: Victory. We support both the troops and the mission and you cannot divide that support. The troops and their generals believe in what they are doing, that they can win if they are given the necessary support. We believe them, we believe in them, and will do everything in our political power to help see them through to victory. On this issue, there is no daylight among the president, our servicemen and women in Iraq, and us. We will not support premature withdrawal or surrender.”

Let the press conference happen soon, as the House has just voted to stop the war in April of next year; the Senate is debating the very same; other politicians are arguing for an even sooner withdrawal; and the media is making heroes of a handful of Senate Republicans who are distancing themselves from the president on Iraq.

Let it take place at Ground Zero in New York. Politicizing the war? Hardly. That has already been done by those who have stampeded to the Senate and House floors, rushing to be the first with a new withdrawal plan for Iraq; or by declaring the war “a failure;” or “a meatgrinder;” or the lives of our soldiers “wasted” or “squandered;” or saying the president lied us into war; or by the attempted rewriting of history from the 1998 Iraq Liberation Act (signed by President Bill Clinton) to what those who voted to authorize the war in 2002 did and did not say — did and did not mean — when they spoke in favor of and voted for the authorization of that force.

Do the candidates need to distance themselves from the president in order to win the presidency? We think not. Americans will not vote for surrender when the stakes are clearly laid out. Does the left that claims they support the troops and want to end their strain have the moral high ground? No, and John McCain (who knows a thing or two about a war that politicians undercut when the military is committed to victory) put this will-o-the-wisp political argument to rest on the Senate floor last week when he said, “The fact is, when you lose a war, the consequences of failure are far, far more severe on the military than the strain that’s put on the military when it’s fighting. It’s a fact.” McCain then reviewed the “movie” he had a cameo role in, saying it led not only to a demoralized military that it took a decade to recover from, but it led to “three million people slaughtered in one of the greatest acts of genocide in history…thousands killed in reeducation camps, and thousands more executed,” all while the “liberal Left” argued “Yeah, we cared about American casualties.”

Have there been mistakes in Iraq? Of course. Has there been a war without mistakes? Of course not. In single battles in World War II (what some historians call the last moral war we fought), we lost thousands of men. Reread the history of D-Day and the battle of Normandy. Look at the numbers from Okinawa or Suribachi or Saipan or Tarawa. Such fits and starts, mistakes, and loss of life are the sad nature and terrible fact of war. Perhaps a too comfortable culture or a culture too reliant on immediate gratification has forgotten that. But even the generals who have described war as hell have not declaimed against the need for us to fight wars, and neither have the soldiers who continually sign up to defend this country and fight in those wars.

Was going into Iraq in the first place defensible? Only if a war against Islamic terror is defensible. Before one U.S. soldier landed in Iraq, Abu Musab Zarqawi and Abu Ayyub al-Masri (the first leaders of al Qaeda in Iraq) were freely operating there. Iraq’s government had given haven to Abu Nidal and Abu Abbas. Saddam Hussein was cutting checks to suicide bombers and had sent missionaries to meet with al Qaeda outside of Iraq (as Lawrence Wright notes in his book The Looming Tower).

Today, al Qaeda’s Ayman al-Zawahiri, minces no words about the stakes in Iraq: “First, expel American forces from Iraq. Second, establish a caliphate over as much of Iraq as possible.” More recently, Zawahiri urged his fighters to “hurry to Iraq.” Are these messages unclear? Do they show the fight against al Qaeda is somewhere other than Iraq? To the contrary: Iraq is the central battlefield in the war of our lifetime — as well as the proposed seat of the new caliphate. To walk away from that, to surrender that battlefield, is to surrender the whole war.

Perhaps the greatest mistakes leading up to September 11, 2001, involved not listening to al Qaeda leaders clearly enough, not taking them seriously enough. When Osama bin Laden declared war against us in two separate fatwas in the 1990s, with orders to his troops such as “kill the Americans and plunder their money,” and his calling on his mujahadeen to “launch the raid on Satan’s U.S. troops and the devil’s supporters allying with them, and to displace those who are behind them so that they may learn a lesson,” he was just as clear as Zawahiri is today. We can repeat the errors of not taking al Qaeda’s declarations seriously, or we can believe them, secure in the knowledge that their troops have acted in concert with their leaders’ calls to jihad against us every time.

Beyond the imperative to fight toward victory, an abandonment of our fight in Iraq will leave a hell on Earth where Iranian militias, Baathist insurgents, Sadr forces, and al Qaeda all clamor for the remains. This is the grand hypocrisy of today’s surrender siren song, pointed out again and again by Independent Democrat Joe Lieberman of Connecticut: “For us to abandon Iraq now would be to create the kind of place the human rights advocates today rightfully agonize over and demand action in — Darfur.” Lieberman has it right: Abandoning the troops now, he said on the Senate floor, “means telling our troops to deliberately and consciously turn their backs on ethnic cleansing, to turn their backs on the slaughter of innocent civilians — men, women, and children singled out and killed on the basis of their religion alone…This makes no moral sense at all.”

That could be a bumper sticker: “If You Like Darfur, Then Leave Iraq.” But even that bumper sticker does not go quite far enough. Does anyone doubt that if Iran is victorious there, unlike Darfur, its control of Iraq will embolden a soon-to-be-nuclear regime that wants us dead and supports other terrorist organizations like Hamas and Hezbollah? Pretty soon, with the facts laid out, it becomes obvious to all but the purblind that there would be no greater loss in the war on Islamic terror than abandoning Iraq before the job is done.

Major General Rick Lynch of the Third Infantry Division said it best when he said on our radio show Friday: “Our troops are American soldiers fighting for America right here.” And so now is the time for every Republican candidate to put aside their arguments with each other — and the president — and stand together as one in supporting the president, our troops, and their mission, and say: “While we are divided on some things, we are not divided on this. Not this mission, not this war, not this party, not for this country. We support our troops, and we support their — and America’s — victory.”

FLASHBACK: Biden Promised Not to Raise Taxes. Is That About to Change?
Townhall
John Kerry says out-of-work oil/gas workers should be grateful to Joe Biden for giving them 'better choices' like building solar panels [video]
Twitchy
Reddit Trolls Beat the Stock Market, and the Elites Are Really, Really Mad
Redstate
Disagreeing With Biden's Transgender Policy Is 'Incitement' Now?! Facebook Says So...
PJ Media