We are not a sick society; we are the last best hope 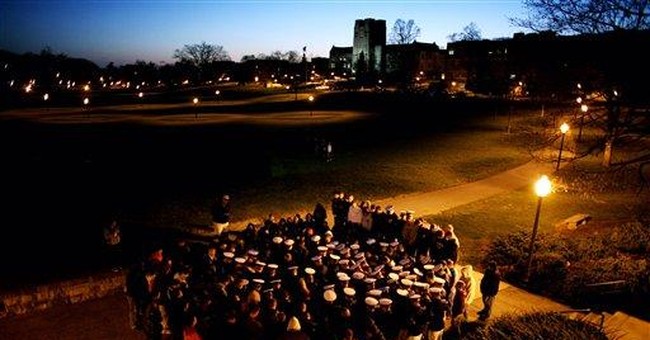 The following is a transcript from the Bennett Morning's radio show this morning.

We’re talking about yesterday in Blacksburg. Some people, it hasn’t come up on this show, because this audience wouldn’t dare bring it up, but there’ll be people saying, “Well, it’s a sick society. You know, it’s just a crazy, wigged out, sick society.” I’ve got a book coming out today, not the best timing for a book, it’s all right. It’s a good book, America: The Last Best Hope, Vol. II. And at the very end of the book, I recall a speech that Ronald Reagan made in 1974. It was at C-PAC, Conservative Political Action Committee. We talked about this a couple of weeks ago, and we pointed out John McCain should have been there, and should have said the last time I was here, I was just released from Hanoi Hilton, and I was introduced by someone you all may remember. His name is Ronald Wilson Reagan. It would have been a great thing for John McCain to do.

But here’s what Ronald Reagan said at that time, and think about this in regard to what some people are going to pronounce over the next days and weeks. Ronald Reagan said this, “We are not a sick society. A sick society could not produce the men who set foot on the Moon, or who are now circling the Earth above us in the Skylab. A sick society, bereft of morality and courage, did not produce the men who went through these years of torture and captivity in Vietnam. Where do we find such men? They are typical of this country. They are typical of this land as the founding fathers were. We find them in our streets and our offices and our shops, and the working places of our country, and our farms.” And I might add, in our military. “We cannot escape our destiny, nor should we try to do so. The leadership of the free world was thrust upon us two centuries ago in that little hall of Philadelphia. In the days following World War II, when the economic strength and power of America was all that stood between the world and the return to the Dark Ages, Pope Pius XII said, ‘The American people have a great genius for splendid and unselfish actions. Into the hands of America, God has placed the destinies of an afflicted mankind.’ We are indeed, and we are today, the last best hope of man on Earth.”

And then I end the book. So, so there. That’s all I have to say about that. Liviu Librescu, a professor at Virginia Tech, was such an American, by adoption. He adopted this country, taught aeronautical engineering, and yesterday, saved young Americans. Eisenhower and the American military liberated the death camps, saved people like Librescu. Yesterday, he returned the favor, and stood in the doorway while students were able to escape. He survived the Holocaust and Hitler to do this. So the message, the story, it’s said on this show, the beat goes on.