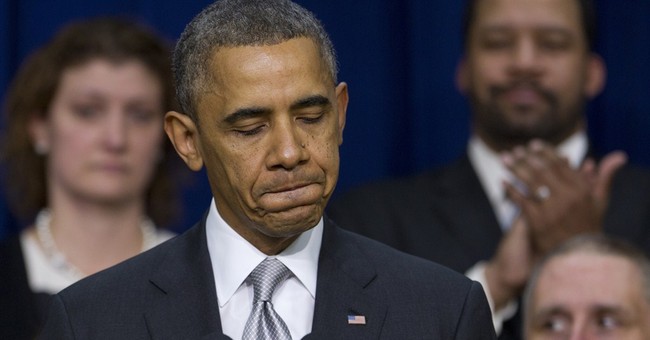 When George W. Bush was president of the United States, many of the left fell prey to what columnist Charles Krauthammer called "Bush Derangement Syndrome": "the acute onset of paranoia in otherwise normal people in reaction to the policies, the presidency -- nay -- the very existence of George W. Bush." With Bush out of office, BDS has waned somewhat. Unfortunately, it has been replaced by a converse condition, just as grave and dangerous to the mental stability of its victims: "Obama Worship Syndrome." Primarily affecting low-information voters and members of the mainstream media, Obama Worship Syndrome attributes impossible capabilities to Obama's political opponents, finds excuses for every Obama failure in everyone around him and praises the president as the finest politician -- nay, human being -- of our time.

On Monday evening, for example, CNN's Piers Morgan considered whether New Jersey Gov. Chris Christie could run for president as an overweight man. Morgan, with stars in his eyes, asked crisis-management expert Judy Smith, "After the perfect Barack Obama -- who's a perfect physical specimen to many people's eyes -- does it matter?" After toweling himself off, Morgan then asked whether Americans could even stomach "a regular kind of guy who likes cheeseburgers and beer, but appears to be a straight talker?"

Morgan's OWS pales in comparison to MSNBC's Chris Matthews, who infamously declared that Obama made his leg tingle. But that's just the first symptom of Matthews' OWS: He's also declared Obama "the perfect father, the perfect husband, the perfect American," explaining that Obama has "never done anything wrong in his life, legally, ethically, whatever"; he's blamed the sun for Obama's pathetic June 2013 speech in Berlin (it glared off his teleprompter, Matthews insisted); and he's compared Obama to Henry V among others.

Morgan and Matthews are extreme cases for sure. But the most widespread symptom of OWS lately is the media's bizarre insistence that Republican opposition to Obamacare is responsible for the botched rollout. "You could argue that there are some Republicans that are trying to sabotage the law," NBC's White House correspondent Chuck Todd said back in July. The Washington Post did a full story quoting members of the Obama administration blaming Republicans for Obamacare's rolling record of epic failure. Jamelle Bouie of The Daily Beast wrote that the "Affordable Care Act needed GOP cooperation to succeed."

This is idiotic. Obama rammed through Obamacare legislation without a single Republican vote. As he has repeatedly stated, it is "the law." It is his job to implement the law, given that he runs the executive branch. Yet his media defenders continue to maintain that Republicans, who unsuccessfully attempted to defund Obamacare, somehow bear blame for Obamacare's slow-motion collapse.

It's not just Obamacare. After spending years trumpeting Obama's supposed hardheadedness on Iran, the media has now performed a complete about-face on the issue: Iran has suddenly become a potential peace partner, and Obama is a historic peacemaker. Sure, Iran has already declared its intention to continue enriching uranium, has said it will continue building the Arak nuclear reactor and has never backed off its stated intention to destroy Israel. But "The One" must be defended.

Obama Worship Syndrome is far more dangerous than Bush Derangement Syndrome. Speaking truth to power is often worthwhile, even when such action springs from personal dislike. But drool-cup god-worship is never worthwhile, especially with such a power-hungry commander in chief.