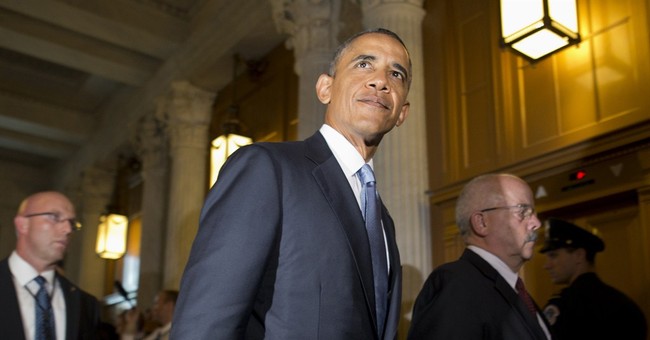 In August 2012, President Obama inadvertently set America up for war: He said that if Syria crossed a "red line" by using chemical weapons, that would amount to a "game changer". In August 2013, Syrian dictator Bashar Assad apparently did just that, gassing some 1,429 people in Damascus. On Sept. 1, 2013, Secretary of State John Kerry made a compelling case for American action in Syria. He did so by comparing Syrian dictator Bashar al-Assad to Adolf Hitler. Labeling Assad a "thug and a murderer," he said, "Assad now joins the list of Adolf Hitler and Saddam Hussein (who) have used these weapons in time of war." A few days later, he told a conference call of Democrats that if Congress didn't authorize action against Syria, the United States would face a "Munich moment". By this, he meant that the U.S. would be in danger of appeasing a dictator bent on aggressive behavior, just as British Prime Minister Neville Chamberlain appeased Hitler after Hitler's annexation of the Sudetenland in 1938. Chamberlain declared "peace in our time" after Munich; within months, World War II began. That, Kerry declared, could not happen again.

After stalling for time by going to Congress for approval of what Kerry hilariously called an "unbelievably small" action, Kerry spoke out at a press conference about what Assad could do to prevent military action. "Sure, (Assad) could turn over every single bit of his chemical weapons to the international community in the next week -- turn it over, all of it without delay and allow the full and total accounting (of it), but he isn't about to do it, and it can't be done," Kerry said. The White House quickly walked back on Kerry's comments, stating that Kerry had obviously been speaking "hypothetically". Even Obama-friendly CNN called the Kerry line a "gaffe."

That's when the Russians decided to prank the Obama administration.

Russian President Vladimir Putin quickly proposed that he could broker a turnover of Syrian weapons of mass destruction to the international community. So did Syria, out of a desire to "pull the rug out from under the feet of American aggression." And the Obama administration, looking for a way out of its self-created box, quickly embraced the proposal. Now, it turned out, Kerry's gaffe had been a planned remark of genius. In fact, Obama and Putin had been discussing just such a proposal last week at the G20! The Obama administration would be happy to assign responsibility for Syria's WMD back to the United Nations -- the same group of folks Obama himself had derided as "paralyzed" just days earlier on Syria.

The Obama administration claimed international triumph. House Minority Leader Nancy Pelosi praised Obama's "strength," which she said had brought forth the Russian proposal. Former Secretary of State Hillary Clinton did the same: "It is very important to note that this discussion that has taken hold today about potential international control over Syria's stockpiles, only could take place in the context of a credible military threat by the United States."

Hours later, the Russians announced that they would be delaying all action at the U.N. Security Council, according to reports. Putin declared that in order for the Russian plan to work, the United States would have to forestall military action in Syria.

This is called getting played. And yet the Obama administration is too busy declaring peace in our time to acknowledge that the Russians just allowed Assad to cross President Obama's idiotic red line and get away with it. If Obama had shut up in August 2012, this never would have been an issue. He didn't, and so American credibility was on the line. Now American credibility is a laughingstock. All the arguments Obama and Kerry themselves made regarding Syrian action -- that Assad was evil, that Iran had to be deterred, that morality demanded a response -- damn the Obama administration. And everyone knows it.