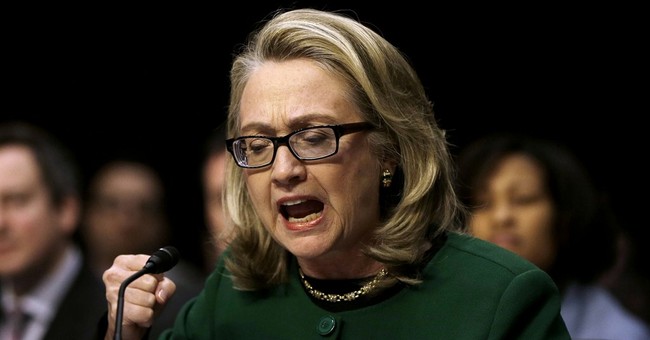 First, there's an NBC miniseries in the works, retelling the period of Clinton's life when she transformed from pseudo-wronged first lady to secretary of state. The miniseries will span the time period from 1998 and the Lewinsky scandal forward. In an eminently sycophantic bit of casting, the lovely Diane Lane will be playing the significantly less lovely Mrs. Clinton. The press statement on the miniseries sounds like a logline from Hillary's prospective gravestone: "Clinton's life as a wife, mother, politician and cabinet member." The mini-series is slated to premier in 2015. Undoubtedly, it will ignore Hillary's Machiavellian manipulations with regard to the "vast right-wing conspiracy," her alleged anti-Semitic slurs, her carpetbagging, her accomplishment-free tenure in the Senate and her dramatically unsuccessful term as secretary of state. Don't even bother asking about Benghazi.

But that's only Hollywood's first step. Next, Tinseltown will be releasing a biopic of Hillary from her early life, when she was going out with Bill Clinton and hanging around in the Nixon administration. The author of the script, one Young Il Kim, says the movie is "really a journey of a woman who was torn between her personal desires and her professional ambition." The script itself is said to be on the ridiculous side, with a scene in which Hillary and Bill "devour" each other (that fictional meal may have been one of the only two Bill ever had with Hillary): a line in which Hillary tells Bill "I love you and I want to f--- you," and an explanation of why Hillary wears pantsuits. Starlets including Carrie Mulligan, Scarlett Johansson, Amanda Seyfried and Reese Witherspoon have reportedly been considered to play Hillary.

Finally, there's a Hillary documentary produced by Oscar-winner Charles Ferguson and funded by CNN. CNN expects the documentary to show up in theaters before broadcasting on the most trusted name in news. Or, rather, in snooze.

There's only one problem with all of this: Hillary just isn't that interesting. The media virtually universally threw Huma Abedin under the bus over the past two weeks after she attempted to imitate Hillary to save her embattled penis-tweeting husband, Anthony Weiner. She didn't get away with it, not because she's not Hillary -- she's as close to Hillary as it's possible to get -- but because her husband isn't Bill. And that's the sad truth about Hillary: She's been riding her husband's coattails for decades. If she were Hillary Rodham rather than Hillary Clinton, she'd be in the same boat as Nancy Pelosi or Barbara Boxer or any other myriad number of powerful women with no shot at the presidency -- and no love in Hollywood.

The Hollywood love affair with Hillary is truly a love affair with Bill that never ended -- only instead of chocolates and flowers, Hollywood is preparing to blow tens of millions of dollars on failed mash notes to the prospective 2016 nominee. Hollywood is willing to sacrifice that cash to see a Hillary presidency, which shows how truly partisan a town Hollywood is. But at least we'll get to see a lot of pantsuits for the next three years.