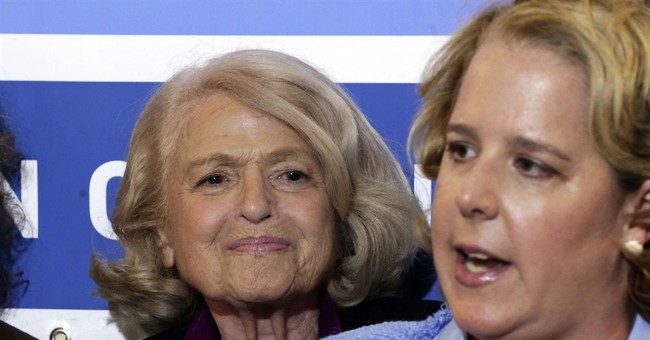 The ramifications of that move are stunningly far-reaching. The argument that gay marriage doesn't affect straight marriages is a ridiculous red herring: Gay marriage affects society and law in dramatic ways. Religious groups will come under direct assault as federal and state governments move to strip them of their non-profit statuses if they refuse to perform gay marriages. Public schools across the country will be forced to teach homosexual marriage alongside traditional marriage. Religious business owners will be leveraged to pay for benefits for same-sex spouses.

In the left's view, all of this is to the greater glory of humanity. In the leftist view, there is no freedom to associate or freedom of religion if those rights come into conflict with the left's view of morality. Religious florists must provide flowers for gay weddings; religious organizations must pay for abortion and contraception. What you do in your church makes you immoral, says the left -- so immoral that your church must be removed from the public square or forced to bow to the power of the state.

For years, the left proclaimed that conservatives seek a theocracy, that religious Americans are the domestic equivalent of the Taliban or other religious fundamentalist dictators. That wasn't true; placing the Ten Commandments, the foundation for Western civilization, in public view is hardly beheading religious dissenters. But that rhetoric had an impact. It sent religious Americans into retreat. For several decades, religious Americans have abided by an unspoken libertarian agreement: You leave us alone, and we will leave you alone. And so the debate largely ended with regard to legislation on sexual mores. It largely ended with regard to public displays of religiosity.

But the tacit libertarian agreement didn't exist for the left. The left saw the power of government as a replacement for God entirely. The Ten Commandments the left so despises were reversed to apply to the state. The state is our god, to whom we address our petitions. No other gods may come before the state, including the traditional God. The state's name may not be taken in vain, even to enforce privately negotiated contracts. The state will provide us with Sabbath -- years of Sabbaths, actually, at the expense of others. Fathers and mothers are not to be honored. In fact, fathers and mothers are unnecessary. Murder in the name of the state can be justified by political expedience, depending upon whom the state labels an enemy. Sexual promiscuity is condoned and even sponsored by the state. Stealing the money of others is sanctioned by the state. Falsehood in the name of political correctness is mandated by the state. And as for coveting ... well, without it, could we justify a single redistributionist government scheme?

Same-sex marriage is not the final nail in the coffin for traditional marriage. It is just another road sign toward the substitution of government for God. Every moral discussion now pits the wisest moral arbiters among us -- the Supreme Court, President Obama -- against traditional religion.

"Today we can go back to California and tell all four of our boys that your family is just as good as any other family," said one of the plaintiffs in the Proposition 8 case. Of course, she could have told her adopted children that at any time. But she wanted the moral imprimatur of the state to justify her ethics.

And why not? The state now grants moral authority and legitimacy, even in the face of thousands of years of Judeo-Christian-based Western civilization. It answers our prayers and cares for our needs. Sadly, it may take decades before the American people recognize that the state is both fiscally and morally bankrupt. But in the meantime, we'll laud ourselves for our unearned moral superiority, conferred on us by a benevolent government golden calf of our own making.