America Loses the War on Terror 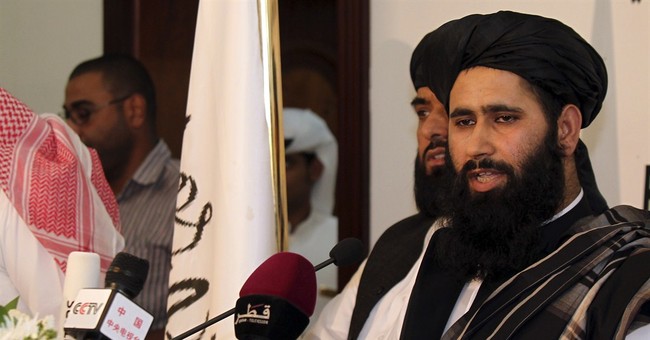 On Sept. 11, 2001, al-Qaida terrorists, on orders from their superiors based in Taliban-controlled Afghanistan, flew U.S. commercial planes into the World Trade Center towers and the Pentagon. They would have targeted the White House or Capitol with a fourth plane if not for the heroism of the passengers on Flight 93. Overall, almost 3,000 Americans were murdered. Nine days later, President George W. Bush told the nation, "We condemn the Taliban regime. ... Our war on terror begins with al-Qaida."

Our war on terror is now over. It's over not because President Obama says it is, though he has implied as much over the past several weeks. It is over because we have surrendered. As of this week, the United States of America is allying with the two main forces behind Sept. 11: We are sending guns to al-Qaida in Syria, and we are entering into bilateral negotiations with the Taliban in Afghanistan.

Deputy national security advisor Ben Rhodes announced last week that President Obama had decided on direct U.S. military support to the Syrian opposition. That opposition is led by al-Nusra, a terrorist group whose leader, Abou Mohammad al-Joulani, pledged fealty to al-Qaida leader Sheikh Ayman al-Zawahiri in April. Al-Nusra is known as the most well-organized element of the rebellion, and it has thousands of fighters opposing Iranian-backed Syrian dictator Bashar al-Assad. Nonetheless, President Obama explained, "the distinction I make is between extremists and those who are recognized in a 21st-century world that the way the Middle East is going to succeed is when you have governments that meet the aspirations of their people, that are tolerant, that are not sectarian."

How is an al-Qaida-centric rebellion non-sectarian and tolerant? It isn't. The rebels recently hacked off the head of a Christian and fed him to dogs, if local reports are to be believed. But that won't stop Obama from expending American tax dollars to help the beheaders.

Meanwhile, in Afghanistan, President Obama is preparing bilateral negotiations with the Taliban. This the same Taliban that chopped the heads off two young boys, aged 10 and 16, for supposedly accepting food from police in exchange for information. This is the same Taliban that still embraces shariah, and still holds an American soldier, Sergeant Bowe Bergdahl, captive. And yet this week, the Obama administration celebrated the opening of a Taliban office in Qatar. President Obama himself said that the office opening was a great first step toward reconciliation between the Taliban and the current government of Afghanistan.

There may be no easy solutions in Syria and Afghanistan. Both countries are plagued by tribal violence and sectarian warfare. But the U.S.' decision to get involved by backing the very people who slaughtered thousands of Americans on Sept. 11 is more than shortsighted. It is a ground shift in the American government's mentality with regard to the war on terror.

For a dozen years, American troops fought to remove the Taliban from power and to cripple al-Qaida. They fought to create safe ground for American allies and hostile ground for American enemies. Thanks to the Obama administration's morally relativistic, ignorant and confused policies with regard to the Middle East, it appears that their blood may have been spilled in vain.