Obama’s Inaugural: Hubris Will Bring Him Down 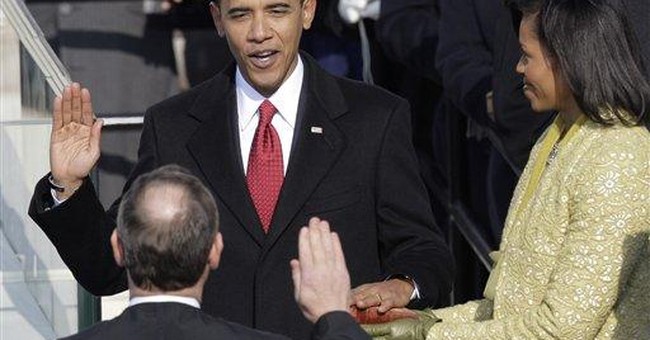 Obama’s inaugural address deflated us because it perfectly crystallized the quandary America now finds itself in: we wanted our faith renewed through a “transformational moment” -- but now we’ve got a faithless man for president. Obama has no faith in God’s stake in the American destiny; instead, God merely “calls on us to shape an uncertain destiny.” Despite his protestations to the contrary, Obama has no faith in Americans; instead, he wishes to change our hearts of stone for hearts of flesh: “we can no longer afford indifference to suffering outside our borders; nor can we consume the world’s resources without regard to effect.”

Obama has only one deep and abiding faith: faith in himself. He mentioned humility three times during his inaugural address. The gentleman doth protest too much. This inauguration, in Obama’s view, was about his personal elevation; his accession to the White House was “a moment that will define a generation,” a moment when the nation “set aside childish things.” Most evocatively, Obama cited his inauguration as a moment when all cynics were thrust aside because “the ground has shifted beneath them.” The imagery of Moses (Obama) facing down Korah (Rush Limbaugh and the political right) and the ground swallowing up Korah is unmistakable.

Obama’s faith in himself -- and by extension, faith in the government he leads -- is unshakeable. In his inaugural address, Obama dismissed the question of “whether our government is too big or too small.” Instead, he suggested, we should focus on “whether it works.” Yet there is apparently no situation in which Obama believes the government, led by Barack Obama, doesn’t work. The free market requires “a watchful eye”; “a nation cannot prosper long when it favors only the prosperous.” The government must build us “new roads and bridges,” “restore science to its rightful place,” “transform our schools and colleges and universities.” The government must bring about global equality via international redistribution: “poor nations … we pledge to work alongside you to make your farms flourish and let clean waters flow; to nourish starved bodies and feed hungry minds.” In Obama’s mind, the government he runs solves all problems and rights all wrongs.

What will happen when government fails?

Obama’s hubris -- the belief that he can do no wrong, that he can miraculously lead America to “harness the sun and the winds and the soil to fuel our cars and run our factories” -- will lead him to shift blame for his inevitable failures onto the shoulders of the American people.

Already, it has begun. If Obama’s policies fail, he will blame his partisan critics, the benighted Americans who refuse to acknowledge, “that the stale political arguments that have consumed us for so long no longer apply.” If our economy continues to shrink, as it certainly will under Obama’s “new New Deal,” Obama will blame our continued “collective failure to make hard choices and prepare the nation for a new age.”

In his fatal distrust of the American people, Obama echoes President Jimmy Carter. In his address, Obama noted a “profound … sapping of confidence across our land -- a nagging fear that America’s decline is inevitable, and that the next generation must lower its sights.” Here he echoes Carter, who famously declared an American “crisis of confidence … a crisis that strikes at the very heart and soul and spirit of our national will.”

This is dangerous stuff. Pessimism is a natural outgrowth of tough economic times, to be sure, but the American people do not believe that America’s decline is inevitable. In fact, the only commentators who have posited the inevitability of American decline are Obama and his supporters. As Obama puts it, “the world has changed, and we must change with it.”

But if Obama’s plans to “remake America” in the European image fail -- and, God willing, they will -- his grandiose self-involvement and blustering pomposity will lead him to condemn the very Americans who elected him. The meaning of Obama’s “transformational moment” will become naked in the light of day; it will become obvious that Obama’s election was Americans’ superfluous attempt to move beyond race, not a broad mandate to remold the country.

And Obama will learn the hard way that while Americans will never fail, presidents can.