Obama Can Use E-Mail, But He Can't Run A Country 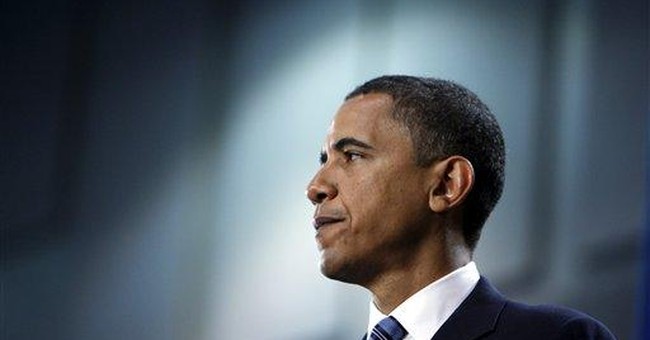 Last week, the Barack Obama campaign ran an ad against John McCain. The ad didn't target McCain on policy or even on personality -- it targeted him on his age. While a picture of a disco ball is seen, followed by one of McCain in huge square-framed glasses, the narrator announces, "1982!" "John McCain goes to Washington. Things have changed in the last 26 years. But McCain hasn't. He admits he still doesn't know how to use a computer. Can't send an e-mail After one president who was out of touch, we just can't afford more of the same."

It turns out that John McCain doesn't use e-mail because his Vietnam War injuries prevent him from comfortably using a keyboard. But let's assume for the sake of argument that McCain truly doesn't like e-mail. Let's assume that he hasn't mastered the art of the "send" button, that he doesn't forward chain e-mails, and that he doesn't know the difference between "reply" and "reply all."

President John McCain sits in the Oval Office, looking over the latest federal budget, shaking his head and striking items with a red pencil.

Suddenly, his laptop, which is open just for show -- the President doesn't use it all too often -- dings. "You've got mail!" a smarmy voice announces. McCain looks at the newfangled doodad and somehow manages to click open the e-mail, which is addressed to CrotchetyPOW@whitehouse.gov, sent at 7:15 PM EST.

"Mr. President," it reads, "this is Mikhail Saakashvili from Georgia. This morning, we received hard intelligence that the Russians are massing troops on our border with South Ossetia. If we do not act preemptively, we will be overrun. We want your assurance that the U.S. will stand behind us if we strike Russian forces this evening. If anything is reported, please feign ignorance, so that we may pursue our objectives -- but we must know that behind the scenes, we have U.S. support."

McCain's eyes go hard and cold. Then he pushes the "Reply" button and taps his message in with one finger: "Never heard anything. Kick some ass." The time is 7:23 PM.

The next day, the McCain administration explains that it is surprised to learn that Georgian forces have routed Russian troops in a surprise assault in South Ossetia. The Kremlin is furious. McCain spends the rest of the day cleaning up the diplomatic mess.

President Obama stands in the Oval Office, shooting wads of paper into the wastebasket. Every so often, he looks at the 1,000-page federal budget, grins happily and writes notes into the margin -- additional programs that require funding.

Suddenly, his brand new laptop dings. It's a piece of mail from Saakashvili, addressed to UniteBehindMe@whitehouse.gov. He's asking for Obama's permission to go through with a pre-emptive operation.

Obama stares at the e-mail. Then he types a reply, his fingers flying over the keyboard. "President Saakashvili," he writes, "you will have to forgive a slight delay. I must first consult with my advisors. Then I must consult with President Putin to hear his side of the story. I will get back to you shortly." Obama deletes the last word, substituting "as soon as I can, based on certain contingencies and considerations." Then he sends it.

A moment later, Obama unsends it. He deletes the text, then types, "Dear sir: Please understand that there are two sides to every story and that I have an excellent personal relationship with President Putin. I hope to talk to him about your military plans this evening by telephone." Obama sends it.

Thirty seconds later, Obama unsends it. He forwards Saakashvili's missive to his foreign policy team: Samantha Powers, Zbigniew Brzezinski, Robert Malley, Susan Rice. After an hour, he has replies from all of them. He sits down at his desk again. He begins typing. Then he deletes. Then he types some more. Then he deletes. Finally, after five hours of long, exhaustive editing, he sends it.

One minute later, he is shocked to find the email returned to him, marked MAILER-DAEMON@mfa.gov.ge. Five minutes later, he receives an email from Vlad@ln.mid.ru. "Dear President Obama," it reads, "Greetings from Tblisi! So sorry you missed Mikhail. But from now on, all mail addressed to President Saakashvili will be automatically forwarded to my e-mail account. He is indisposed at the present moment. I'm looking forward to speaking with you."

Obama stares at the screen, gaping. Then a satisfied smile crosses his face. He forwards Putin's message to his foreign policy team, with a short note: "Good news. Putin wants to talk."