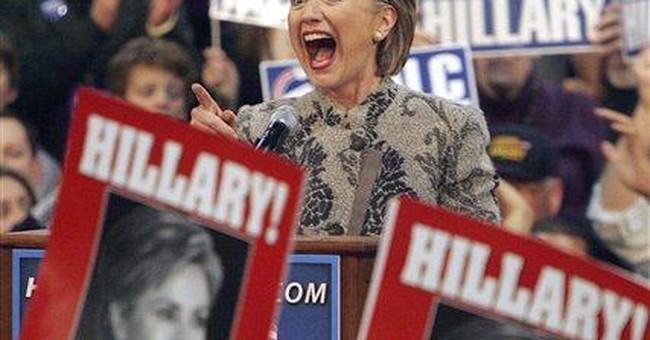 The battle between the two Democratic front-runners, Sen. Barack Obama, D-Ill., and Sen. Hillary Clinton, D-N.Y., is a battle of image. The two candidates largely agree on policy; they have voted with other Senate Democrats over 90 percent of the time. Yet voter reactions to the two candidates have varied wildly.

Why? As I explain in my new book about the history and politics of presidential image-making, "Project President: Bad Hair and Botox on the Road to the White House," voters rarely look at policy when they pull the lever for a politician -- we look instead at the person. We judge politicians the same way we judge other people: based on the image they project. Scientists say we judge whether a person is likeable, competent, attractive, trustworthy and aggressive within less than one-tenth of a second.

That means we judge our politicians by looking at their hair, their height, their age, their sense of humor, their rustic or urban feel. We judge them based on their vibe, their attitude. That first glance means everything -- and it always has.

George Washington crafted his image to meet the needs of his constituency: In June 1775, Washington showed up at the Second Continental Congress wearing his full dress uniform, attempting to impress his colleagues into appointing him chief commander of the American military. Abraham Lincoln used his 6'4" height to his advantage, towering over 5'4" "Little General" Stephen Douglas during the 1860 presidential race. And Warren G. Harding's tanned good looks won him the White House, despite his dramatic lack of rhetorical skill and political know-how.

Politicians know that Americans look at image, and they attempt to craft themselves accordingly. But the art of manipulation isn't that simple. Americans love cowboys, but not everyone can pull off the cowboy image -- Hillary Clinton would look foolish in a cowboy hat. Americans love military men, but not everyone can pull off the military image -- Michael Dukakis tanked his candidacy by sitting in a tank.

Politicians must find a winning image that fits them; they must find a winning image that is authentic. Voters can spot inauthenticity a mile away. Mike Huckabee seems authentic, comfortable in his wryly humorous backcountry skin. Mitt Romney seems slick and businesslike, which is probably why Republican voters -- even those who share his political convictions -- are less than enthusiastic about his candidacy.

Barack Obama's early success is based entirely on his image. Obama radiates authenticity -- he speaks about change and hope with the zeal of the newly converted. He's tall, young and black -- a fresh face -- and that image merges well with his high-flown rhetoric about the dawn of a new day. Obama's policy proposals are often vague, but that matters less than the fact that he projects an image voters like.

Until New Hampshire, Hillary Clinton's image was a disaster. As I write in "Project President," Hillary has severe image drawbacks. She seems shrill, harsh and unfriendly, particularly when she gets riled. She wears those ubiquitous pantsuits with an off-putting masculinity. She is so intent on proving she can play with the boys that she loses her strongest advantage over the boys: her status as a woman.

Historically Hillary experiences her highest popularity when she is least masculine. She translated her victimhood status during the Lewinsky affair into sky-high approval ratings. During the 2000 New York Senate race, she successfully played victim when opponent Rick Lazio approached her podium during a debate.

In New Hampshire, Hillary has rediscovered her winning image: the tough but oft-victimized, still-understanding female candidate. And so she sent her husband out to attack Obama rather than attacking him herself. She teared up while talking about the future of the nation. And she came from behind to eke out a victory in a state she should have won all along.

All indicators show that Hillary realizes she's stumbled onto her winning formula. "Over the last week, I listened to you, and in the process I found my own voice," she said in her New Hampshire victory speech. Hillary always had her own voice -- now she's learning how to polish it so that it reflects the desires of her constituency.

The image battle is far from over. But now that Hillary has realized the value of authentic image-making, it's a true race for the nomination.